I had these done before Hotlead, just haven't had time to blog about them.

So after last month's musing and list writing I put brush to figure and finished off these 12 Old Glory crew for my medieval field guns, and added a third Old Glory gun to the order of battle!

I decided to keep the liveries fairly generic. One crew in blue, one in red and one in yellow. Gunners, being highly paid specialists, could afford the bright colours. I had an ammunition box (from a RAFM ACW artillery limber) and a sponge in my bits box to dress one of the bases.

The gun in the middle is from Old Glory, the other two with the mantlets, I cannot remember who makes those now. I got them many years ago for Christmas when I still worked in the bookstore.

You'll also notice I'm also experimenting with some Army Painter meadow flower tufts to dress things up a bit. I rather like them. They add some nice variety to the ground work.

The bases are bit bigger to give the crew some elbow room; 50mm x 75mm. The guns aren't glued down in case they need to be abandoned.

Of course, now my armies will be unevenly matched in artillery, so to balance things out I will just have to get one of the Perry Wars of the Roses guns.

Next up are 5 stands each of some Old Glory levy bills and levy bows.
Posted by James at 5:30 PM 1 comment:

I haven't said much about my bunnies in a while.
Of course it's not like their daily adventures in sniffing, eating, sleeping and chewing on their boxes aren't extremely important to them. But they are much the same day to day.
Now our bunnies are 7 years old, which is pretty old for a bunny. The boys have been fixed since they were about 6 months old, and to avoid fights no one gets out at the same time anyway (except the mother and daughter who are room-mates).
So there is no worry about little bunnies.
But every once in a while, the hormones strike and one of the does will get all broody and make a nest and sit in it all day until the mood passes.
Mrs. Rabbitman came down stairs just before Hotlead to find this, with our caramel coloured doe happily nesting in it. 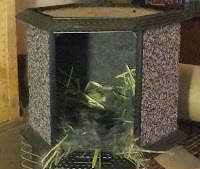 She may have been pleased with herself for getting most of the fur from her grey furred mother. Although Nigella didn't seem to mind (or be missing much of anything).
The hormones, they are not your friends.
Posted by James at 1:02 PM 1 comment:

Well, Mrs. Rabbitman and I are home and mostly unpacked and settled after another weekend managing the chaos at Hotlead. My lips are a bit cracked and my throat is sore, but that's from too much talking with everyone and then some very loud shouting and laughing last night with my friends, a beer and some dice, playing Peter and Keith's very nice Battle of Ridgeway game.

I've been quite busy this past month, feeling like one of those chaps spinning the plates in a Chinese circus, (or maybe juggling flaming alligators and chainsaws) so Hotlead wasn't quite as organized this year as usual. I almost had a hair ripping melt down on Thursday as I discovered a major SNAFU, but my lovely helpmate calmly got it all sorted and kept the wheels on the wagon and the ducks back in a row. Fortunately the Game Masters were all very good natured and understanding and rolled with my field improvisations.

My partner Martin was also able to get back to Canada in time to run a booth for J&M Miniatures, so Thursday night (and Friday after leaving the convention!) I was busily packing stuff into boxes and trying to make some paper price lists (with an online store you get used to not price tagging everything and not needing paper lists to refer too). What to bring? What to bring? A little of everything just in case. We sold a lot of 4Ground and PSC and Renedra as I thought we would, but even managed to shift some of the older Wargmes Factory and Warlord Pike and Shotte stuff too. The Maurice line did well too (we're now the Canadian distributor for Sam Mustafa rules). Too bad my big order (mostly Renedra, 4Ground and PSC of course!) for the show got hung up in customs.... But there are some satisfyingly empty spots on the shelves now and some cash to order some new things with. I only needed one lift in the car to get it home instead of the two to get it there (you can pack a surprising amount in an Echo).

The convention however, rolled along quite well. I booked more space for Friday night and that was successful with more games and gamers. Plus Saturday night was quite busy too with more games and gamers than last year as well. The spirit of generosity was present as a Waterloo area gamer loaned out his hex map to a GM from Michigan, with a "I'm going home, just give it to James when you're done and he can mail it back to me."

I haven't counted the tallies yet but we had more than 50 games and around 300 people there. The 10% cut we take from the Bring and Buy which we give to charity came to $830+. Mrs. Rabbitman and I noticed a lot more junior gamers getting to come for the first time with dad this year. So a THIRD generation of Hotlead attendees has begun (since some of the Jr. Gamers we had at the first Hotlead's are now adults and GMing for us!).

I also got a bit of a deal on a nice 1/72nd scale resin redoubt from Imex which I can see being occupied by some 15mm Prussian heavy guns and picked up some Osprey's in the Bring and Buy for a paltry $20; Campaign # 107 "Poland 1939" and one of their compendium books "Into the Reich, Battles on Germany's Western Frontier 1944-45".

And I did get to play a game this year! Keith and Peter had been working on a refight of the small, but significant Battle of Ridgeway (2 June 1866). The Canadian Militia fought their first battle against an invasion by the Fenian Brotherhood; a group of Irish-American Civil War veterans, who being drunk and having nothing better to do, decided to take a punch at the hated British by invading Canada. The Canadians, being inexperienced militia performed rather embarrassingly against the veteran Fenians.

Our game, using the Black Powder rules went true to history. Despite really appalling command rolls, we were pressing the Fenians hard and had almost turned their flank when some mounted Fenian scouts appeared and half of my command formed square and it all went pear-shaped. Still, loads of fun and some lovely figures and terrain. 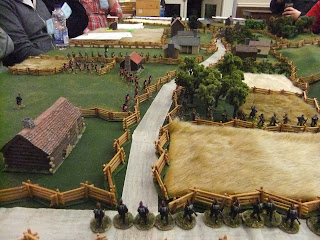 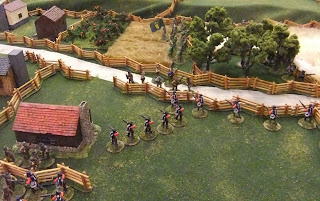 Once I get some links to other folk's pictures I'll post some more.
Posted by James at 3:18 PM 9 comments: