I was gifted some bags of excess figures by a friend. Some British and some Germans. The Brits and some of the Germans were kinda of old fashioned and boring sculpts without a lot of animation or detail. A lot of pioneers with mines and flamethrowers. Even my nephew turned his nose up at them when I offered. Some of the Germans were kinda of interesting; all late war helmet covers and zeltbahns, wielding StG44 assault rifles and panzerfausts. Enough to organize a platoon of Volksgrenadiers.

But the idea didn't stick and I wasn't too keen on painting them up. So I chucked them all in a box to sell off at Hotlead. (Trying to be clever this year and sort my Bring and Buy stuff out early instead of the night before.)

Then I had an even cleverer idea. So clever you could put a tail on it and call it a fox.

I chopped them in half.

I cut a bunch of 25mm by 30mm bases (a Flames of War small base I believe). Then I squirted on nice little rounds of caulking and smoothed these into roughly oval/rectangular embankments. Before the caulking dried I buried them in my fine sand.


The next day I shook them off and glued two half figures into each slit trench.

Don't worry, after the picture was taken I straightened out the squaddie leaning against his fellow.

So I've done all the Canadians and have enough for a dug in platoon. For the Germans however, it looks like I've got a couple of platoons worth with lots of MG42s once I fashion some more slit trenches for them.
Posted by James at 7:13 PM 8 comments: 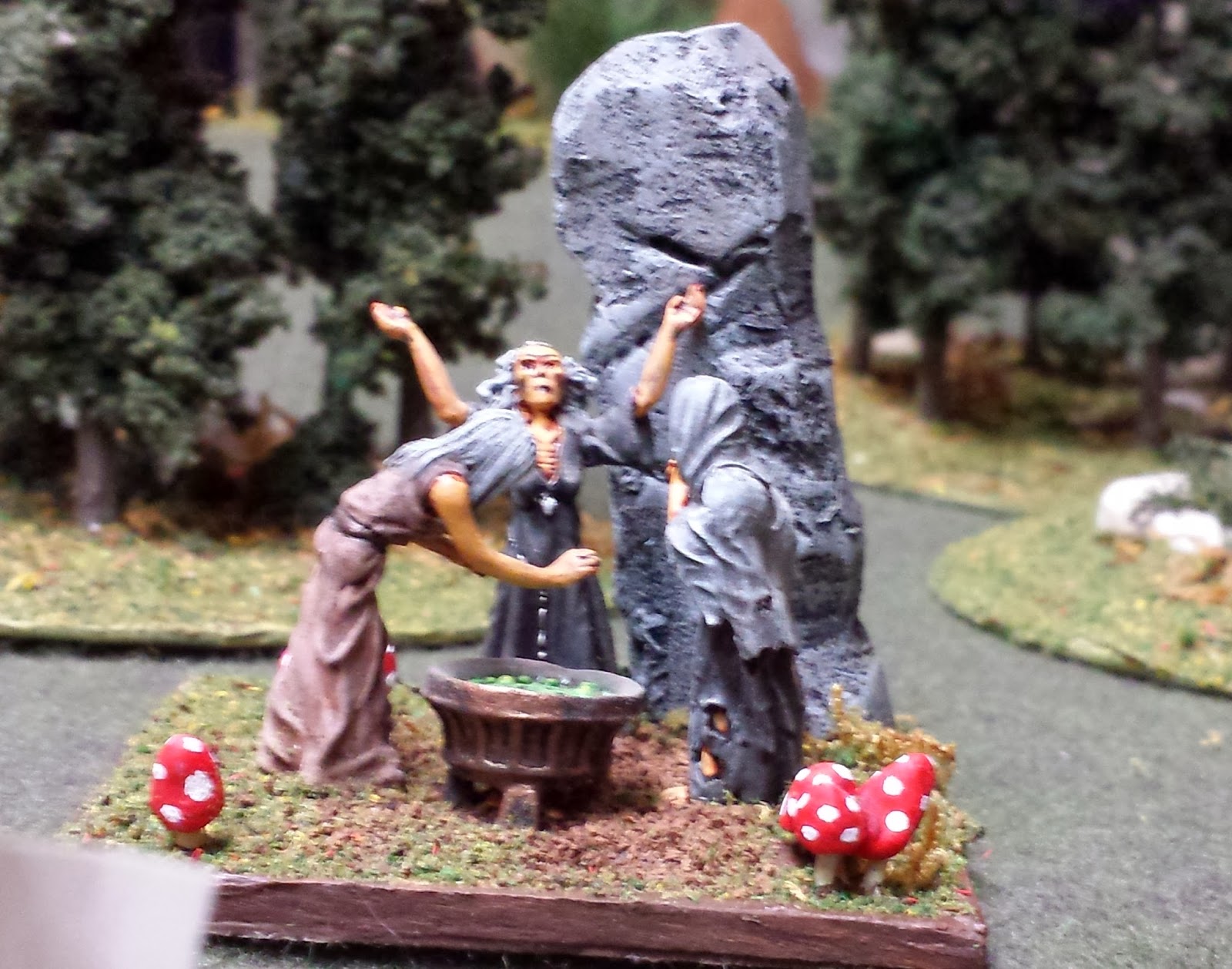 Of course once the rabbits have hopped off to the Big Warren in the Sky (and they are 8 years old now) there will be more room in the basement once again. I might even get a permanent painting table again!
Posted by James at 9:44 AM 1 comment:

The Hobbit 2: the Desolation of Canon

Daughter No. 2 had a bit of cabin fever during our Christmas holidays, so she suggested a delightful father-daughter movie matinee (we hadn't had one since her 5th birthday when I took her to see Disney's Hercules)to take in the second installment of Peter Jackson's latest epic, of The Hobbit: the Desolation of Smaug. Long time followers of this blog will know I am a complete and total hobbit-head. I would spend lottery winnings (should I ever get any) building a hobbit hole to live in. I think Tolkien is the greatest writer of the 20th century (as stated here). I really like the idea of second breakfast and try to have it as often as possible.

So last year I was rather disappointed by the first installment of the 3D Hi-Def thrill ride that has become the Hobbit. Of course, that movie was operating under the terrible burden of anticipation of a frothing fan who had been looking forward to it since he was maybe 12. Mrs. Rabbitman, with much lower expectations, was pleasantly surprised. I did see part 1 again later in the year, in 2D with no-Def and actually enjoyed it.

So this year I was resolved to get out and see part 2, before the 2D regular definition viewings were gone. Part 1 of course pre-warned me to Jackson's vision, so I sat back with a big bag of popcorn and just enjoyed the over-the-top, adrenaline fueled, thrill ride that only bears a passing resemblance to the beloved book.

Sadly I think all the deviations from the book added too much padding and took film time away from some parts that I really quite liked (such as Bilbo's teasing of the spiders). The fight with the spiders, cut short, the sojourn at Beorn's homestead, also cut short, the search for the door and waiting for Durin's Day, cut short,... everything just jammed together so we can have Tauriel the elf archer girl, the barrel chase scene (which I have to admit did give me a few laughs), a fight with Orcs in Laketown and Thorin and Company fighting Smaug in the caverns of the Lonely Mountain.

There were a lot of WTF? moments.

I did like the barrel chase scene, and Stephen Fry as the Master of Laketown was brilliant as usual.. I also liked the extra depth given to Bard. The whole political conflict added to Laketown was interesting too.

This fake movie poster from Cracked.com kind of sums up how I feel: 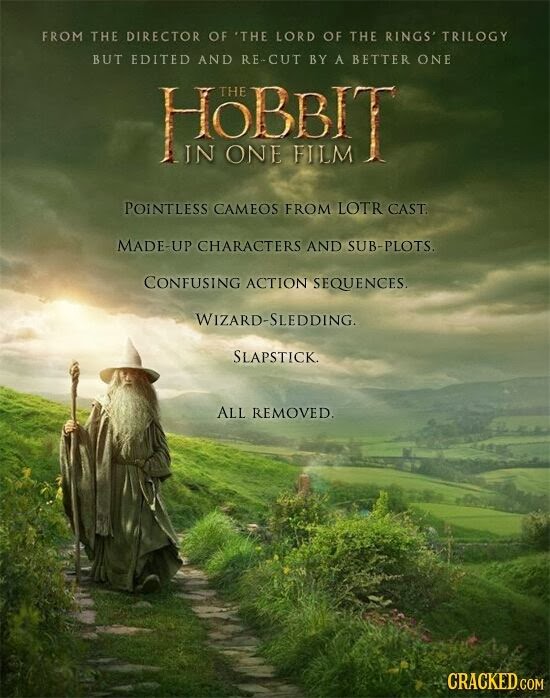 So I have rather mixed feelings. I will get the boxed, extended DVD set, if only to view the making of documentaries, because Peter has a lot of 'splainin' to do.
Posted by James at 6:02 PM 5 comments: