I haven't liked the way my SYW Prussian cavalry have been based for a while, but haven't done anything about it.

Originally they were all based 2 to a stand as set out in Warfare in the Age of Reason. But once I started building Austrian cavalry I decided I liked the look of 3 cavalry boot to boot on a 40mm wide base better.

So I decided it was time and rebased all seven 12 figure Prussian cavalry regiments. I also rebased 7 generals on round stands.

I used some sheet metal 40x30 bases from Renaissance Ink that are left over from painting Romans for Don many years ago. The uhlan regiment are on 40x40 bases to make them look more irregular.

An added benefit is they will.occupy a smaller space in the storage drawers, which are quite full now.
Posted by James at 8:33 PM No comments:

Had a couple of games of I Ain't Been Shot Mum lately, because 1. Scott is available (being temporarily free from mandatory overtime) and he likes WW2 and 2. I want to play with my new Soviet tanks.

Two weeks ago it was a Sept 1941 game; a German light panzer company (Pz IIs and Pz IIIs) with some panzer grenadiers and attached panzer jaeger 1s is rolling towards Moscow or Leningrad or something. In their way is a scratch force of infantry, 45mm AT guns and a KV2. A platoon of T34s and a mixed platoon of BT7s and the T26 are coming on to reinforce.

Mike and Dick were waaaay too cautious to be running the Germans. They sent one armour platoon to their left against a wooded hill to uncover a section of 45mm AT guns. A platoon of panzer grenadiers got bogged down in a fight for the village (featuring the spiffy Eastern European church Mike found for me at Fall-In last year). Dick went to the more open ground on the right and put a panzer zug in overwatch on the hill while his panzer grenadiers rolled forward under blind. The supporting Stuka missed anything of importance. Scott rolled his KV2 out to demolish Mike's lead panzer zug, causing the following one to hide behind some trees. The panzer jeager Is could've hurt it, but they were no where to be seen (Mike doesn't get the idea of overwatch or fire and maneuver or that maybe a wooded hill isn't the best objective for some tanks). When we called time, Scott was all set to unveil his second position behind the village, where the rest of the 45mm AT guns and the Maxim guns were ready to shred Dick's advancing grenadier zug.

The Soviet tanks were still coming up the road. I'd hoped for a nice armoured duel in the open ground on the German right. But no.


Onto the second game. I was thinking mid-war and putting the recently repainted PzIVs and my neglected Marders on table, but Scott suggested late war and using the King Tigers. Well the King Tigers haven't been out of the box either so, sure, why not? So surprisingly similar layout, except the bigger town was more thoroughly smashed. Desperate German rearguard holding back a Soviet advance somewhere in Eastern Europe in the fall of 1944. The Soviets have a company of 9x T34s (to Scott's chagrin the T34/85s aren't painted yet), a platoon of T70s and two companies of infantry, each of two weak platoons. One is rifle troops and the second is SMG armed assault troops. The company commander can call in support from a battery of 120mm mortars.

When we decided to call it we flipped quickly through the card deck to see that the German Paks and the until now idle King Tiger cards would come up before the T34s got to move or fire again. Some quick die rolling had all but two T34s now burning. So this Soviet advance was blunted.

Very similar games in retrospect except the Germans and Soviets traded places of terms of mission and quantity vs. quality. Although I suppose the second game was the more classic match up. I find the early lighter German armour a lot of fun and makes you think. It also shocks the heck out of players more used to 1943 or later German forces. I've noticed that many gamers, even when playing 1940-41 games still leave out the ubiquitous Panzer II.

But good to play with some, until now, unplayed with toys.
Posted by James at 9:58 AM No comments:

Knocked off a couple of things this icy weekend.

First a platoon of Battlefront PzIVGs that I've had painted plain dunkelgelb for years, erroneously thinking mid-war a lot didn't have the green brown camo added.

Sponging the camo on my Brumbars last year inspired me so I took advantage of a clear workspace to camo these up, ready for Italy or the Kursk salient. 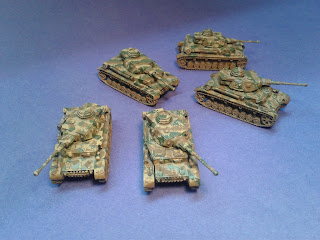 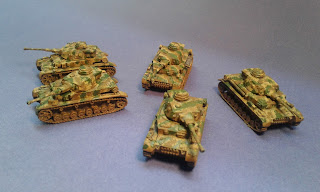 I also finished up that second hand T62 I bought last month, turning it into a derelict reminder of the Soviet invasion and following civil war that still littered the countryside even during Operation Medusa. 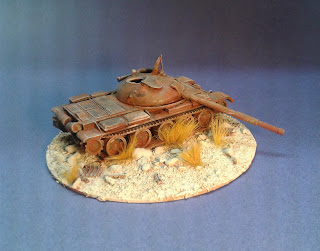 I broke open the hatches and reglued them into place. Removed the IR light and machine gun.  Broke some tracks. Broke the barrel and reset it at a depressed angle. Scrounged the fuel tanks from some spares and glued them on at an angle to look damaged. 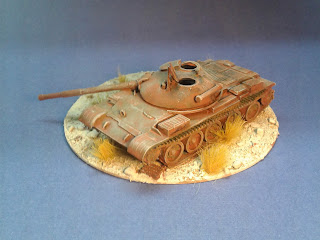 Dry brushed on some black scorch marks around the engine and turret. Then gave it a good ink wash for rust. Lastly a bit of dry brushed dust over all. 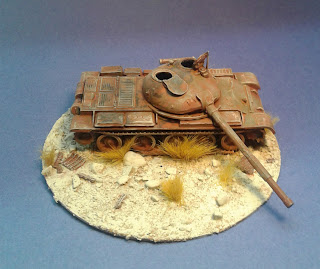 So some older tanks, painted up new and a new tank, painted up old.
Posted by James at 12:22 PM 1 comment:

Sorting out my gangsters

Looking back in my blog, I realize that I haven't touched my gangsters and cops in 10 years! With The Chicago Way I hope to change that, and come up with a boisterous game for 6 or so friends who can happily back stab, shoot and trash talk each other for an evening.

So this past weekend I started digging into boxes and sorting bits to keep and bits to reject. There's a lot to get rid of, but I'm pleased to find a lot that will do quite nicely with only a minimal effort.

I also renovated the bases on the figures. The grey caulking didn't really do it for me. On some figures it worked great and others it went on rather lumpy. Not feeling up to carving paving stones I opted for sand.


I did a test layout and determined that I need more buildings, sidewalks, and roads that aren't lumpy. But I do have lots of fire hydrants and trash cans.

Here is a 4x4 mat with intersecting streets (note the big empty quarter):

Retrieving the HO scale corner cafe from the reject box is a start, but not by much: 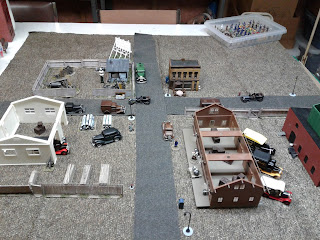 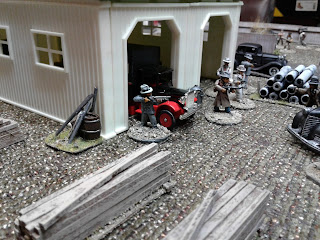 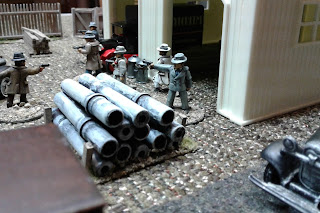 I'm tempted to make dedicated boards with set streets, sidewalks and alleys, and flat spots for the buildings. Then I could maybe add a ditch, or a section of river with a bridge. I could certainly have some grass and weeds in addition to the gravel at any rate.
Posted by James at 3:33 PM No comments: