The above picture encapsulates my Hotlead 2018 quite nicely﻿﻿﻿; friends and gaming combining into one perfect weekend of awesome. We'll start in the upper left and work our way clockwise. Everyone was pretty excited that my long time friend Don (almost 40 years, jeez we're old) was able to make it this year, flying in from Las Vegas, where he lives now.
"How are your 15mm Canadians doing?" he says. He's building 15mm WW2 Canadians as well for Flames of War.
"Fine, I guess. Why?"
"I think they need these" he says and pulls a box of Plastic Soldier Company M5 halftracks from behind his back. "Got them in the Bring and Buy. They were too good a price to pass up. But I already have 2 boxes and don't need a third."

Next is the book. Another Red Shirt (Hotlead staffers wear red shirts), Dave, hands me a grocery bag wrapped around a book. "This is for  you."
Inside is a first edition of Flashman and the Mountain of Light which he found at Attic Books, very excellent used bookstore in his home town. He already has a copy. I think he has a full set of first edition Flashman's actually.
But Mountain of Light is one of my favourites, having read it many times. It was the first Flashman adventure I owned.

Then the jar. It contains sweet pickled baby corn, a Waterloo County delicacy which is impossible to find anywhere else. My paternal grandparents were Waterloo County German stock and it is a taste of Grandma's house. I made this observation at the funeral for my uncle, who had been Red Shirt Dan's (aka Pasha Dan) Graduate Advisor. The funeral being held at a very old world traditional Catholic church (same one I'd been baptised in) featured sweet pickled baby corn along with the Catholic Women's League egg and tuna salad sandwiches. So Dan got me a jar at a very nice deli near where his daughter works.

The cool Legio XX Valeria Victrix tee shirt was also a gift from Don, who bought two for himself. These were being sold by a new vendor at Hotlead. A young man who'd been tagging along with his dad, one of our regular GMs for many years.

Finally we have my own purchases. On top of the shirt are three nice Hirst Arts pieces; two barrels and one tub. All three cast in dental plaster and nicely painted with water effect added. Got all three for $5. Another small dealer, who is selling off a large collection of stuff had a 1/72nd scale T-62 going for $5. It wasn't in great shape but that's OK. I've been looking for a used T-55 or T-62 to turn into a wreck for  my Afghanistan terrain for a few years.

Underneath the tank is an Osprey Special Operations Forces in Afghanistan. It might give me some scenario ideas at least. But holy acronyms Sergeant Major! Every sentence is stuffed full of letters which aren't all covered in the glossary at the front and sometimes leave me flipping back through pages to find the first usage. "The AFO and CAG met with ODA 567 and AMF to conduct SSEs on the AOR. Meanwhile SASR conducted SR ops in the Pokara area." Get the idea? But the thought of my SF operators storming an opium factory sounds kinda fun.

Finally, a rule book. The Chicago Way by Great Escape Games. Saturday night I played an uproariously fun game put on by Matthew (see his blog Oldenhammer in Toronto) using Dead Man's Hand. Well The Chicago Way is just Dead Man's Hand with cars and tommy guns. So I thought maybe I could resurrect my neglected gangsters and G-Men instead of selling them off, and like Matthew, create a nice tight game for 4-6 players. Matthew has posted a very nice write up of it, with many pictures here on his excellent blog. I'm going to steal his blackjack activation too.

This year went stupendously well thanks to Mrs Rabbitman on Registration and Admin, and Michelle on Event Coordinating. Records were broken in attendance, games played and dollars moved at the Bring and Buy. The team of Red Shirted Minions are now just doing their thing with minimal direction and I'm not sure what I do anymore except look good and act as ring master.
An album of photos and relevant stats will soon be up at www.hotlead.ca.


But there are various posts already up on the web:
Hot Dice Miniatures
A YouTube video (you will see Mrs. Rabbitman hard at work on the sign in desk in the opening seconds):

Must Contain Minis did several posts about his time at Hotlead including one featuring my friend Mikey's old school ACW ironclad game (in 15mm with scratch build ironclads) and the Hobbit SBG tournament which featured really amazing terrain boards.

Now for some pictures:


There were many more games obviouslybut I'm trying not to repeat some of the already excellent coverage out there (like the links to blogs above). Plus it is a chore posting a large volume of pictures from my phone, since my tablet seems to have packed it in Friday night while I was trying to take pictures. If you do Facebook there are a ton of pctures posted to the Hotlead Facebook Group.
Posted by James at 9:39 AM 2 comments:

A few fits and starts as I stumble towards something.

Got all of my spacesuited figures painted. I decided to do a large percentage of them in a low visibility greenish grey as pirates/raiders/Outer Planet Alliance radicals to fight the security forces and armed colonists (until I buy some power armoured marines from Ground Zero Games). 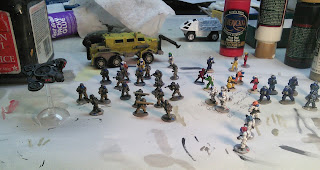 You'll notice that the drone is done too and I'm overpainting some Matchbox toy vehicles. The yellow thing is a Bison mine clearing truck, which came in a lovely grey digital camo pattern. My colonists don't need mine clearing, but I thought doing it in some dirty yellow and it can be a survey vehicle. It scales nicely with the 15mm figures.

I've also been sorting armament for the Imp APCs. Mounted the second missile system on a metal collar that I stuck in my pocket during a job I had making Toyota parts 10 years ago. This will make it a base defense system to be attacked by commandos etc. Still not happy with the gun turret for the second tank, just don't like the look. Found the red box abandoned on a work bench. I like the natural wear on the printed logo. I cut the yellow number panel from the label sticker and distressed it with some isopropyl alcohol. It will make another nice shipping container.

Finally, while pondering the defensive missile launcher I remembered this stashed on a shelf: 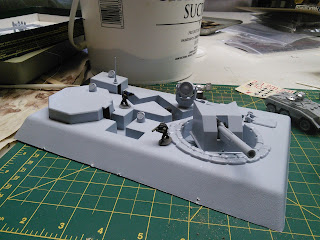 I don't think that the searchlight and naval gun quite fit. But how about this? 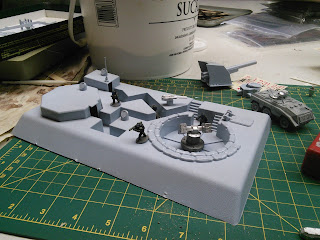 The 15mm figures work well and fit in the trenches. Should figure out some doors on the bunkers though.

And there's Hotlead next weekend!
Posted by James at 1:47 PM 2 comments: