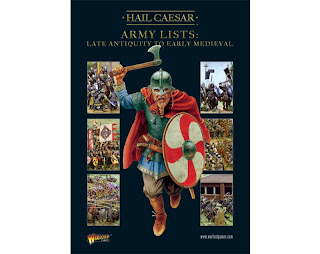 Hail Caesar Army Lists: Late Antiquity to Early Medieval
by Rick Priestley
Warlord Games Ltd. 2012
84pp paperback
GBP 18.00 (CDN$29.00)
This just arrived in my mail box for review. It's a welcome addition to the Hail Caesar rules. The late antiquity and early medieval eras being very popular with a lot of wargamers. I would hazard a guess that they are even more popular than the Classical Era covered in the first book (except the Romans and their enemies). There does seem to be a resurgent interest in Vikings and Saxons at least and the Later Roman Empire is a perrenial favourite.
Or maybe I just say that because I like the time span covered myself. I think I have at least 4 armies for this book and I suspect I could use the stats from the "Later Welsh" and "Plantagenet English" lists to work up some later Medieval lists as well.
The following armys are included:
Some of these, like Ghaznavids or Khitan-Liao, I doubt are seen outside of Society of Ancients tournaments, but Mr. Priestley is trying to cover the most popular armies already out there so people can play with what they already have rather than only focusing on what Warlord Games sells. Plus the kingdoms of ancient Central Asia did field some very visually attractive and interesting armies. I think a campaign setting between rival city states could be amusing and refreshingly unfettered by too much background knowledge like when you try to do a similar game set in Medieval Europe.
Most of the army lists are one page. A few are two pages long. Each list has a brief overview to set the context and give the thoughts behind the list. Then there is the table of composition guidelines letting you know how much of your army should be the major troop types (a random example from the Feudal French list; "Cavalry 25%+" At least a quarter of your units must be cavalry, followed by "Knights 50%+ of cavalry" so at least half of your units of cavalry must be knights). This is then followed by the table of Troop Values letting you know among other things that the aforementioned knights are Clash 9 Sustained 6 SR 3/0 LR 0 Save 4+ and Stamina 6 with the 'Eager' rule. You can also upgrade them to 'wild fighters' and 'stubborn' if the horses are armoured. Sergeants are much the same but without the 'eager' and 'wild fighter' rules.

Even without resorting to the points values I've found the previous volume very useful. Having some pre-established Troop Values to work from speeds up getting the game going. I find I just don't have the spare time these days to work up new troop values for every scenario.

So let's take a look at a couple of my oldest armies; Sassanid Persians and Late Imperial Romans. I always start with the core units and build around them, letting their number determine how much of everything else I can take.

50%+  of my Persian army has to be cavalry and up to half of that can be the Savaran heavies.

I like clibanari and cataphracts a lot so why wouldn't I?

Right 4 units of Savaran heavies with kontos and bow (36 pts) it is then. I'll upgrade two units to 'elite' (+3 ea). So now I've got to pick 4 assorted units of light cavalry with javelins and bows (21 pts ea).

With 8 units of cavalry I can now choose up to 8 units of infantry. Remember the size of the unit is up to you. My heavy cavalry are in units of 6 figures and the light cavalry are 'small' units so only 4 figures on the same frontage. Infantry are composed of 12 figures. The list gives a generous choice in how to depict Sassanid infantry (about which there is considerable debate). You can go with the old WRG medium infantry levy rubbish, or just plain medium spearmen or a mixed spear and bow unit. You can also portray up to 25% of them as heavy infantry if that's the way you want to go. I'm going to go with 4 units of medium spearmen (23 pts) and 4 units of archers (21 pts). I'll support my cavalry with 4 small units of skirmishers with javelins (11 pts) and slings (12 pts). 10% of my units can be elephants so I'll take two of those please (24 pts). Divisional commanders are free. If my math is correct that comes to 504 pts for a nice little army.

I'll group the cavalry into two divisions on the wings, each of 2 units of Savaran and 2 light cavalry with a unit of skirmishers. The infantry will be in one big division in the center. Medium spearmen up front supported by the archers behind. Screened in front by the rest of the skirmishers and the elephants.

I can see already that I need to add some more medium spear and archers to my collection if I want to field the rest of my heavy cavalry!

Next up the Romans:

At least 25% of the army must be infantry and another 25% must be cavalry. Pretty straight forward and leaves you lots of flexibility.

The infantry core will be some Legio Comitenses; heavy infantry with heavy throwing weapons and spears, armour, and drilled. 4 units. 32 pts each. I'll add in a unit of Scholae Palatina who are 'drilled, elite and brave' for 35 pts. I'm going to support these with 5 small units of light infantry archers at 14 pts each. So that's 233 pts on my infantry.

For the cavalry we'll start with 4 units of regular medium cavalry with javelins (27 pts). Two units of heavy cavalry (30 pts). I'll upgrade one unit to cataphracts with kontos (+4 pts). 3 small units of horse archers (19 pts). This leaves me with 40 points to buy some artillery or more auxiliary troops or upgrade the ones I have.

I did think the lack of barbaric auxiliaries other than Huns was an odd omission but that can be easily fixed by flipping the page to the Goth or Frankish army list if you want to add a division of Feoderati. The lack of distinction between Auxilia and Legionaries is covered in the discussion of the Middle Empire list, but the stats for Light Infantry Lanciarii could just as easily be used for Auxilia Palatina.

The lists all seem pretty straightforward. Some of the differences are quite subtle; Norman knights can have 'tough fighters' and 'frenzied charge' but Feudal French knights get 'eager' and 'wild fighters'. Both troops otherwise have the same basic stat line. German feudal knights don't get any special rules until they upgrade to armoured horses and become 'stubborn'. The Army Composition Guidelines push the player to reasonably balanced orders of battle. You can have your elite supertroopers (usually limited to one unit) but you have to take the right proportion of spear fodder too.

The eye candy is also nice. There are lots of pictures of Phil Hendry's inspiring Middle Imperial army, which I'd love to duplicate someday.

If you want to do your own research and develope your own army lists, by all means do so and save yourself the money, but for the rest of us this is a highly useful and recommended resource for our Hail Caesar games. This is now available in my store for $29.00.

I should add that even though my name appears in the credits in this book I did not do anything that I know of, unless some of my comments on the Hail Caesar Yahoo Group were particularly useful. I did help proof read a draft of the first volume and I assume they cut and pasted the text while doing the layout for the second. It is a small matter, but I don't want anyone to think my objectivity has been corrupted.
Posted by James at 8:50 AM