Well the Great Rebasing has progressed somewhat. At least to the point where I've got enough to show off. I started with late Medieval figures many years ago. Since I couldn't focus and 15th century armour was pretty much the same across Europe, I started trying to make my army morphable. By changing the flags and swapping out certain core units I wanted to be able to field Swiss, Burgundians, German Imperial, Hussites, Wars of the Roses English, Hundred Years War English and HYW French.

Like all compromises it hasn't been totally satisfying. I never got a Hussite wagonburg built. And my selection of French cavalry has been fairly crappy. It's also resulted in having an awful lot of pikemen and dismounted knights. I think sometimes, too many.

But here are some pictures of their first incarnation, the Burgundian Ordonnance Company army of Charles the Bold (1433-1477). 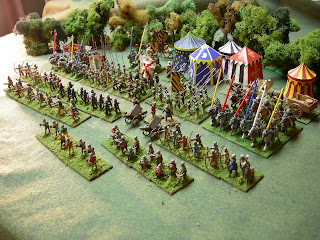 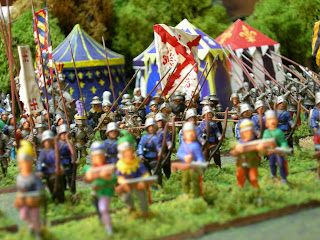 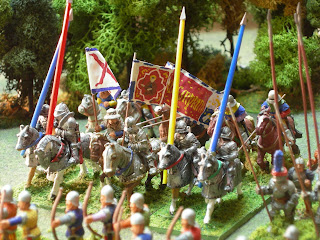 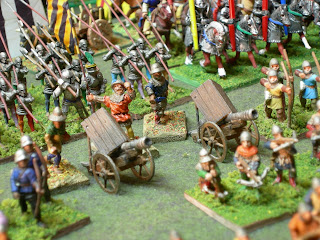 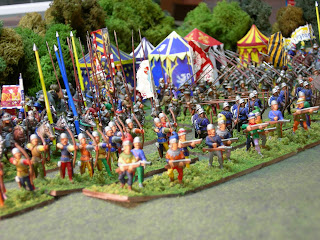 The manufacture of figures runs from some old Minifigs archers, quite a few Essex and Citadel, Hotspur crossbowmen (Hotspur were apprently bought by Old Glory to start their Revenge Medieval line), Naismith and I'm not sure of the make of the guns. I got the gens d'armes second hand and had to re-equip them with new lances made from cocktail skewers.

The tentage is a mix of resin and some card from an old issue of White Dwarf magazine.

The banners are all handpainted on foil scavenged from old toothpaste tubes. Sadly that source of material has been replaced by plastic. I`d like it if the army had more banners.

There are some other units not pictured that I add in to grow the army; some assorted Medieval chivalry to represent low grade Feudal troops, two companies of pavised crossbowmen and some halberdiers. They`ll also borrow more of my Wars of the Roses longbowmen too if required.

Here are some shots of Charles himself, newly rebased with his ducal banner. 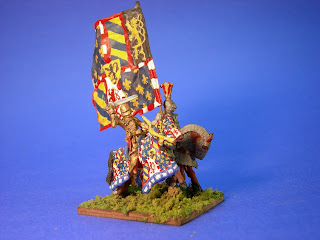 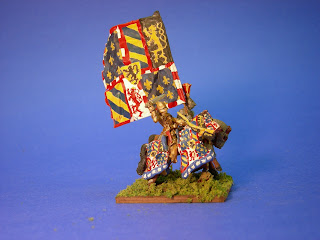 Charles is I think, an old RAFM figure but is now out of production. He used to be wielding an axe, but it broke off recently and had to be replaced with a sword cut from a fantasy figure. Charles won me Best Historical Single Figure at MIGSCON way back in 1990 (which tells you something about the improvement in painting standards over the last few decades). The knight carrying the banner is a Citadel figure. 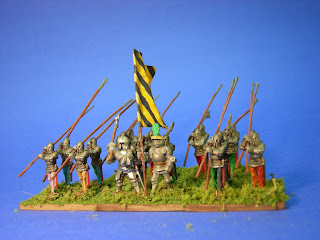 Mercenary pike mostly made by Naismith. I first showed them to you here, but they`ve been rebased. The ensign is another Citadel figure and I don't know who made the captain, but I put him in because his helmet matched the rest. They're from the Naismith Italian Wars range, but because of a picture in an Osprey I think of them as being Flemish. The pikes are lead and I'm always straightening them. 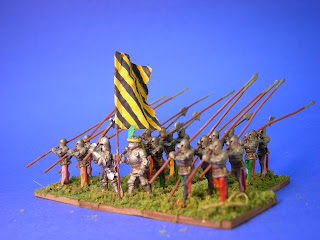 A couple of commanders with their personal banners. More Citadel figures with made up heraldry. 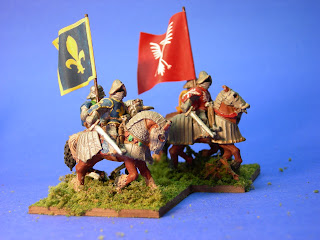 Finally a preview of the Swiss! These are mostly Old Glory with some Essex command in the middle. I`ve got over 2 dozen stands waiting to be painted and flocked. About half are OG and the other half a mix of Essex and unknown second hand figures. The army is brutally simple but the cantonal colours are visually pleasing. 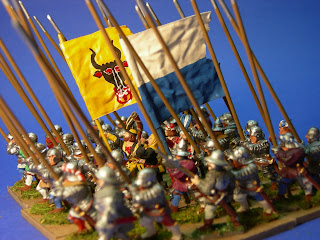 Not quite the mighty Hedgehogs of Doom that gave the Germans and Burgundians such a hard time in the 14th and 15th centuries. They need more of everything; more pikes, more halberdiers, more skirmishers and their own artillery and cavalry. But they`re closing in and already have had a pretty decent record of pushing Charles off the table edge.﻿
﻿ 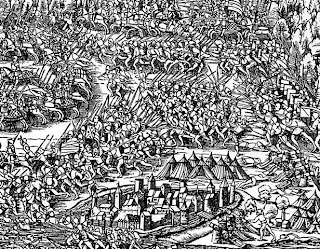