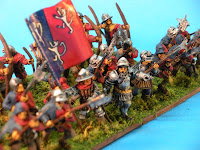 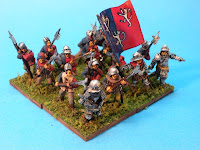 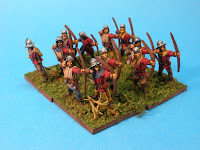 Back in December 08 when I was first laid off and thinking naively that I'd be back to work in March of 09, I thought "Good time to revisit my Medieval armies and revise my rules."
So I spent the Christmas season rebasing all of my many Medieval figures who had been based on balsa wood, with plaster of paris and to the old WRG frontages!
Yikes.
A pikeman on a single 15mm wide base doesn't stand up very well. The bigger bases made from the balsa were all warped and the plaster was chipped off.
Time for a rethink.
I'd been looking at other armies on the blogosphere and liked the square 40x40 bases. So off I went and cut out a sheet of nice art board (it has a thin layer of plastic sandwhiched in the center to give it strength and prevent warping) into dozens of squares and standardized my basing. 2 skirmishers, 3 archers or 4 heavy foot on a base. 2 cavalry on a 40x50mm base.
I also had a good start on an Old Glory Wars of the Roses army in my horde of unpainted lead. I got them in trade from a friend for some painting. Working on my Medieval rules (Blood & Chivalry) inspired me to do up some more foot. You can never have too many longbowmen or polearmed infantry for playing the Wars of the Roses scenarios. So here they are. The flag is from the Lance and Longbow Society, I can't remember whose banner it is though.
Posted by James at 7:59 AM