I've been getting back to the second edition of my Medieval rules Blood & Chivalry a bit lately. Although working 45+ hours a week doesn't help much. If I had a reliable laptop then I guess the hour lunches could be put to better use.

Earlier versions were pretty chart and factor heavy. I think I counted over 2 dozen positive and negative modifiers on the morale chart! That's probably too many. Plus I've been pondering the subtleties of the Black Powder mechanics. Do you incrase a unit's base combat value or make all men equal and then add modifiers for weapons and training?

I've realized that with some troops (like the Swiss) I've double dipped; giving them a bigger combat value because of their reputation plus giving them bonuses for weapon type and formation used. Although the 'special rule' system of BP can get annoying and hard to keep track of.

Of course, perhaps a deep column of really fierce Swiss cantonal troops armed with nasty halberds and pikes should get more than the usual bonuses?

I've also been inspired by some of the lovely Medieval armies out on the blogosphere (and another here and here) to carry on with the Great Rebasing of my Medieval armies which started way back during the Christmas holidays of 2008. I've got everybody (except my Feudals) rebased on to regular sized stands but they need flocking. Lots of flocking. 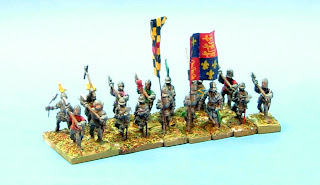 Now I've got everyone onto 40mm by 40mm squares (50mm deep for cavalry) like this: 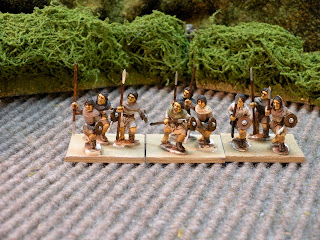 ﻿
But that's not very photogenic is it?
I'd like to get everyone to this stage: 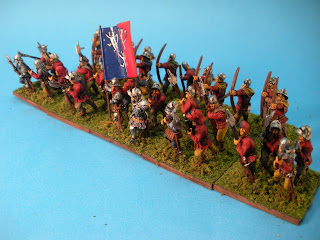 I was tired the other afternoon, but wanted to paint, so I managed to slop a lot of brown paint onto stands. Still a few dozen to go though. But the next rainy Sunday afternoon should see a flocking good time. Then I can do a battle report with proper pictures!
Posted by James at 10:05 AM