I've had these 15mm tanks almost done for a while now. They sat in a box assembled and primed for a year. Then in between commissions I got them base coated where they sat for another while. Then they got their dunkelgelb on. More waiting in their box. So while getting Ron's 25mm Canadians prepped I decided to finish up the German armour for Kampfgruppe Hotlead (which I blogged about last year).

Although scenarios requiring Tiger tanks have been thin on the ground with my group's emphasis on early to mid-war or the Italian theater. But now that I've been reading about the Normandy campaign and North West Europe... well it'd be a shame not to have a few, wouldn't it?

Since this posting has become rather picture heavy, I've made all the thumb-nails smaller to speed page loading.

First up, some PzIIIMs. Nice mid-war tank (I've got a thing for schurzen). Useful in late war for a command tank or artillery FOO vehicle. Some of them even soldiered on in secondary theaters. These are Old Glory models.

﻿ ﻿﻿ Next the Tiger I platoon. These are Battlefront models with resin hull and turret. The metal gun barrel makes the turret a bit unbalanced. 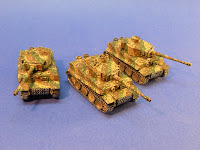 With lots of area to work with, I decided to try my hand at the famous 'ambush pattern' camouflage.

Just for completeness sake, there is a platoon of every Germano-panzerphile's wet-dream; the King Tigers. These are Old Glory models, with a cut down artillery officer for the commander. 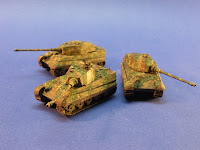 Here's a couple of comparison shots of the beginning and end of my German armour stable:

As far as main battle tanks go, my German armour inventory is pretty complete now. I even have a few representative SP guns and tank hunters, but I don't have some of the late war models like the Hetzer or Panzer Jaeger IV (yet). Since I usually have artillery off board, SP guns like the Wespe or Hummel are a luxury.

﻿ ﻿ The only vehicles I have left for the Germans are another pair of 234 armoured cars (another 234/1 and a Puma given to me by Ron), a platoon of half tracks that will get late war camo and a bag of Old Glory Opel Blitz trucks. All are awaiting assembly.
Posted by James at 3:28 PM