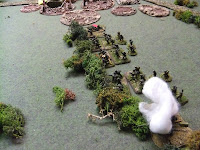 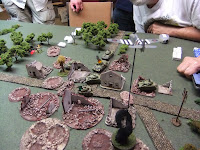 The Canadians had taken about 50% casualties in men and tanks (damaged, immobilized and totally brewed up). The Germans had lost about 25% of their men and still held the crossroads. Without a set piece attack with proper artillery and more infantry, I don't think 3CID  will be getting the cross roads. Of course if the 12th SS can mount a quick counter attack the Canadians would be bundled right back to their start line if brigade doesn't get some AT guns and Vickers MMGs up soon.
Posted by James at 5:44 PM