Had a very good Hotlead this year (my AAR covering the games is in yesterday's post). I didn't find everything I was looking for (like a hard copy of Dragon Rampant), but enough and even found a few things I wasn't looking for.

I think this year will see more WW2 action.

One of the vendors was a chap blowing out his stock from his now closed Flames of War store. I'd been thinking that my Germans needed a few more SP guns and these Brummbärs at 5 dollars each were too cheap to pass up.

Didn't notice until I got them home that one is a late model with MG42 ball mount and schurzen, and the other is an early model. Silly me. But I don't think my Germans will mind. Fortunately for the wallet he didn't have any Panzerjaeger IVs or Hetzters.

Then on Sunday while I was availing myself of the coffee nearby, I thought "Hey! I bet he's got Russians." Sure enough. At 10 bucks a blister pack I've got enough regular infantry and SMG troops for Chain of Command.

For Saturday's Bring and Buy a chap I know was lugging in a box. " Oooh, watcha got?"
"My Flames of War stuff"
So I grabbed his pack of nicely painted up entrenchments and told Scott that he really needed a US Armoured Combat Team. Which he decided he did.

Bought some terrain bits from Ontario Hobbit Adventures, who were mostly demoing the Games Workshop Hobbit game on a couple of very nice little boards.


A pack of Renedra plastic gabions for mediaeval and fantasy siege lines. 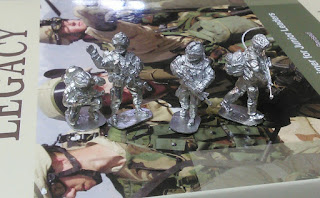 And some free books. Although the one about Sam Hughes is on extended loan.