A newly retired acquaintance said he'd like to come for a game and he'd never played either of the Two Fat Lardies WW2 rules. So after a bit of email discussion a date was set and I devised a scenario.

The objective for this game was two fold: introduce Don to I Ain't Been Shot Mum, and get some unplayed kit on the table. A straight forward set piece attack then. Late war, North West Europe, two understrength companies as the first wave of a battalion attack on a German defensive line. The two companies are supported by a troop of Churchill tanks, the battalions Wasps, a Churchill AVRE and a FOO. The British are hampered by the "Hesitant Troops" card but they do get "Heroic Leader" and "Rally".

The Germans have two understrength platoons, a pair of Pak40 AT guns, plenty of MG42s and entrenchments plus my new Brummbärs. The Germans are hampered by "Ammo shortage" and "Breakdown" but they get the "Bonus MG Fire".
Artie crouched under a wet hedge with his company and surveyed the pile of rubble that the maps called Grochstadt. His friend from B Company came up beside him.

"All right, there Artie?"
"All right Bert. You?" Bert's company was to envelope Grochstadt from the right while he attacked from the front. They had tanks and flame throwing Wasp carriers, but he still didn't like it. The 4th Battalion, Blandingshire Fusiliers had lost a lot of men in Normandy and Holland. The companies were barely platoons.

"Righto, then. See you on the objective." Bert stuck out his hand. Artie shook it and they both repeated the Regimental cry "What ho, Blandingshires!" with a chuckle.

Bert disappeared into the predawn gloom to rejoin his company before the attack.

Artie checked his watch and looked to the platoons on his left and right. It was time. He waved everyone forward and they stepped off to cross another field.

A company stalled at a line of bushes. Artie could hear smalls arms crackle to his right as B Company bumped the defenders lining the road. High velocity AT shot screamed over the Churchill tanks deploying from the woods.

Finally he got his men moving across the last field towards the still quiet town. 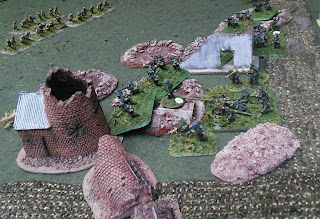 Where was the bloody artillery? His platoon on the far left started to go to ground in the middle of the field.
"C'mon! Keep going!" He waved them forward.
The young Lieutenant jumped up, waving his sten gun. "What ho Blandingshires!" he cried and charged forward. The rest of the platoon got up and followed straight into disaster.
As they neared the ruined town the rubble erupted with the sparks of small arms fire and the shredding paper sound of several German MGs.

A vicious fight ensued but only a handful of the platoon came stumbling back dragging a few wounded with them.

Over to the right he could hear the sound of rifle and Bren fire answered by more MG42s. 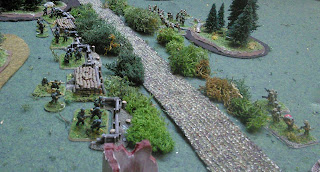 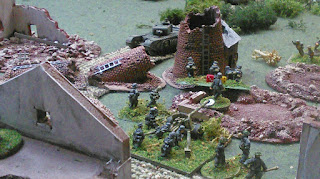 A  big Churchill AVRE clanked up to try and blast the defenders out of their rubble.
With a whoosh and a godawful bang, a panzerschrek rocket roared out of the town and hit the big tank squarely, brewing it up.
Their supporting armour started engaging some big German assault guns, with little effect to either side. Except they weren't supporting his remaining platoon trying to assault the town.

Things were stalling, and his company was getting cut apart in front of the town. He grabbed the driver of his company HQ carrier. "Get up their and get the Bren on that fucking MG nest!" The corporal put the machine in gear and off it rattled, bullets pinging off it's sides. Soon the Bren gun was chattering away in answer. He then got his other platoon to press it's attack and after a vicious exchange of grenades and close range rifle fire they had a foot hold in the rubble. 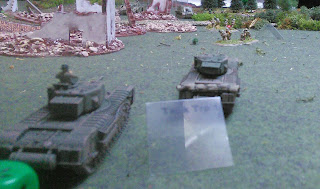 More clanking behind him as the Wasps from the Carrier platoon finally got clear of the hedge.
"Where the hell have you been?"
He ran to each carrier, directing it's deadly flame onto the Pak nest and the MG42 nests that had caused him so much grief.
Only a few Germans were left to surrender in shock or run away in terror.

What remained of A Company dug in among the rubble and got a brew up started. B Company was still tangled up in the hedges along the road clearing the Germans out of  some trenches and bunkers. But C and D Company were coming up and the German SP guns were backing off covering the retreat of the surviving grenadiers.

God what a mess. Artie surveyed the damage as he positioned his men to defend the rubble. The Padre and the stretcher carriers were coming up searching for wounded and taking them back to the RAP. 3 Platoon had been pretty much wiped out on the far edge of Grochsadt, caught by fire from a bunker while trying to knock out a second German Pak. Good old Bertie had caught a bullet trying to cheer his lads on to the end.

Artie sat down on a broken wall, suddenly very tired. He fumbled with this pipe as his driver shoved a tin cup of tea into his hand.
"All right there, Sir?"
"All right, Herb. Cheers."

It was a pretty bloody game. 2 Platoon rushing into the German MGs without support or suppressive fires was devastating. The AVRE would've been great for blasting the Germans out of their defenses but a stalking Panzerschrek team got it's card first. The Wasps once they finally showed up were pretty devastating, which was good for the Blandingshires, as the attack was running out of steam.

It's been a few years since I played IABSM, so it was good to dust them off and play something bigger. I forgot a few things of course. I need to make markers to remind me that units are pinned or suppressed.

You'll also notice some clear plastic markers with unit labels on them. These are to remind the players which units are activated by which cards.

The Blandingshire Fusiliers are my fictitious British regiment from my Colonial gaming with the BGen Sir Percival Gronville Wooster, VC KCBE.

My friends running the British managed to have fun. Don would like to give the rules another try. My Churchills, Brummbars, Wasps and AVRE all got some game time. So objectives met.
Posted by James at 8:30 AM