Wave 2 of the Army of Hollin begins to arrive.

I bought these Vendel Elves in the winter from someone on the Lead Adventures Forum and got them in April when my friend Peter could collect them during a trip to England.

During clean up I noticed a lot of problems associated with worn out moulds; heavy flash and several frightening holes in the cloaks on the archers. At first I thought to make it work for me, giving the cloaks a worn out campaign look. But the hand maidens of Naleth weave better stuff than that so I filled them in with epoxy I already had mixed for gluing on spears. Some of the flash at the face and cloak I couldn't remove and just covered in paint to make it part of their camouflage.

16 archers and 8 light spearmen give me a second unit of light missile with sharpshooter upgrade and a unit of light foot with missiles. So now the smaller Ral Partha "Scottish archer running" who have been fleshing out my elvish firepower can return to the armies of the Northern Kingdom. Or I can field a really big, very shooty army with three units of elite bow. 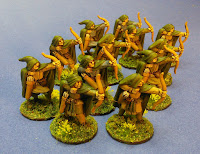 For the light foot I used a grey blue and ochre to do a low visibility version of the blue and yellow shields carried by the armoured spearmen.

I finished the bases with the new excellent flower tufts from Shadow's Edge.
Posted by James at 6:45 PM