The Mad Padre and I have been trying to book another gaming playdate ("Operation Thundering Dice 2017") all year. But other things have taken priority. This past Friday a worn Mad Padre arrived at the Townhouse of Solitude for some much needed geek therapy.  He'd brought his Lord of the Rings kit, so a big game of Dragon Rampant was set up before we went to bed.
The objective was to control the ruined town in the middle of the table. High roll got to pick a table edge and deploy second.
I sorted out a 99 point army for the Witch-King. Mike was able to field an alliance of Elves and Men by borrowing from my Elves. The army of Angmar was divided into four commands, with the dragon being a separate 20 point command on his own. On the Facebook Dragon Rampant forum there has been some discussion of "epic warbeasts"; head and body are each one greater warbeast (head has flame and cunning, body has flight and cause fear). So lots of hit points, but if either portion is killed or routed the whole beast is killed or routed.
Saturday morning, after some bacon and eggs and lots of tea, we went downstairs in our pyjamas to start rolling dice. 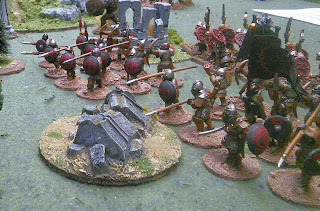 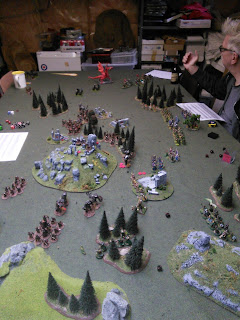 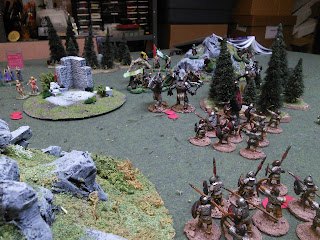 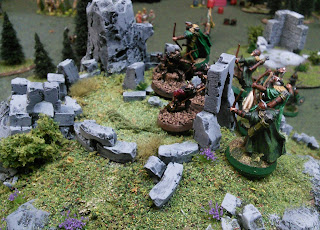 I was going to write a clever story in the dragon's satiric voice, but it's been a week of heavy overtime before the Christmas break, so my muse is tired.