Fighting Around a Siege

I finally got to try an idea I've had to play multiple scenarios simultaneously all involving operations around the siege of a small castle.
Face it; every medieval wargamer worth his or her dice wants a castle and naturally one wants to lay siege to it.
But sieges are really boring. They're an exercise in engineering, supply management and not getting cholera. 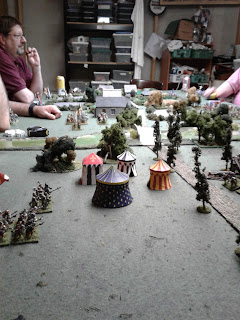 However, with the scenarios in Lion Rampant I thought many of them could take place around a besieged castle.
I had 5 friends coming over so I split my table in three. At one end the garrison of a castle was making a sortie to destroy the bombard ("Defend the Indefensible"). 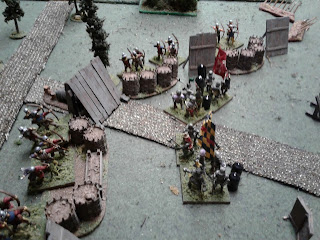 In the middle a column of supplies for the besieging force was being intercepted by a relief force ("The Convoy"). 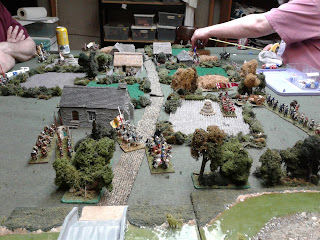 At the other end a foraging column was looting a village and being stopped by another relief force ("Sausages and Mustard"). 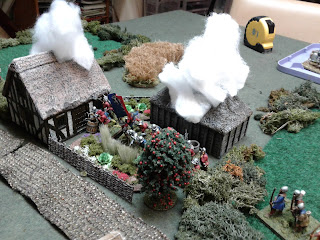 I had all the French retinue activate simultaneously and then all the English to keep it moving and to allow retinues to influence the battles going on beside them. I found it worked pretty good and would make for a different multi-player or convention game from the usual battle. 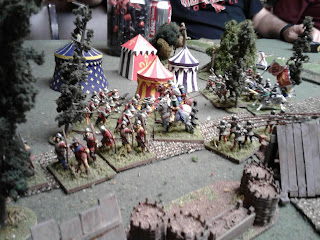 The Sortie, after some initial reverses, stormed my siege lines (I must have run out of arrows since my longbowmen failed to shoot) and destroyed the bombard. Then assisted by some cavalry from over the river they also overran my camp. The supply convoy got beaten up and lost a wagon. The foragers did best, defeating the French in front of them and looting half the village. 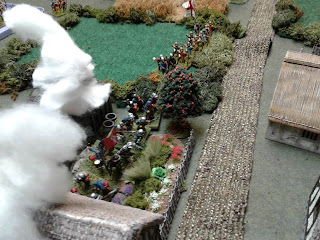 While packing up I took the opportunity to give my old friends a bit of TLC (a crossbowman needed reattaching at the ankles and so many broken lances needed reattaching!) and a reorg. I'd previously had them boxed by nationality, but decided that it was much easier to group them by troop type. Hopefully, this will make setting up a game a bit easier in future.
Posted by James at 10:15 AM