I have finished the additions to my Martian Marines. The command pack features some fellows with monoculars and a tablet type control pad, plus this alarmed looking fellow holding his helmet. I just find him amusing and characterful, which is pretty good for someone in a full helmet. The monocular users will either be in the HQ teams or assigned as spotters for the snipers and missile launchers.


For heavy support I also got some missile bots to supplement the gun bots. I figure these will be used for defensive missions rather being dropped from a ship.

Then there is some shoulder launched missile support too, for drop insertions.

The pack of 4 missile launchers also included 4 snipers. I thought about putting these guys in some dark grey camo, but decided against. With sensors etc. they could just as well be in bright pink so long as they aren't radiating any energy signal.

I also added four more 3 man fireteams to make two platoons of 6 fire teams plus HQ and weapons teams each. I have 4 left over SAW/LMG types who I will probably assign to the sniper and missile teams as close protection. 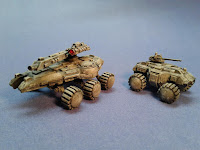 So that's it for space marine types. Now it's just angry colonist/pirate/smuggler types for unsuited mayhem inside the tunnels of an asteroid/moon colony or on a distant world through the ring gates.
Posted by James at 6:47 PM