My day of cadet training on Saturday was cancelled by the Reserve unit who's Armoury we use, so I was available for a road trip with Mike and Dick to take in the last Broadsword event of the year. These game days are put on 3 or 4 times a year by the Hamilton Table Top Gaming Society as a fund raiser for the Hamilton Legion Branch who let them use the hall for their weekly meetings. So a very symbiotic, and I hope mutually advantageous, arrangement.

It's a very old school, local game convention, held in a down at it's heels Legion hall. A bunch of tables with some nice games. Some folks playing board games. A couple of dealers. Cheap admission. Really, it's the most fun you can have for $10.

I talked my fellow travellers into leaving early so we could play in the morning too and after braving the near freezing rain, the highway, a traffic jam on the parkway and then taking the switch back road down the face of Hamilton Mountain we made it, only 5 minutes late and the three of us sat in on a super cool and amazingly pretty 6mm 1:1 scale American War of Independence game. Figure scale matched ground scale and three stands of 16 figures equaled a company.

The rules were equally innovative. Much fun was had but it was interesting trying to get used to the long musketry ranges, although long range volleying didn't do much to each other. But my partner took our half battalion of British line and engaged in long range volleying to tie down the 2 battalions of Continental line whilst I took my Loyalist troops to march across their front, cross the ford and join our allied Natives in burning the town and tearing up the Rebel militia.

After lunch I kept to the 6mm theme and played in my friend Brian's Franco Prussian War game. This time he staged the Battle of Spichern, using Bloody Big Battles. I took the French this time, having played the Prussians last time (which was I think 2 years ago). It was brutal. The Prussians got within range quickly, negating the advantage of our rifles and thrashed us badly. I was in a strong position flanking the main Prussian thrust down the valley, but I promptly ran out of ammunition and got swamped by 3 large Prussian brigades, so the Prussians grabbed 4 of the 5 objective markers in one bloody turn! C'est le Guerre! 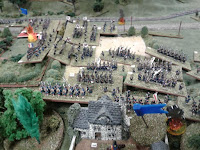 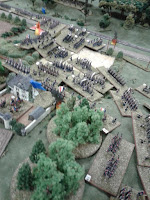 There were lots of other good looking games too, but since I was busy playing I only got a few snap shots of the many well presented games. 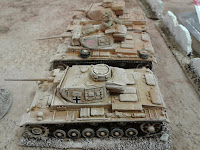 Al in all a good day out and it was nice to get some gaming in. The basement has seen much action lately. But I'm trying to finish up some elves and then I'll set up some solo action if no one is available.