Been plugging away at a few things in my off time. Work has picked up and all the fall chores like cleaning up the garage naturally press upon me.

Also Cadets has started up, but Covid and Social Distancing has complicated that, so there's Zoom meetings and virtual lessons on Google Classroom and training schedules put in disarray to take me away from painting.

But I have been bashing away at the Norman cavalry renovation and am within a pip of finishing them! At least the painting. Then all 72 need to be based or rebased. Plus the infantry. Then they can go loot the village and set fire to the church, or something. 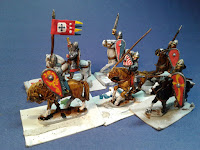 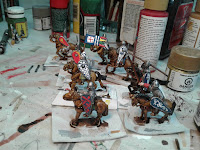 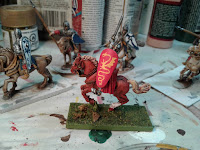 I have also been cleaning up and priming my 1/600 scale aircraft and trying to research IJN aviation  colour schemes. It seems the Japanese weren't very precise in their colour regulations. Of course very few examples survived the war so it's hard to tell. Plus sitting on the flight deck of an aircraft carrier exposed to sun and salt water weathers the paint considerably.

And just to keep another plate spinning I've read two books on Afghanistan: 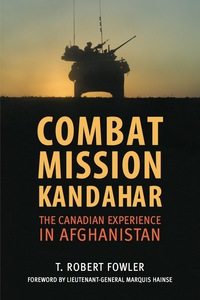 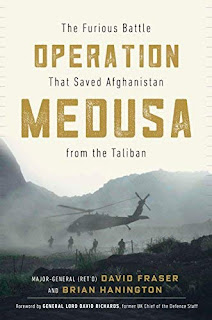 Operation Medusa was a good strategic overview. Fraser was certainly highly complimenatry of everyone he worked with during the lead up to and execution of the battle, from allied commanders down to the squaddies in his Close Protection Detail. The chapter headings featured a lot of quotes from "Mother" his Brigade HQ Sergeant who was in Tactical command of his Tac HQ when it rolled out several times a week. More detail about the tactical aspects of C Company's ambush or B Company's push in from the north would have been welcome, but I suppose that is out of the scope of the book. General Fraser's worry about losing access to all the allied air assets before he could conclude the battle and destroy the Taliban shaped some key decisions. He does also point out that TF31s actions on the southern flank as detailed in Lions of Kandahar were pretty key in winning the battle. Still an interesting read.

Combat Mission Kandahar was also interesting for the soldier's eye view gritty detail. There is information on a few engagements. The chapter covering the Recce Squadron for instance told me that minimum patrol size was 3 vehicles and the sensor operators provided the dismounts as required. I had a third Coyote in the lead pile. A metal and resin kit from S&S Models which I had vague plans to add a sensor mast to, but I decided to just paint it up. A couple of large scale ambushes were also detailed, including one on a large vehicle convoy, and another featuring Canadian advisors and an ANA company. Both  could make for an interesting solo game at least.