Bowties, Crud and a Parade

This past weekend was sort of my final weekend for my BOTC. We had our small party tasking exercise, our Mess Dinner and our Graduation Parade, so I'm done the course.

But I have to go back up in two weeks for a First Aid Course.

It was a fun weekend. Friday nights after checking in and unpacking, we would go to the Officer's Mess for a social drink and catch up. This weekend Jay announced he had brought some Chocolate Vodka for us all to try. Intrigued (well some were just attracted by the smell of booze), 16 of  us squeezed into his room to have an impromptu University Dorm party. When I walked back to my room from the Mess later on I realized it was a Good Thing I didn't have to drive. It made for a less than restful night. The instructors were very concerned about our long faces the next morning during the Small Party Taskings Ex. and turned it into a Teachable Moment.

I canvassed my course mates and one of them shared some snaps he took with his iPhone (when he wasn't playing the assorted apps that is).

Here we are having a break during practice for our Graduation Parade. That's me third from the left. The fellow doing the Vulcan gesture was my room mate. He's wearing his NCDs (Naval Combat Dress; the standard workday clothes for the RCN). The people in blue berets and combats are Air element officers. The more formal looking woman checking her phone is another Naval Cadet in her Class 3 DEUs because she never got her NCDs from her home Support Unit in time. 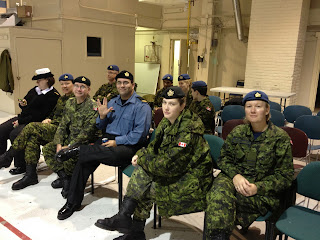 The gentleman in the middle is one of our drill instructors, a semi-retired Royal Canadian Regiment MWO who mentioned doing jump training in '72 and when he arrived for our Grad Parade he was sporting a chest full of service medals and the French Commando school badge. 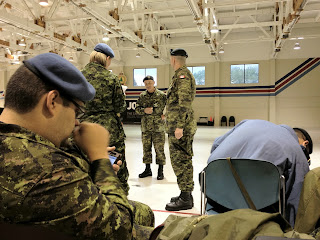 I found myself repeating many of his helpful tips for the improvement of our personal drill to the cadets last night.

That night we experienced (for most of us) our first Mess Dinner. Here are most of the ladies on the course posing with our Guest of Honour and new Boss, LCol McMillan, Commanding Officer, Central Region, Canadian Cadet Organization. He previously spent 30 years in the RCAF on AWACS aircraft and posted to NORAD Commands. 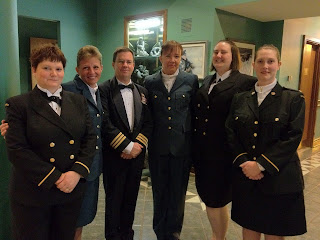 The LCol is wearing proper mess kit for an RCAF officer. The rest of us junior officers have to make do with our Class 1 tunics, a white shirt and bow tie. The ladies are required to get a special blouse (different depending on branch of service) and pumps.

A couple of my Air colleagues. Nicole and Pablo. He must be crouching down, because he's pretty tall and she is not even in the four inch heels. But she is a very capable young lady who reminds me a lot of my oldest daughter (they're the same age, height, and she made a smile at the dinner that made me flash on my girl). Notice that Pablo is wearing his pilot's wings. 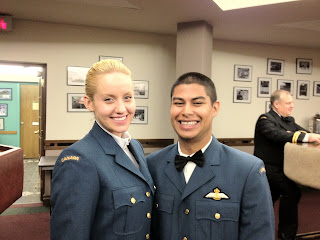 More of my colleagues in the bar of the Waterloo Officer's Mess. The young man on the right was our Parade Commander. We were seated together at dinner. He made me feel a bit old by remarking that I had been married longer than he had been alive. Yup he's only a year older than my oldest girl. 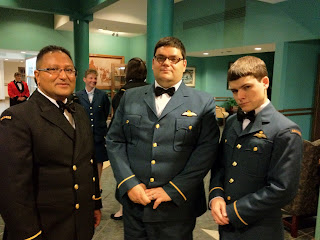 After a bit of polite chitchat in the lounge the LCol asked if the Mess had a pool table and did anyone know how to play Crud? So the party moved over to the informal side of the bar, referred to in Messes world wide as The Snake Pit. 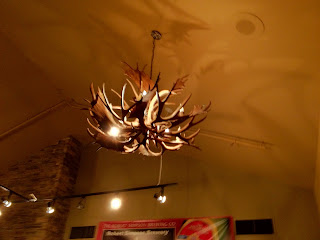 It's decor is more relaxed and it contains the big screen TVs (one tuned to sports and the other to music videos), comfy sofas, jukebox, Foosball, shuffleboard and a couple of pool tables. And the hi jinx began: 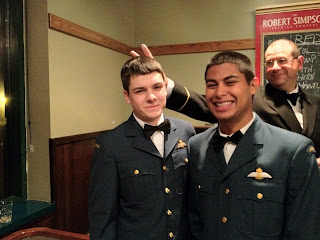 The LCol was a pretty enthusiastic Crud player. Crud is a game that uses a pool table and two balls. You roll the cue ball to hit the coloured ball (you get three tries). Once the ball is struck, the person on the other team then has to crab the cue ball and hit the coloured ball again before it stops moving or goes into a pocket. You can only shoot from the short sides of the table (I kept going off side in my excitement). If you fail in the above you get a strike against you. Three strikes and you're eliminated. Play continues until all of one team is eliminated.

Needless to say after a few drinks it gets very lively. There are variations, such as Contact Crud in which you can check players as they try to get the ball.

So we stayed up too late. I started drinking water once the Port for the toasts was done, since I get horrendous hangovers. But I was still very glad the Sergeant-Major let us sleep in an extra hour the next morning. When we practiced our Graduation Parade that morning, the CSM was so pleased he let us break early to have lunch, get changed and clear our rooms.

Then after lunch we had our Exit Interviews and Debriefings (I did well btw) and then the Grad Parade. Of course there was posing for pictures: 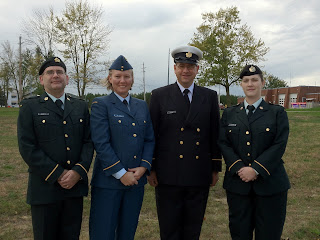 Me on the left, Mariska in RCAF blue, Jay looking sharp in his RCN uniform and Shauna. Shauna was our Parade 2i/c. I tended to hitch a ride with Jay a lot. Our quarters were a 5 minute drive from the School and I didn't feel comfortable finding my way around the base until this last weekend. 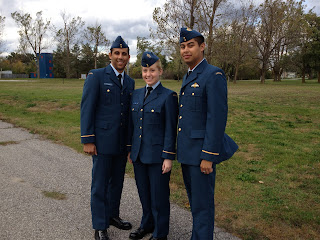 Taronish, Nicole and Pablo all looking sharp too.

I've really enjoyed these weekends, in spite of the stress of giving up my days off for the last two months. I tend to come home pretty happy and energized. I'm going to miss it I think. But I've already signed up for my next course and hopefully I'll keep bumping into these people over the years as we move through our CIC careers.
Posted by James at 9:09 AM