Last night the Mad Padre came over to paint, help finish up some of the beer he's left in my fridge and provide some fraternal support.

When he arrived he gave me a bag of goodies; a partial bottle of Woodland Scenics Water Effect to finish my Afghan irrigation ditches, a used copy of Rapid Fire! (I'm hoping this might be faster and easier to play for Wierdy-Beardy), a volume of P.G. Wodehouse short stories and this: 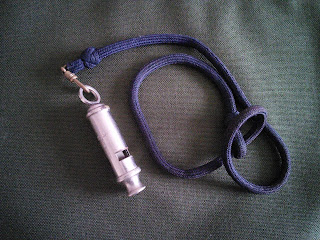 It's the signalling whistle his father carried as a young subaltern in WW2 and Korea. I mentioned the Padre's Dad once before.

He had heard me mention earlier that I had been thinking of getting one from the local Scouting Shop to signal my cadets on FTXs (much easier to get their attention across a bivouac site or extended training area than yelling), but spending $8 on a whistle when newly unemployed seemed a tad extravagant. He said "Oh, I've got one. You can use it."

I was quite touched to be handed such a personal memento."It was just sitting in the bottom of a drawer. I think Dad would be happy it's being used with your cadets." I just wonder if Lt. Peterson was carrying this whistle when he lead his platoon on the raid in Korea than garnered him the MC?
Posted by James at 9:06 AM