I think it is a universal truth that every medieval wargamer wants a castle. They are so iconic of the era and strategically important. Many of the battles had a castle involved somewhere.
Of course most of our table top castles are inspired by the great fortresses that still survive.

Huge structures with layer upon layer of towering crenellated walls and massive drum towers giving interlocking fields of fire making them all so strong that many were never successfully assaulted. The models of them are suitably enormous and take up most of the table space.
Mikey has been working on a card model of Bodiam Castle for decades. The floors in each tower will be accessible and the portcullis will work. I think he has one wall done.
But the footprint is enormous.
Which is OK for a 1:1 skirmish or RPG. But for most rules, an archer couldn't shoot from one end of the castle to the other the model is so huge.
For most of our games we need something smaller which can be held by a few dozen figures while the rest of the player's army marches to their relief.
A small country castle held by a small baron which would actually be worried by a column on chavauchee burning it's way around the countryside.
Something that can sit in a corner and not take up too much table space while the sortie or raid or relieving army lifting the siege occupies most of the action.
All these thoughts got me thinking of playing some Lion Rampant this weekend. Have the garrison of a castle sortieing to raid the siege lines, meanwhile part of a relief force is raiding a supply convoy heading for the besieger's camp.
Now this brings me to my castle, which has been sitting in it's box for a couple of decades. I think I made the gate house and open topped tower over thirty years ago after Mrs. Rabbitman bought me my first lead medieval figures for Christmas. 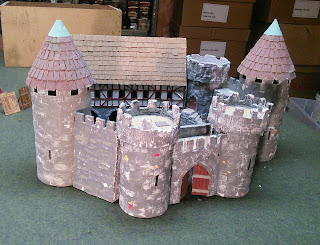 The towers on the gate house are made from scrubbing powder bottles (you can see the yellow labels appearing in the chipped plaster). Sections of styrofoam for the crenellations. The walls are made from chunks of styrofoam with corrugated card wall stuck to the outside. The drum towers were made from cocoa tins. Everything got a goodly coat of plaster of paris and grey paint. 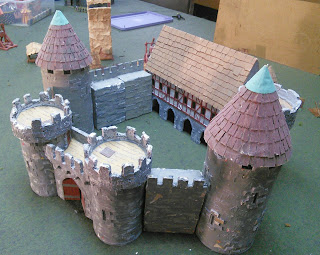 I did at least have the idea to make everything modular. But I didn't really plan out the modules or how they would fit together, so it makes for some odd layouts, and you have to imagine doors at the towers. And there is only the one set of stairs.

I'm still pleased by the Great Hall though. I think the turrets came out nicely.


I also made siege engines naturally. The siege tower is actually my second one. Mrs. Rabbitman had some left over leather from teddy bear paws and donated it to the cause. I think it's quite effective for the wet hides. It is however a shame I didn't think to measure the height of the bloody walls!

I remember knocking these trebuchets together when Daughter Number 1 was a baby, inspired by the elastic band powered catapults my dad made for me which fired balls of cigarette foil at my Airfix figures.
I have at least assembled a collection of resin, metal and hand made with coffee stirrers mantlets, which will look better after a redo on the paint I think. Plus a trio of bombards, which not being suitable for field battles haven't been out of the box for decades either. 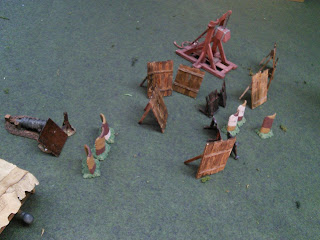 When Daughter Number 1 got bigger she wanted to have her own castle to house her small band of dwarf warriors, so we built this one together. 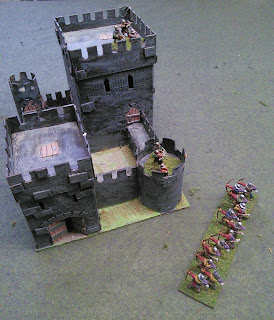 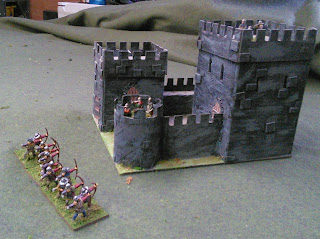 This I think, is more of the size I am really aiming for. And maybe I shouldn't bother with it being modular either. Just a nice piece that can be garrisoned by a couple of units.

Or this fortified abbey from Saxon Dog's blog: Making the castle as a set piece, perhaps scaled to fit in a box to keep the dust off, I could incorporate a rocky outcrop to put the keep on and a moat in front of the bailey.
So more to ponder.
Obviously my current castle and siege equipment are not quite the thing and in need of an upgrade. So I should keep an eye out for opportunities for siege engines, entrenchments etc. and start brainstorming the layout of a small castle.
More to add to the project list it seems.
Posted by James at 9:21 AM