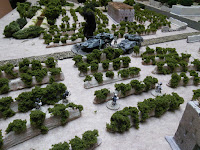 The objective for this game was to try scenario ideas created by my new Taurus ARV and the wrecked LAV  I made early on in the project.

A patrol of Coyote  Recce vehicles has been ambushed  and is pinned down in dense terrain, so a dust off can't get close enough to extract the wounded crew.

Overview of the table: 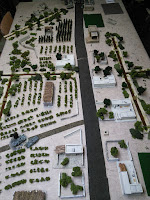 The QRF enters on the paved road at the  top by the ANA checkpoint. The patrol is pinned down in the grape fields at lower left.

The QRF rolls out. Platoon of infantry in LAVs , lead by a Leopard  2, accompanied by a Bison ambulance and the Taurus ARV. The ANA  with their technical and BTR60 give moral support.

Soon an American  Apache is over the patrol putting down  some covering fire. 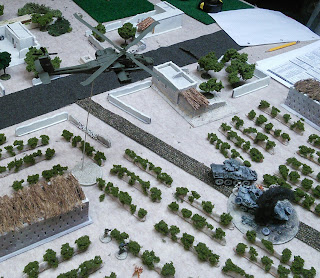 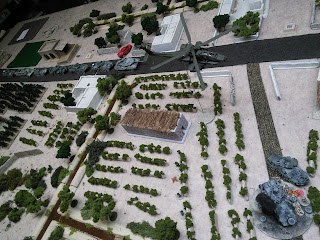 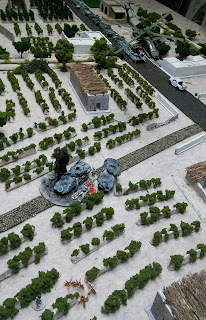 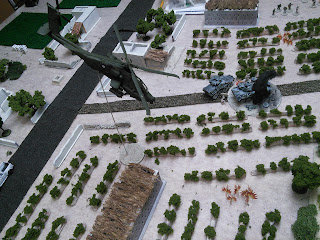 Shortly after this , my never before used Taliban  SA7 team fires at the Apache, damaging it and driving the air cover away.

Ambushed! Taliban recoilless rifle in an orchard brews up CS 21A. 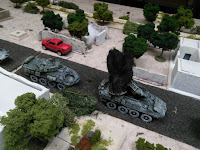 The troops stumble out with wounds and suppression on them. 21B lays a lot of 25mm fire into the orchard. 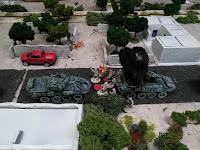 But wait! There's more! A suicide bomber hiding at the end of the culvert jumps up to explode in the midst of the still stunned troops, killing another and wounding more. Plus two more Taliban teams open up from roof tops knocking out the Bison and wounding all of the medical techs. 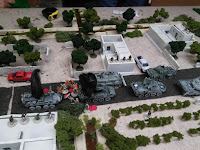 The Leopard quickly puts 3 activations of 120mm HE into each offending house. 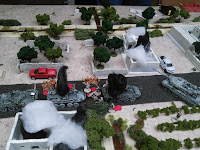 CS 21 and 21B along with the Taurus pushed onto the patrol, who had taken a further casualty but a lot of the pressure had slackened thanks to the Apache . 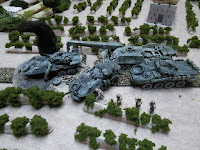 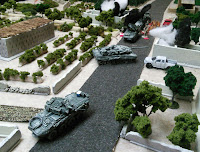 After dealing with Taliban  in the pot and grape fields, CS 21C backs up to cover the rear and start loading casualties. Good thing too since a 12.7mm MG opened up from the roof of the market. But like all Taliban heavy weapons it got one round of shooting off and then died in a hail of 25mm cannon shells. 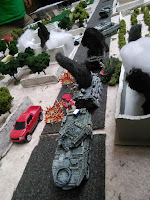 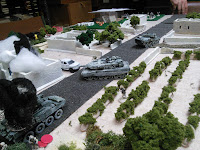 The Taliban still had a few teams and another suicide bomber unrevealed, but it was getting late and it was already a major Taliban victory with two additional vehicles knocked out and 4 Canadian KIAs.

Also by this time we figured anything that could fly was probably inbound to rescue the convoy so the wise Taliban commander would get out while he could. The number of martyrs was big enough.

The boys had fun, I got lots of toys on the table. Rules for air assets and calling artillery are still an issue. The activation sequence I'm using is still rough too. Maybe something more like Bolt  Action with a card or chip for each element?