Last November Ravenstar Studios had a massive 40% off sale. So that made a few decisions for me and I put in a pretty big order. More than I was initially thinking at any rate, because you know more ships equals more scenario options, right? RIGHT?

Now for the waiting. They'll show up in time for Mrs. Rabbitman to give them to me at Christmas and I can paint them up on my holiday.

I got my old copy of Full Thrust out to review and wait some more while pondering vector movement, rail guns and missiles to fit with The Expanse.

After 8 weeks I contact him. Having grown up in the 70s with "please allow 6-8 weeks for delivery" and figuring with a 40% off sale he had been slammed with orders and was busy casting up tiny ships I was trying to be patient. But he figures it should've arrived early December and has gone astray in hyperspace.

He re-sends the order.

A third box with some other ships sent out as a peace offering also goes missing in hyperspace.

So finally after 6 months I ask him for a refund. He sends me the refund and unbeknownst to me, a fourth box, which popped into my mail box within 5 days of shipping. Irony, being the most common element in the Universe, both arrived on the same day. 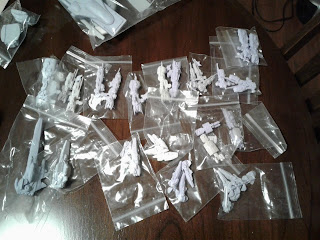 So I now have a pretty big task force of the very interesting Daisho Confederation ships and a smaller group of the sleek Mauridian ships plus a few transports and a honking big 15mm VTOL and a pair of cute little hover cars for my colony.

Now I've got to figure out how to base them and get painting!