Pushed a few limits with the Air Cadets this weekend and did a few things that the previous management never let them do. 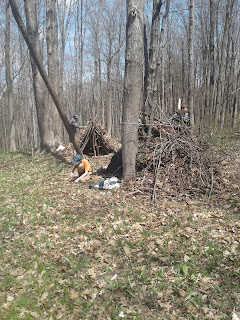 First, under my DCOs direction, the Senior Cadets planned and directed an entire FTX weekend. The main objective, weather permitting, was for all of the cadets (not just the seniors) to make and sleep in improvised shelters. They haven't done that before. Then, again weather permitting, they were going to launch some rockets they had worked on earlier in the year. Again, the risk adverse previous management never allowed that either. Or camp fires. Or fun... I also let my Level 3 cadets and up carry knives (as long as the blades aren't more than 10-12 cm). 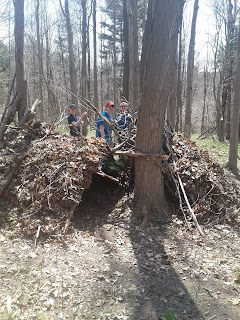 Our chosen weekend conflicted with a major Regional activity that we weren't attending, so drawing equipment from stores wasn't going to happen. With some last minute negotiation we got the rations and transportation authorized though. Then a severe wind storm tore across the province on Friday, knocking down trees, uprooting light poles and generally causing power blackouts all over. 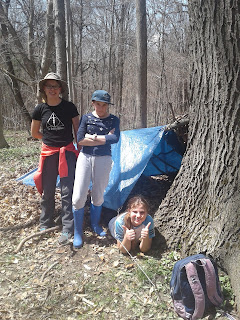 Fortunately the wind abated before I was trying to marshall cadets outside to get them on a bus and off we went. No power at the camp site, but we had new butane stoves and running water so it was worth a try. It was, after all, a survival exercise. 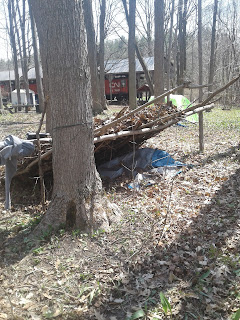 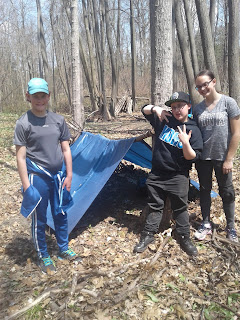 Saturday was gorgeous and the cadets did a brilliant job making some improvised shelters using fallen limbs and tarps while cooking their own MREs (Meals Ready to Eat, or Meals Rejected by Everyone). The senior cadets made things happen with limited direction. My DCO and mine's objective of sitting by the fire in our camp chairs (while monitoring safety naturally) was also achieved.

The power was still out by night fall so a campfire was the only entertainment. Plus the DCOs iPhone and Blutooth speaker. So they roasted hot dogs, marshmallows and sang along to her musical selections. I was surprised (and pleased) at how much 80s and 90s pop they requested. But the charge on the speaker died at bedtime so off they went. Camp fire Karaoke will be a recurring evening activity. 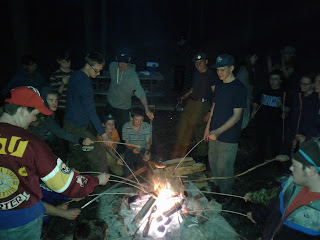 They were all safely tucked up in their lean-tos and bivvies, when some rain swept through. Just enough to test their handiwork, but not enough to test them to destruction. So everyone was dry in the morning. During breakfast I got to hear an enthusiastic but fairly off key rendition of Bohemian Rhapsody.

Since we barely used the cabins and meal hall, clean up and packing was a breeze and we could spend an hour Sunday morning launching rockets. The Senior Cadets had a brilliant idea to order in pizza at lunch, which I gladly agreed to. Usually lunch on the last day of an FTX is a pain. Everyone is sick of MREs, plus you've been trying to clean up and pack away the gear, yet you have to leave the cooking gear until last and MREs make an amazing amount of garbage. So you've got THAT to clean up from just before the bus arrives. Pizza comes in handy burnable boxes and can be served on napkins. So it's just clean up the fire pit before you go. Brilliant. 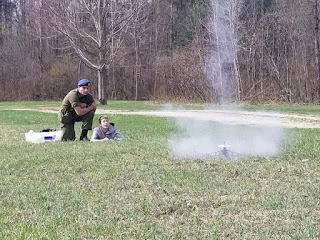 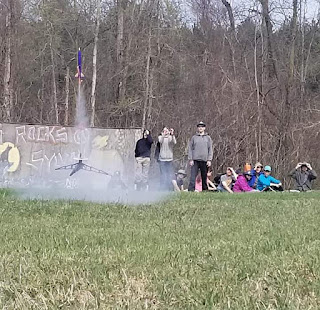 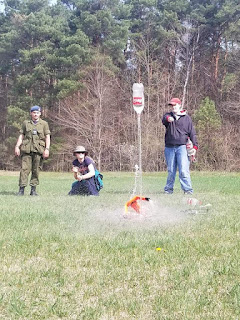 Shelters made and slept in. Camp fire enjoyed. Rockets launched. Cadets had fun and wanted more exercises like this. So it was a shiny weekend all around.
Posted by James at 6:39 PM