Couple of Games Catch Up

A quick catch up and summary of a few games featuring friend's collections. Click on pictures to embiggen.

A few weeks ago, Patrick was finally ready to unveil his Gangs of Rome (In 1/72nd scale) project, which he's been working on for two years.

Being a far bigger Roman and ancient history buff than I, he totally geeked out building the terrain  and his attention to details are incredible. Much use was made of Google image search and colour printing for the mosaics and frescoes on floors and walls. 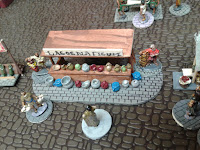 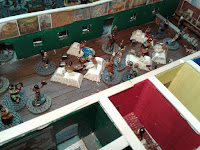 My gang of 3 figures was to attack the bakery owned by my patron's political rival. I don't think 1 fellow getting through to stuff his tunic full of bread rolls and then run away was much of a victory to be honest.

The big round bases of figures are 'crowds'. You can move into a crowd, disappear and redeploy from another crowd. But if you do any violent act near a crowd they will react randomly. They might stand and watch, move away, join in, or attack you. I took more damage from the crowds then from my opponent!

But quite the elaborate set up with a cast of 100s of extras for 6-12 figures to play in. Patrick bought a lot of Strelets figures!

Last night, Scott brought a few of his simply massive Napoleonic collection over to play a learning game of General d'Armee. 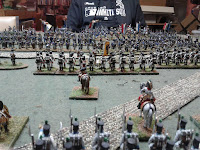 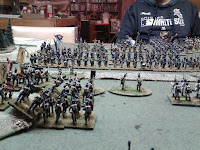 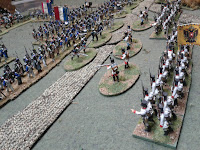 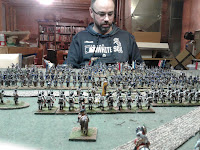 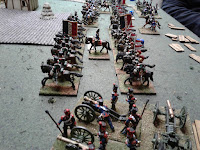 Scott is a very good player with a sound eye for the tactical situation. Last night I think he was hit by the new figure curse. Hesitant brigades, artillery low on ammo, bad ADC rolls, rolling 3 when firing on my cavalry charge.... really quite appalling. So I can't claim victory due to any tactical brilliance. But we did get to work through a couple of charges. I'm not sure why rules need to make charges so complicated.

Scott's big 24 figure battalions take some getting used too. They take up a lot of real estate  and I was having trouble managing traffic jams and fields of fire. I never did fire my artillery!