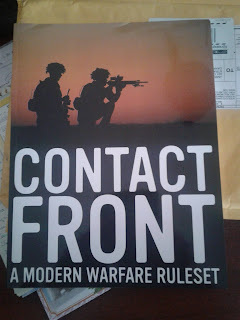 I consoled myself after a stressful Friday and Saturday cancelling Hot Lead by having a solo game of Contact Front from God's Eye Games on Sunday. I've adopted from the Mad Padre the eminently sensible idea to solo play to learn new rules. It also means I get some gaming in. Especially at this time.

Force selection is interesting. You begin with a basic platoon or insurgent cell, then roll a d10 for support points. Choice of mission will give you some extra points too. A die roll determines who chooses their mission first, which limits the mission selection for the other player. The Taliban won the roll and took "Dominate the Ground" with +1 point. The Canadians then took "Advance to Contact" with +2 points. The Canadian die came up 10 and the Taliban die came up 6. 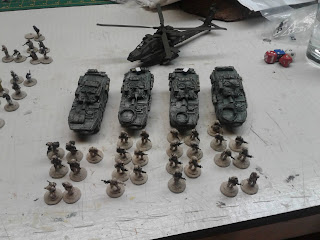 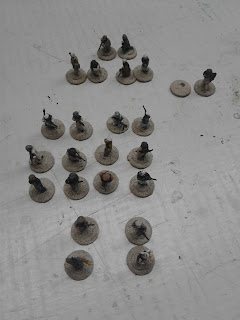 I'm using a mash-up of the free to download Danish and Australian army lists to get a start until I write one for the Canadians.  My 12 support points got me a platoons worth of LAV IIIs, an Apache attack helicopter, and some 81mm mortars on call at the FOB. The Taliban got an IED, a suicide bomber, a sniper team, a 2nd RPG team and a 2nd PKM LMG team. I find it odd that RPG teams are not a support option in the book, but I'm a rebel. I have loads of RPGs and the Canadians faced a lot of them. So I let them take one more.

The players then select their Victory Points. I had the Canadians searching for weapons caches, so three were spread across the table, 1 in each third. The Taliban wanted to slay the enemy and deployed their IED  in the middle third of the table.


The Canadians got 10 VPs for 2x weapons caches eliminated. 4x KIA is -8 VP, but retrieving the bodies reduces it to -4. So net 6 VPs.Taliban got 10 for killing enemies.

The restricted Rules of Engagement really help. The insurgent can maneuver his teams into position and develop his plan and gets to choose when to start the battle, unless he miscalculates and gets too close, then the Western player can make a Search roll.

The generation of Activation Points helps with the friction too. The requirement to spend APs rallying pinned teams and securing casualties means the Western player can't do everything he wants to do either, keeping it from becoming a game of whack-a-mole.

So far I'm quite pleased with the rules and look forward to having Call Sign 21 out some more. The author is working on an Afghanistan supplement and rules for Special Forces. So both of those are on my radar now too.
Posted by James at 1:17 PM