Gaming During a State of Emergency

Social Distancing has certainly put a crimp on gaming. I've seen refernces to "Hot Lead Hiatus," "Not Lead" and "Hot Lead Instead" as people search for other ways to get their hobby on during the pandemic.

Saturday morning over breakfast, Mrs. Rabbitman suggested that using the video chat feature on Facebook Messenger would be a good way to play with some one. She uses it to talk to Daughter No. 1 in Alberta weekly and finds it easier and more reliable than Skype. To demonstrate she quickly set up a 4 way call between our daughters and us (although my grandson, being 3, did most of the talking!).

I still had my Afghanistan stuff out and wanted another bash at Contact Front from God's Eye Games. Pete (who lives about an hour away anyway) was quick to respond. So with him on a tablet at his painting desk (he painted while giving me instructions on how to move his figures and rolling dice) and me on my phone in the basement, I walked him through mission, objective and support option selection. I gave him the Canadians being more straightforward and he rolled a 9. So he took the platoon LAVs, an Apache attack helicopter and with the 2 pts for doing an "Advance to Contact" he took a Fireteam of ANA. I rolled a whopping 2 and took "Dominate the Ground". I picked a sniper team and extra RPG team.

As my phone was busy showing Pete what was going on I didn't get a  turn by turn photo record. I snapped the following during a hiatus caused by his battery running down. But once comms were reestablished we were able to play to a finish. 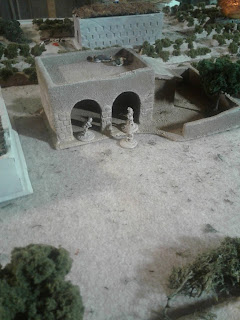 Pete pushed up on his right to capture and hold the grape hut, getting to it first with a full section. I did all of my fighting with the RPG and sniper teams, who all died after scoring some kills on the infidel. Having made my VPs by brewing up the LAV and killing some Coalition troops I decided it was the smart thing to withdraw into the pot field.

Plus my phone was on low battery.

We both secured our objectives, but the Canadian casualties resulted in a 5-3 victory for the Taliban.

Interesting experience. I'll do it again, but maybe with rules everyone is familiar with like Dragon/Lion Rampant. Although Pete found the extra fog of war provided by the interface of viewing the table through my phone camera interesting. More than four players might get a bit messy however as we all miss the usual social conversational queues and talk over top of each other. Pete and I had a few isssues with that.

Now that the Provincial government has ordered the closing of all non-essential businesses, I suspect I may have more time over the next few weeks. I wonder if saw blades are essential?
Posted by James at 12:29 PM