Big Gun for the Tsar

What is a Russian army without artillery, and large caliber artillery at that? 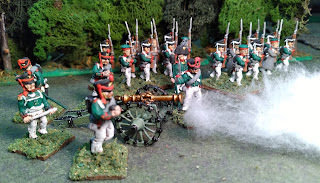 My big bag of second hand Russians included 6 artillerymen (2 each of 3 poses). So I used 4 of them plus one of the superfluous officers to make a gun crew of 5. Sharp Practice has artillery crews set at 5 figures, so I bunged in the second ammo carrier. 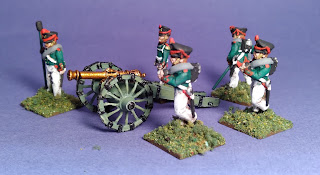 During a weekend long web conference I got them scraped, glued, primed and under coated. This was something easy enough, and not overly mentally taxing, so I could amuse myself and still pay attention to the PowerPoint slides and presenters, but still simple enough that I could put things down quickly to make notes. 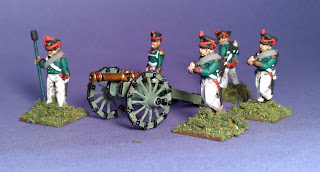 I also painted the gun, which I got in a trade already assembled and primed from Mikey. The barrel was painted in Vallejo "Bright Bronze" with a sepia ink wash. For the "apple green" carriage I used Tamiya airbrush paint "IDF/IAF Green" and then some craft paints celery green. Iron fittings were done with black ink.
I then got them painted up over a couple of sessions this week. 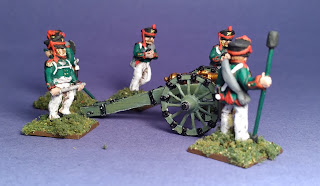 I know, I said I wasn't going to get in a sweat over uniform details and I thought I'd just do the collars and cuffs black, but Russian artillery uniforms have all this really distinctive red piping. It was only 5 figures and I was feeling brave, so I did it.