I have completed the last of my Hät Bavarians which gave me 6 battalions of line infantry and a battalion of lights, plus extra Big Men.

This completes all of my Bavarians so far. If I use 4 stands of Scharf's Schützen to make another light battalion I can field 2 understrength brigades, 4 batteries of artillery and a weak, 1 regiment brigade of cavalry. 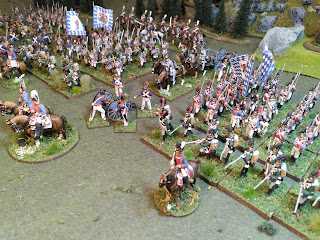 I think I have enough to run some learning games of General d'Armee. Although my Bavarians actually outnumber the Russians.

I have agonized over expanding the cavalry, but the superb Bavarian cavalry brigades never marched with their parent corps in 1812, having been detached by Napoleon to join the main army and then be wasted at Borodino. So there weren't very many of them for 1813 or even 1814. I am still pondering getting some dragoons for 1809 games against Scott's Austrians, but for 1812 and later they would be more likely to have French cavalry in support.

Because I am lazy and I was focused on the smaller scale Sharp Practice, I did everyone with the red facings that the majority of Bavarian infantry used. Now that I have more than enough for even big games of Sharp Practice, any expansions will fix that and use other facing colours.


Of course I have 2 more battalions to complete the brigades, a limber and a caisson on order from the Perry's. I'm going to get them a supply wagon (or two?) from Warbases too.

But I'll hold off getting a third brigade until after I do some Prussians. Irony being a cosmic constant, Victrix have just announced their set of Bavarians, of course. It has some interesting options. But I'd need one and a half boxes to get that third brigade, or just maybe just buy three boxes of Hät for less money and assembly headaches. That however, is a decision for another day. In the meantime, a toast to my new army!