Knocking a few random 15mm WW2 pieces off the lead pile this week.

A friend gave me this 3D printed Archer SP AT gun a few years back when 3D printing was still pretty new and exciting. The detail and resolution aren't great. There are horizontal lines from the resin layering. But it was free. 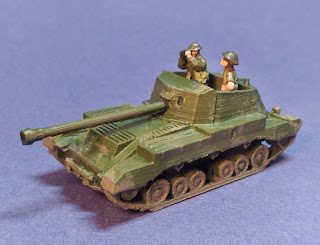 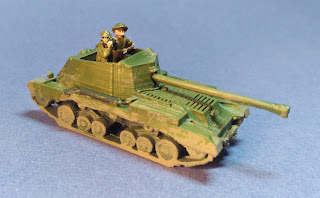 It mostly sat because of the empty fighting compartment and needing to find suitable figures. Discovering that the crews wore tin hats was a big help. Also finding out that some Canadian SP AT regiments used Archers also helped motivate me to finally get it done. A couple of shades of green and then some dirt and that'll do.

Archer and 25 Pounder crew were painted with Tamiya Kahki over a brown undercoat. Tamiya tan for the webbing. Olive green helmets.

The 25 Pounders are a gift from the Mad Padre, who bought some for his Operation Husky O Group project. The models are from Forged in Battle. The nice thing about O Group is it gives one an excuse to have medium or heavy artillery models in the collection. Up until now, my artillery has always been represented by a FOO with the guns off table. 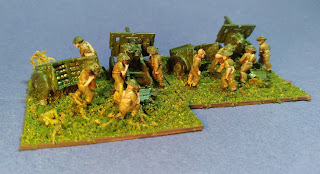 I've always liked the 25 Pounder. It was such an iconic, workhorse artillery piece. Read The Guns of Normandy if you'd like a very good front line view of life in a 25 Pounder Regiment during the Normandy campaign.