Getting conjunctivitis as part of my Covid symptoms over the holidays has thrown a spanner into painting plans. Fortunately these buildings from Warbases are simple enough that I didn't have to focus too much and even did some of the work one-eyed!

I started building on them November 25, but set them aside while I overthought the roofs and built the supply wagons.

They are fast and easy to assemble. In hindsight I should have painted the walls and timbers before assembly, but I am an impatient modeler. The two story building says that the roof isn't removable. Challenge accepted! I added some interior supports with balsa wood and cut a floor out of card. Then I cut some roof trusses out of corrugated box board. I also topped off the open chimneys with some proper chimney pots made from plastic tubes.

The laser cut MDF roofs aren't overly inspiring, so I cut a bunch of 1 cm by 1.5 cm shingles out of cereal box card and reshingled the roofs over Christmas Day and Boxing Day while watching Hallmark movies and socializing in the living room with Mrs. Rabbitman and Daughter No. 2.

Painting details on Prussian musketeers was an issue, but I could still slap paint on bigger things like roofs and walls, so I did. I didn't bother priming first. I just lathered on the craft acrylics.
One of the cottages did not have a chimney, which bothered me. So I added one with a chunk of insulation foam and inscribed the brick details and flue with a pointy tool. 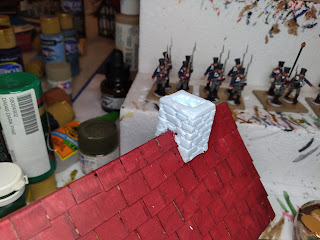 The other two houses have MDF chimneys, with laser etched stone work which was less than thrilling, so I've masked it with a fast and impressionistic paint job. 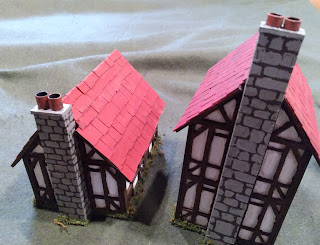 I flocked the small lip of the MDF base to help tie the buildings into the table top.
I have plans to make a walled courtyard to join the two story house with the barn using some styrene brick sheeting I have. But that will be for January. 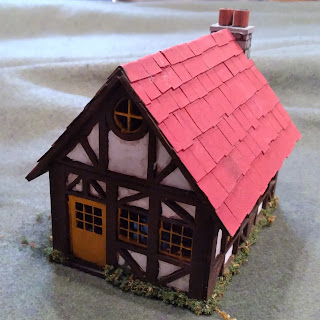 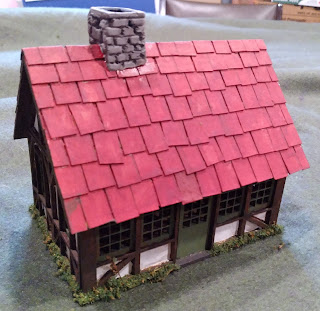 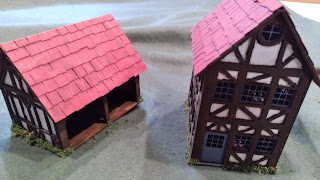