Busy, busy this month with wrapping up the cadet training year. So progress on the Pacific naval stuff has been slow.

First attempt to base them was set back by vapors from the superglue clouding the plastic. Shame it didn't make a nice wake pattern.

I switched to PVA which seems to be giving a good enough bond.

I am thinking that maybe just a tag big enough for a label would be better, easier to store and not accentuate the "banana boat" issues. I'm currently making labels in MS Word and trying to name each ship. The names may not be exact to the ship silhouette, but will adhere to the class, number of turrets etc. For economy I only bought one .stl each for all Japanese heavy cruisers and US 8" and 6" cruisers. I find the differences between a Northampton, Portland and Pensecola class 8" cruiser pretty small. Same with the two major classes of 6" cruisers, so I went with the Brooklyn, because it's iconic. All my US destroyers are Fletchers as well. The Fletcher class DD is just a good looking ship.
Last weekend Weirdy Beardy and I trekked down to deepest, darkest southern Ontario for a friend's 60th birthday. The birthday boy started out by running a game of "Charlie Company." He plays this like an RPG. All the players play the Americans and he runs the VC/NVA who remain hidden until we successfully spot or they come out int he open to attack etc. We were an American Armored Infantry platoon, recently transferred form Germany and tasked to sweep the area for signs of the reported NVA regiment in the area. I played the Lt, other friends played the section commanders, platoon Sgt, and the tank commander.
You can see that his set up, put together when kids were small and money tight, is basic, but still works and the game is still good.

It was all suitably chaotic and foggy as some of my Grunts tripped mines and mortar bombs rained down us. My Lt earned the Silver Star for running into the mortar barrage to pull a wounded man out while under fire. We didn't kill anyone and never did see the enemy as our reactions successfully frustrated the planned ambush as we learned in the post-game debrief. Historically, the NVA launched their ambush and tricked the American forces into firing into the village, where villagers had been tied up to become victims of the cross-fire and provide the Communists with political capital on the international stage. So even though we didn't know it, and took four casualties and didn't get any body count, it was a major victory for the US.
After dinner I ran an eight sided Hunt for the Golden Teapot of Petra. Adventuring archaeologist, Ohio Smith has sent back a priceless artifact and a group of mysterious Foreign Gentlemen wearing fezzes have arrived in Pottersville to retrieve it mid-transit to Harvard. Their hired PI, Jack Malory, has made inquiries and this has got all the major players in Pottersville descending on the warehouse to grab the loot for themselves. I even got to play this time. 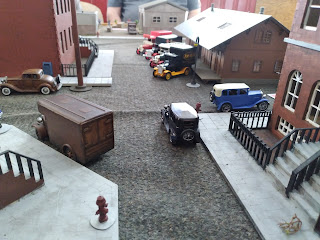 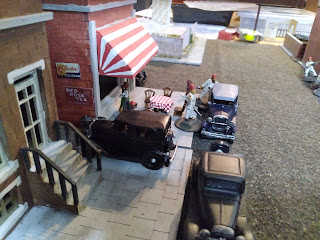 I got wiped out, but it was big fun. With most of us eliminated or down to 1 or 2 figures, we declared the birthday boy (Pottersville PD) the winner, since he still had all five of his characters left and control of the warehouse. Sgt. Crueller is going to have a nice retirement nest-egg set aside.