Yesterday was supposed to be a day of training seminars for our 5th year cadets. But Detachment kindly scheduled something else that day, so our plans got bumped. This meant I was now free to go to KEGSCON. This is a one day gaming convention held in the Chatham Legion hall, hosted by the Kent-Essex Gaming Society (KEGS), a pretty active bunch of splendid chaps who I think are scattered from London to Windsor.

This is KEGSCON's second year, and they're still trying to get some traction. It was a two hour trek for Wierdy-Beardy and I from Stratford, so Pasha Dan and the Mad Padre had an even longer drive. But four fellows came from Toronto and put on a spiffing game, of which I shall speak more anon.
Friday, Mrs. Rabbitman and I packed up the store.
Wracking my brains to try and predict what would sell, what would be a waste of space, and what we should bring anyway just so folks know we have it. Fortunately Martin's van is pretty roomy.
Martin was coming with his van to take everything down Friday night and set up bright and early. He would run the booth and I could spell him for breaks (which he never needed) but otherwise I was off to have fun.

And fun was had.

Mikey and I arrived around 10, so the morning games had started. But the Wings of War guy didn't have players, so we jumped right in, flying an assortment of biplanes to try and shoot down a pair of Gotha bombers.

This was my first time trying the popular WW1 air game. I quite enjoyed myself. A lot of the technical detail is nicely buried in the unique maneuver decks for each aircraft. Saves a lot of fussing with tracking airspeeds and such.

Of course shooting down the lumbering brutes wasn't as easy as you'd think. Flying into some German 'Archie' and catching fire didn't help either. Both bombers got off the table edge, although one only had ONE damage point left!

Then after some more schmoozing with people and lunch (beer, burger and chips), I got into a game of FUBAR set in Afghanistan run by four young fellows from Toronto showing the colours for The Most Glorious Order of the Magpie (formerly known as the Toronto Historical Gaming Society). A team of US Spec Ops fellows have to search a village and rescue two downed pilots.


Fun game with lots of tense decisions, some spectacularly bad die rolling (fortunately it was on both sides!) and beautiful toys. Those Spec Ops guys may have some great game stats but when somebody goes down, well now you're seriously handicapped. I'm starting to like FUBAR.

Next I joined the guys in some X-Wing. The Mad Padre let me take over one of his Y-Wings. I hadn't played this popular game yet either, so it was fun to get a taste of it. The Padre and I shot down the big shuttle, but I got blown up by it's escort and the Padre bugged out with only one damage point left! 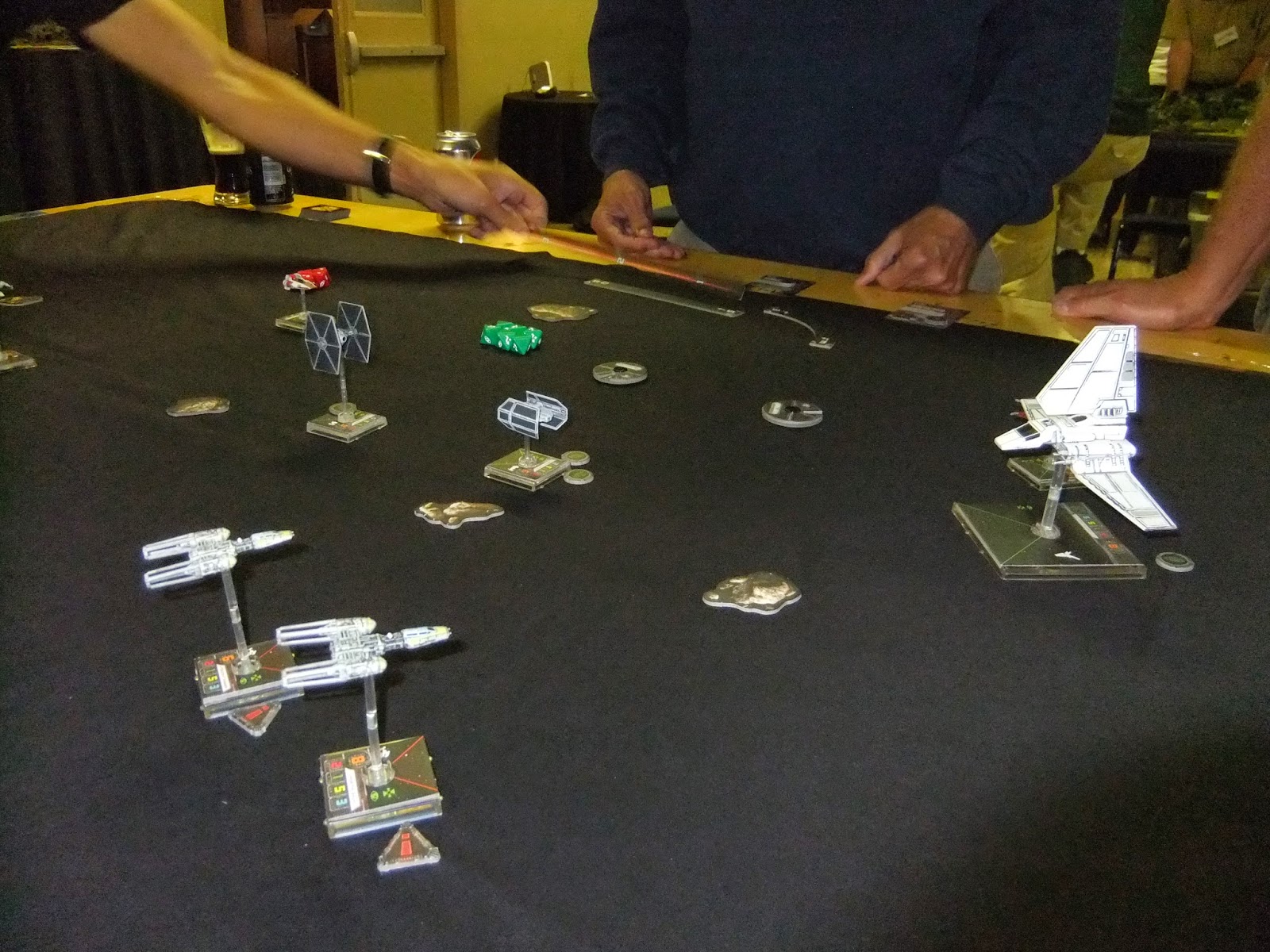 I didn't get many pictures of the other games though. There was also some Flames of War and a very pretty Dux Britanniarum game.
After dinner (most of us had the fish and chips special and we all sat around a big game table to eat together) it was a massive, silly, last man standing wild west shoot out. 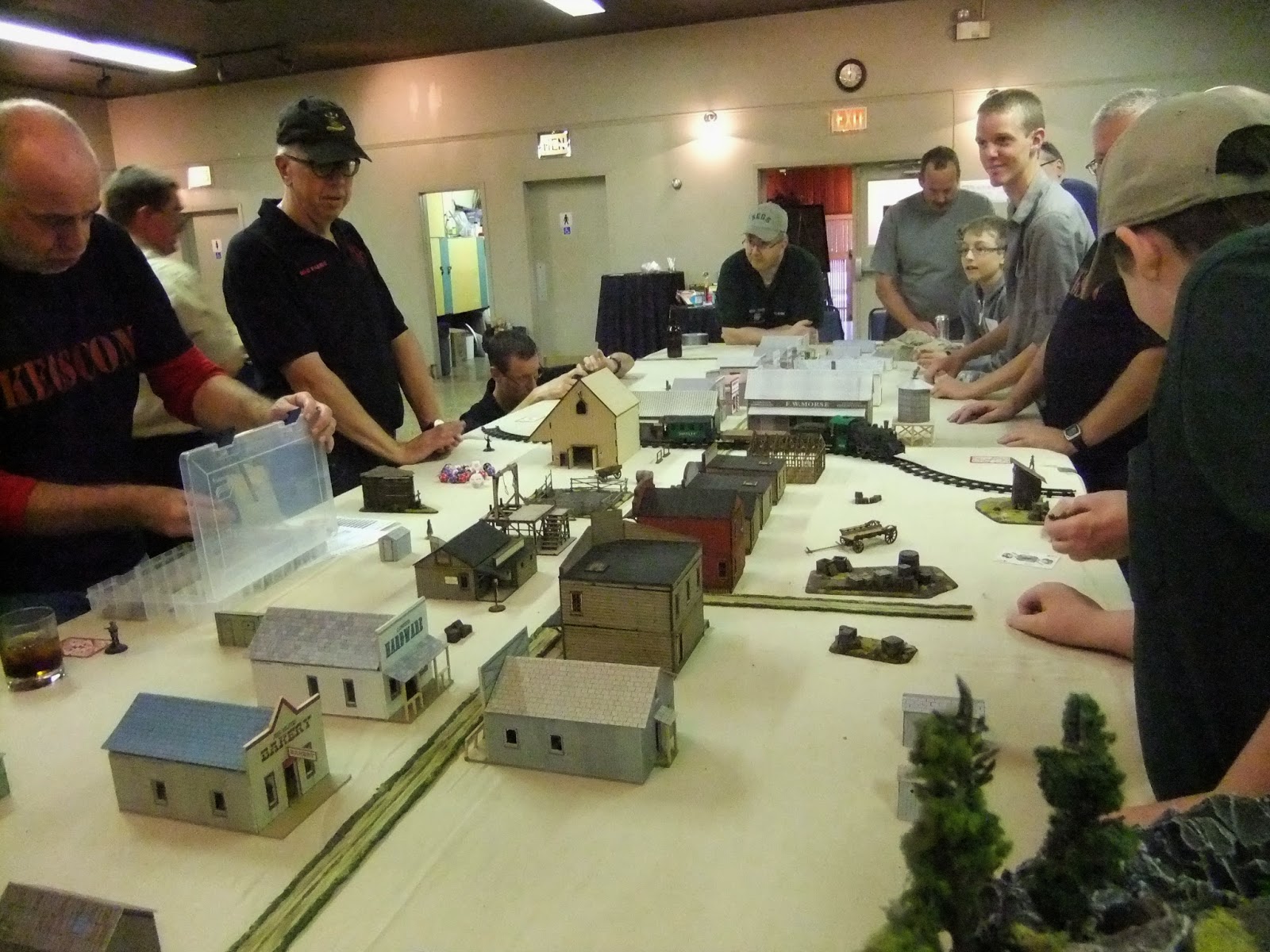 Keith and Jason put all of their Wild West buildings and terrain out. Everyone got a figure and the mayhem began. Alliances were formed and as quickly betrayed. I took a lot of wounds very quickly which resulted in me spending most of the game bleeding in a house. When I finally staggered forth I had a misfire and killed myself off with a bullet in the leg! 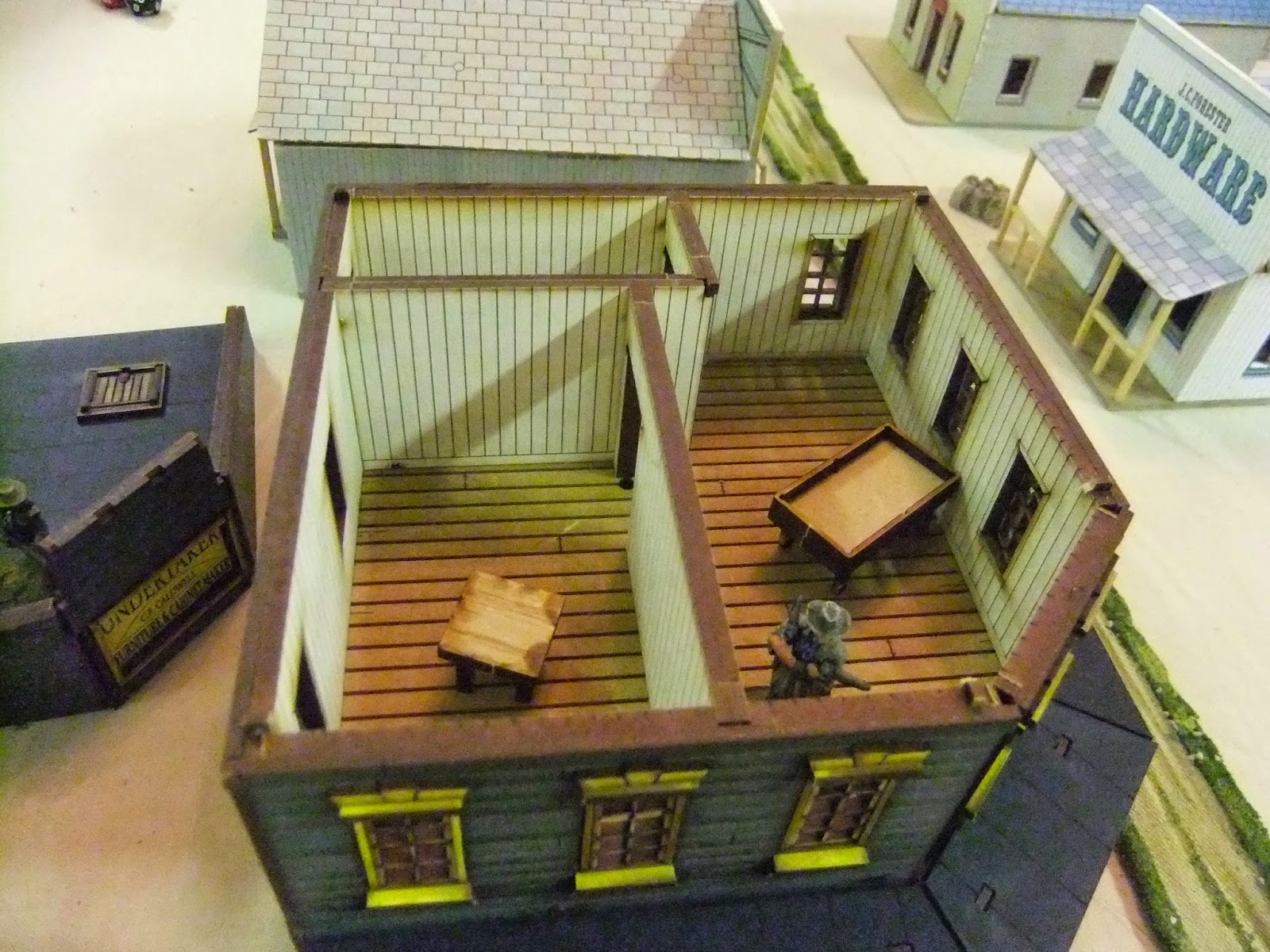 I did take some shots of the interiors of the lovely 4Ground Dead Man's Hand buildings with some furniture in them. 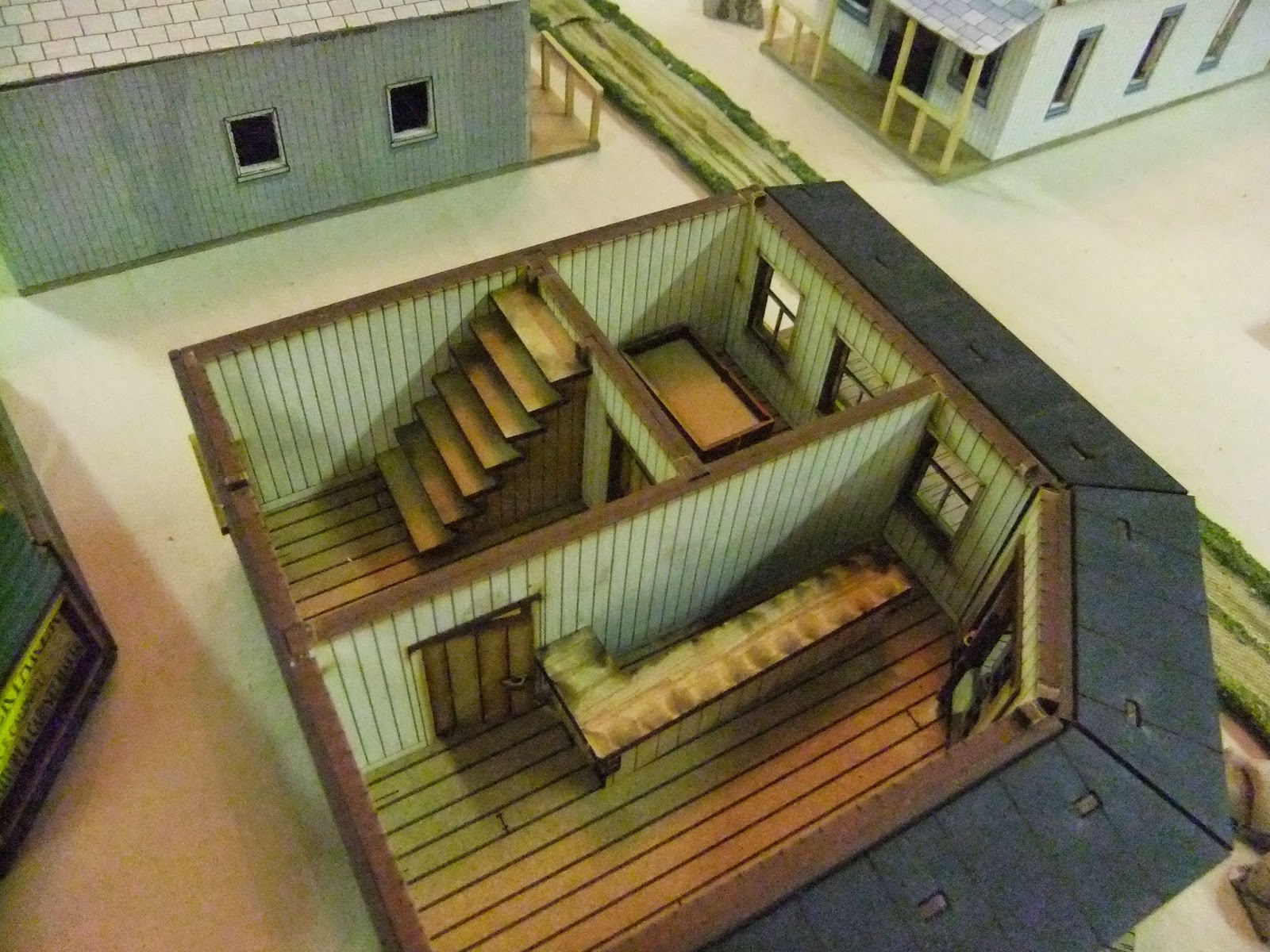 I mentioned the furniture to the players around me. "Was that a shameless plug?" "It was a plug," I replied. "There was nothing shameless about it." 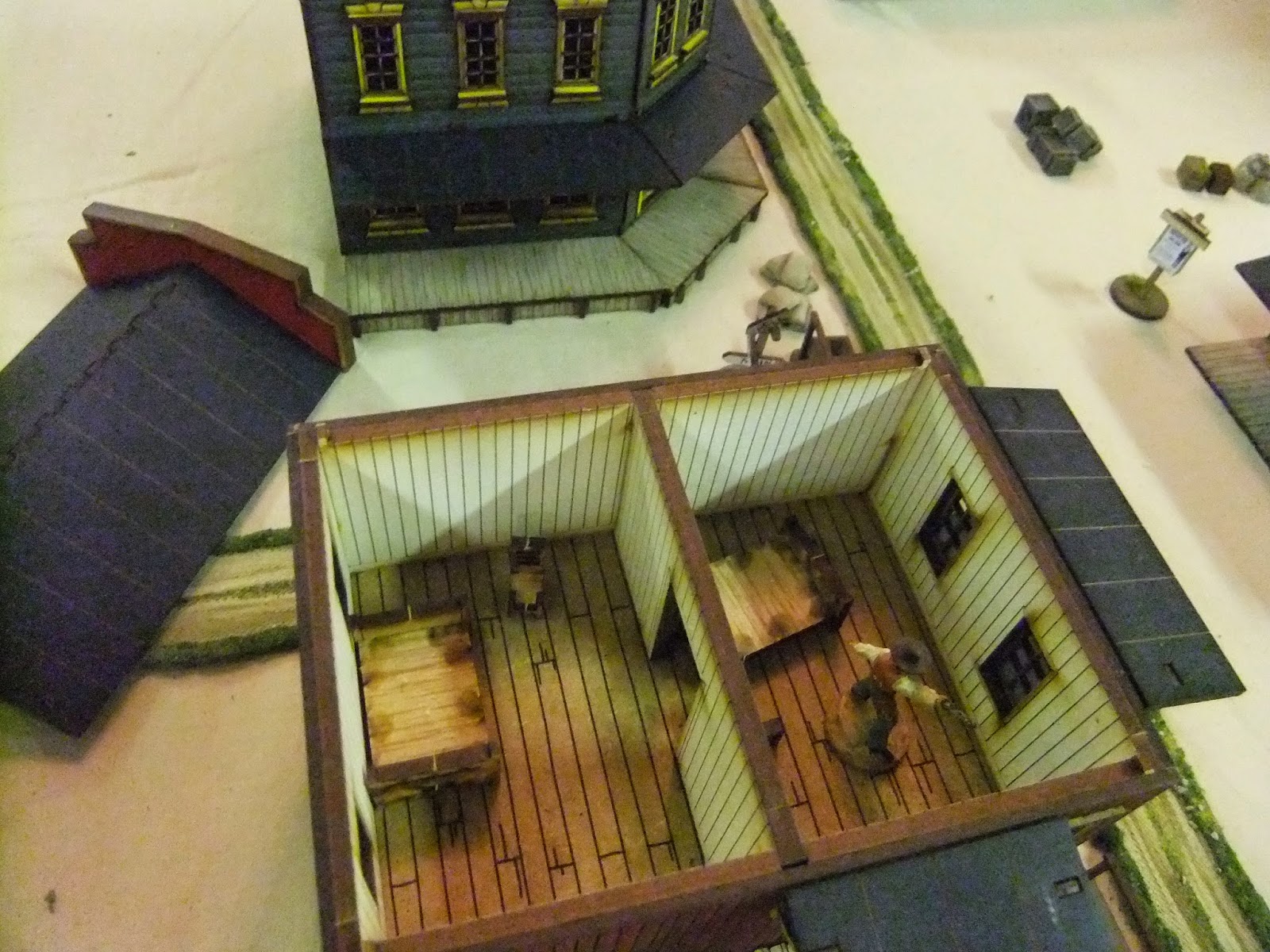 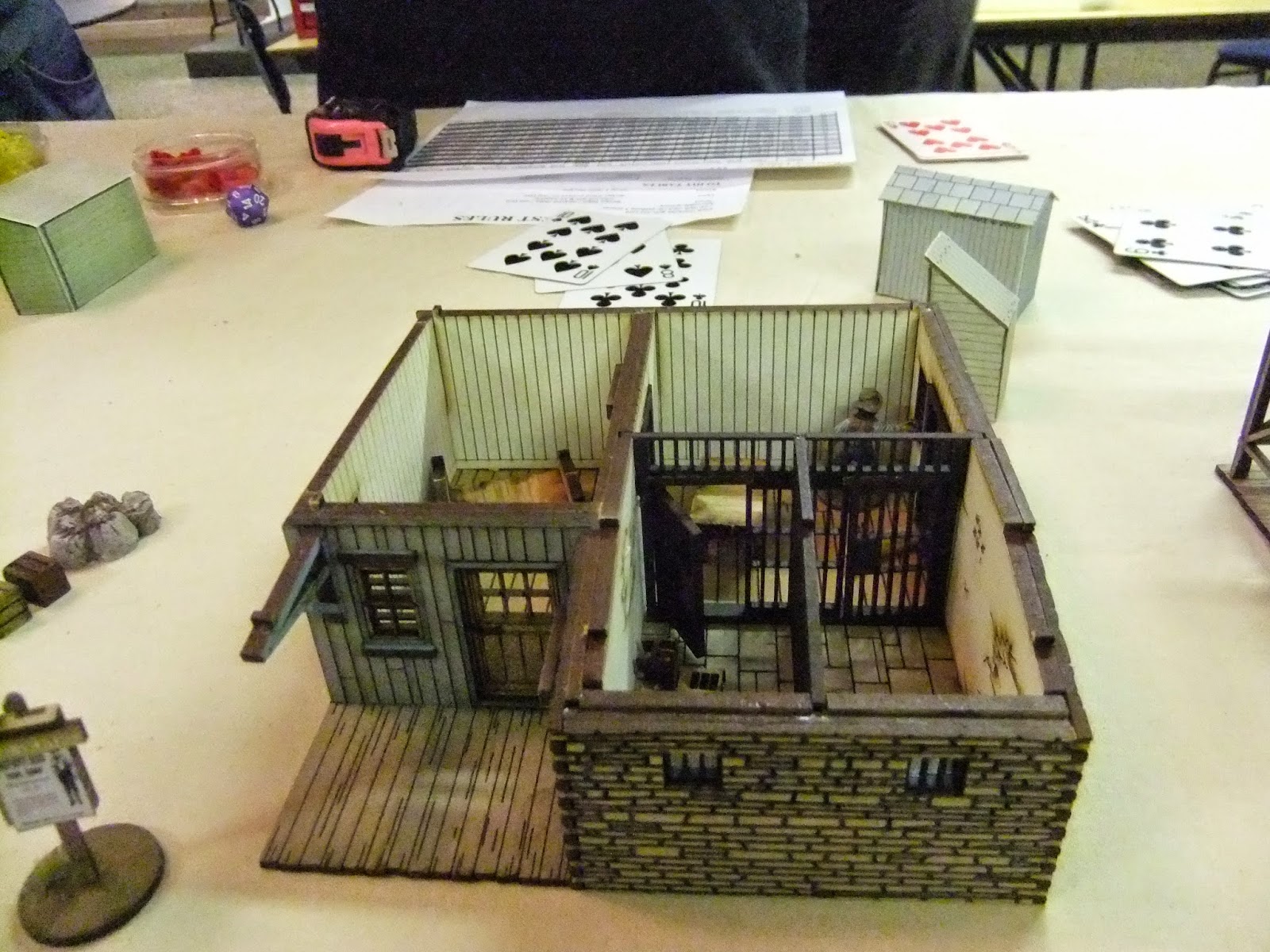 So after all that, Mikey and I staggered home in a rainstorm, trying to rehydrate and fend off the too much gabbing, too much laughing, too much having fun and eating bad food headaches that always get me at these things. Martin and Stephen had already packed up the store and left, so I got home to a pile of totes in the living room.

Mrs. Rabbitman and I are spending our Sunday morning having a lot of tea and taking stock, putting everything back on the shelves and seeing what sold and what didn't. For a small crowd, sales were actually not that bad.
Posted by James at 12:35 PM