Some hobby time over the holiday meant that I've finally finished off that lot of second hand Vendel Elves I got back in May of 2017. So the Lord of Hollin now has 4 units of elite foot plus, since I hate leaving figures in the box, the king now has a Close Protection Detail of two spearmen (So he's still a reduced figure unit, just with 3 figures instead of 1).

The original owner sold them off because of some issues. A lot of non-fills and the standard bearer had this big tumor of flash on his cloak. I was preparing to do battle with it when I remembered that I work in a machine shop.... well a few minutes with some of the grinding and buffing tools during an evening shift had this sorted.

Here are the new troops.  Did half with white trees to match my original yellow tree company. The other six with a curling leafy design taken from fellow Middle Earth gaming blogger Iron Mitten, so I'll have to figure out a banner to suit them. 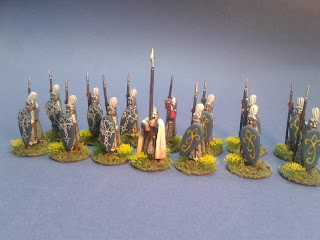 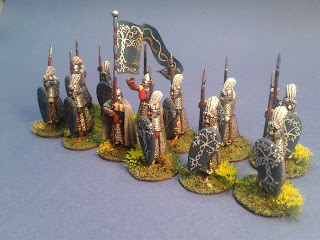 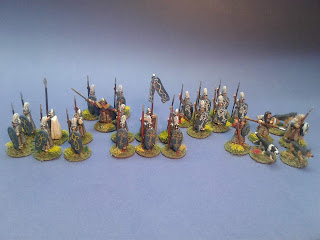 The nobles were initially doomed for the lead pile. But the small scale Reaper wolves gave me the idea to paint them as dogs and then make them into a unit with the three nobles. The shields had designs cast on, so I tried to paint them along the lines of elvish heraldry as painted by JRRT himself. 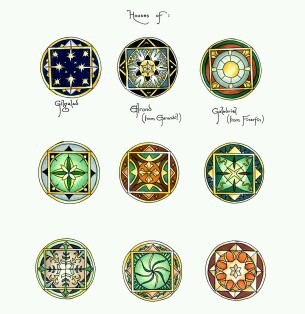 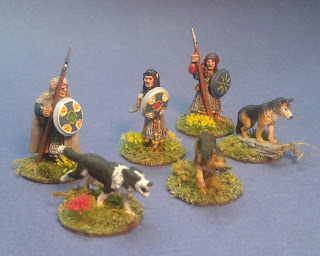 Since they are fleet of foot hunters with quick dogs I may make them elite riders too. Perhaps each noble with dog is a reduced figure unit? Elf lords are supposed to be pretty scary.
Posted by James at 6:24 AM