"Christmas crackers I'm c-c-cold!" whined Tinkle the Elf as he packed more snow together into a big ball. His hands were raw and chapped. It would hurt a lot when he got back to sewing doll clothes. If he got back to the warm workshop that is.

Freeble the Elf quickly jammed some twig arms and a carrot nose onto the snowman Tinkle had just made. Frosty then waved his twig arms over it and it jerked to life, rolling off to join the ranks of the other snowmen brought to life by Frosty. Frosty moved to the front of the white silent phalanx of snowmen, waved his hat in command and they all silently moved towards the front. 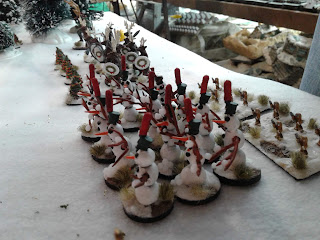 Tinkle was worried. For ages they had lived quietly at Santa's Workshop making toys and singing happy elf songs. When Mrs. Claus started baking extra large Gingerbread men he hadn't worried. Then the orders came out of the office to stop making toys and start on spears and shields. Lots of them. The extra big gingerbread men were now armed and defending Santa's workshop, alongside some rather scary teaddy bears. Now it was all set to end in fire and tears. 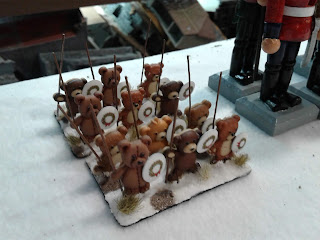 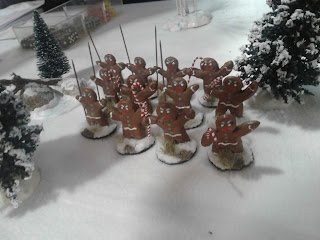 A platoon of huge nutcrackers lumbered past, arms and legs clacking militantly. 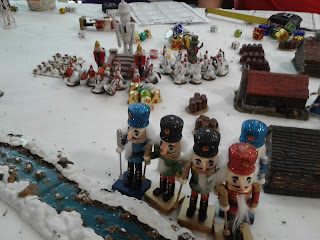 In the distance Tinkle and Freeble heard the braying of harsh horns and the bellowing of strange beasts. Wolves howled. Then a dragon roared. It's wings beating like a rush of wind, it swept low over the village. It belched flame and the Toy Express exploded in a shower of sparks. Harsh goblin cries of triumph greeted the sudden onset of doom.

"We'll see about that you foul beast of Hell!" cried a bearded figure in red cloak and bishop's mitre. St. Nicholas raised his staff and opened a huge book, uttering words of power. Multicoloured sparks crackled smiting the dragon. The fell beast roared in pain, mortally wounded and fled the field. 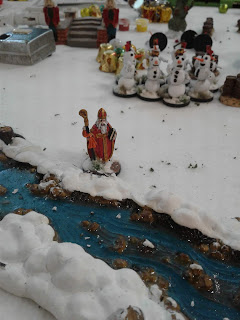 "Hooray! Hooray!" shouted Tinkle and Freeble as they danced in the snow. They ran to the kitchen and each grabbing a mug of hot chocolate, they climbed to the roof to watch the unfolding battle.

Everywhere they looked there were dark masses of goblins and big lumbering trolls. To the left of the smashed and smoking train was a force of black knights, goblins riding wolves and dire wolves lead by a black robed wraith with a glowing sword. "oooooh he looks scary" said Tinkle, slurping at his hot chocolate. 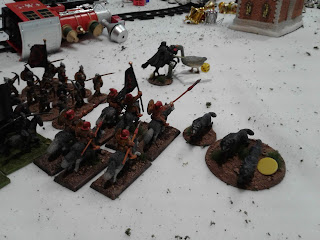 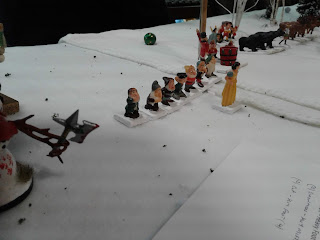 "But look!" shouted Freeble. A big angry goose, backed up by Snow White and her Dwarf friends, plus Cinderella and some animals were attacking the wraith. Birds and deer skirmished around the Naughty cavalry, jabbing and dashing away. The goose honked and hissed, snapping its beak at the black wraith. Dumbo the elephant flew low over the evil cavalry, pooping on them. "eeew!" squealed the Elves. "Dumbo, don't be gross!"

Under constant assault, the wolves and black knights were whittled away. The wraith cut the goose's head off, but it was too late to make a breakthrough to the workshop. Frosty had built his battle line of snowmen, who began hurling snowballs at the evil forces. 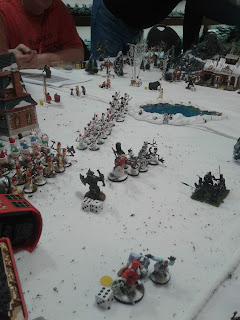 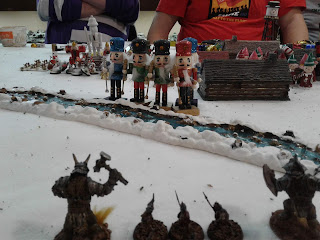 To their right, Tinkle and Freeble could see that the goblins and trolls had advanced the furthest, right up to the river. A platoon of nutcrackers stopped on the other bank, watching with impassive painted eyes as the black goblins massed opposite. Suddenly KA-BOOM! The nutcrakers exploded taking the goblins with them. Some plucky children, told by Mrs. Claus to stay back and keep out of mischief, ran forward, hurling snowballs at the survivors.

Rudolph bellowed his war cry, leading some reindeer forward across the river. Goblin and troll bellows answered as the evil horde emerged from the forest. Beasts, good and evil, crashed into each other. Scimitars and claws met hooves and swords. Reindeer fought valiantly but were ground down under a wave of hatred. Rudolph leaped from a rock into the horde of Naughtiness. A mighty troll crashed down, it's black blood staining the snow, goblins fled in panic, but a company of hobgoblins swarmed over Rudolph, cutting him down while the rest of his herd fled.

In the center, Santa Claus charged forward with some nutcrackers and abominable snowmen, swinging a sword in one hand and his sack (loaded with coal for today's naughty list) in the other. Goblins and trolls fought hard beside the still burning train. A nutcracker toppled like a mighty tree. A troll bellowed in pain and fled the field. Tinkle and Feeble spotted a black robed figure with a staff trying to cast spells on Santa, but his innate magic warded them off. 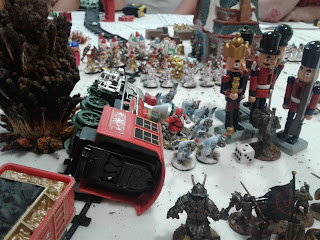 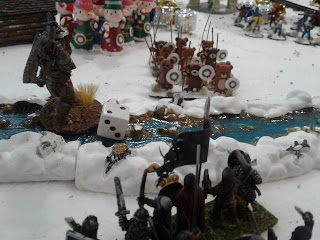 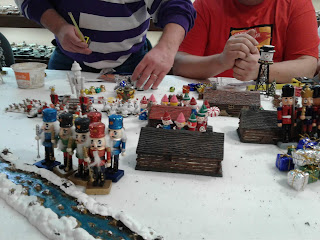 Soon Tinkle and Freeble could see black figures running away all over the field. "Hooray! Hooray!" they shouted, dancing on the kitchen roof, waving their cocoa mugs. "Christmas is saved!"

That was the opening game of my gang's annual holiday gaming get together. It was a massive 12 player game of Dragon Rampant. Pete and David spent about 8 months building the Forces of Nice; snowmen out of sculpy, gingerbread men and teddy bears made from buttons and thumb tacks, a few novelty Christmas miniatures and some nutcracker tree ornaments. I brought my Nazgul and the Legions of Angmar to be the Forces of Naughty. Pete says he's going to make some dedicated Naughty troops for next year.

Pete introduced Naughty or Nice cards. Anyone wearing something seasonal got an extra card. Half were lumps of coal, half gave bonuses to moving shooting etc. St. Nicholas played a card giving rerolls on misses when he attacked my dragon, scoring 11 hits and knocking 20 of my 160 points out if the game! I got lumps of coal in my cards.

The day was also the inauguration of Dick's basement of toys and his TWENTY-FOUR foot gaming table. The next round we did a game at each end. Dan put on a game featuring Canadian Peacekeeprs in Somalia trying to keep rival warlord factions from looting the UN Camp. At my end we played Pig Wars; four bands of Vikings all looking to get a piece of the Bishop's treasure. I didn't win, but I didn't lose as badly as some of the other guys. 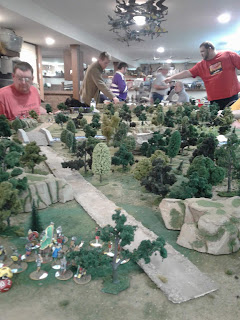 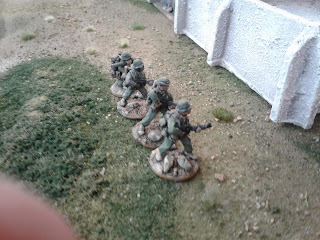 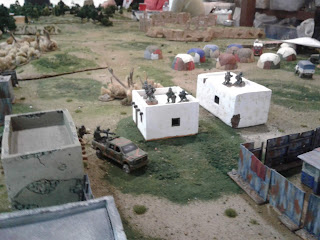 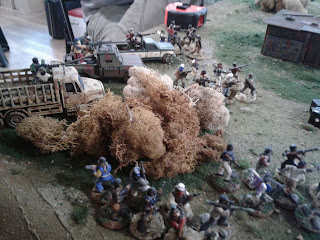 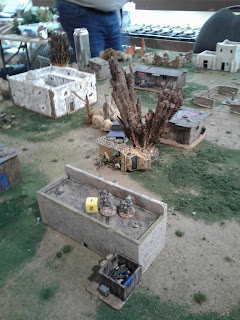 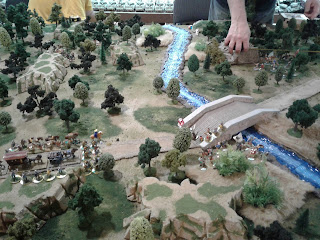 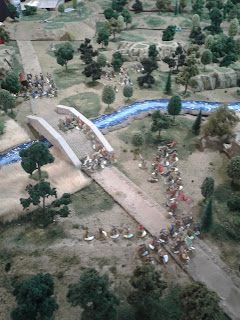 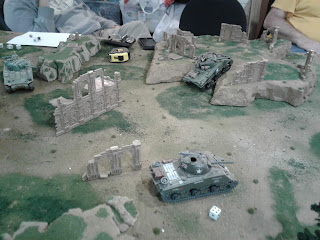 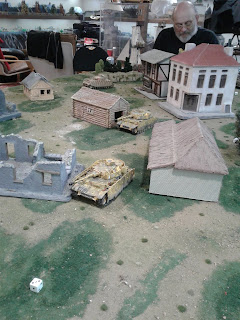 After dinner most of the crew left, so the six remaining die hards played What A Tanker using some tanks from Dick's 1:32nd scale collection. This is I believe, is exactly what WaT was made for. Something fun after the main games are done. I didn't blow up.


Food was eaten. Dice were rolled. Fun was had. A grand way to see out the old year.