I felt inspired to properly "Wet the head" of my new Schützen this past weekend and set up a solo game of Sharp Practice. I also wanted to get my big river and stone mill out, which I haven't played with in some time, thinking it and the bridge might make a good objective to fight over. Each side was 80 points.

Hans ran his hand gently over the seed heads as they filed through the field. It was a good crop, almost ready to harvest. The kind of field Pappa would be proud of. "Hans!" hissed Franz. "Quit day dreaming and catch up or Die Harfner will have you!"

Hans hustled to catch up, his gear clanking. At least they weren't trampling too much grain as they passed through. A battery of 12 pounders would make a real mess of the field. "Krieg ist scheiss" he mumbled to no one, and wished not for the first time, that he was back home.

Hauptmann Scharf was leading his company of green jacketed Schützen towards a good stone bridge overlooked by a big stone mill. Maybe, thought Hans, there would be some food or  perhaps beer in the mill. Millers always had a good larder, prospering from grinding the surrounding farms harvests. Daydreaming of sausages, he strove to catch up. "Do you think there'll be sausages, Franz?" "Weiss nicht" came Franz's weary reply. "I do know that the Russians will eat them all if we don't get there first."

"Feldwebel Harfner! Take half the men into the mill and cover the approaches to the bridge." Hauptmann Scharf ordered. "The rest of you" he said indicating Hans' half of the company "follow me!" Hans' heart sank as they scurried to the end of the bridge at trail arms.

They took cover around the walls of the bridge and cocked their rifles. Scharf pointed out some green trousered Russian Jaegers advancing in a column through the village towards them. "Get those bastards! Fire!" he roared. They took careful aim and began firing, working in pairs. One aiming and firing while the other reloaded and watched the flanks. A couple of Russians sprawled in the dust and the rest of them dashed into a cottage to take up positions inside and in the garden. Hans and Franz began trading shots with their enemy counterparts, musket balls smacking into the stone wall covering them. A green jacketed Schützen spun backwards into the dirt as a Russian musket ball found it's mark. Hans pulled him behind the wall and pressed a dirty handkerchief to the wound.

Huber, the trumpeter, who clung to Scharf like shadow, blew a call. "Cease fire! Reload! Ready!" Scharf bellowed. With his sword he pointed out a bigger column of Russian Grenadiers marching up the road, tall plumes waving, and flags snapping as they hurried towards the thin line of Schützen.

Hans heard shots from his right and saw musket smoke coming from the mill. Feldwebel Harfner had his half of the company firing into the flank of the Russian column. He felt his guts go cold as he sighted along his rifle, aiming at the cross belts of a big ugly looking Russian who he knew wanted to skewer him with his bayonet.

"Fire!" Scharf roared and their rifles barked. "Tap reload! Fire!" Trading range for speed they reloaded their rifles by banging the butts on the road and dispensed with the niceties of the ram rod. It wasn't good for the rifles, but when speed was required it was better than being dead and the Russians were close enough that the range didn't matter anymore. The Russian grenadiers kept coming, stepping over bodies.

"Hold them lads!" Scharf bellowed and aimed a heavy blow with his sword at a Russian sergeant. Soon the end of the bridge was a chaos of parried thrusts, spurting blood and groaning men. Shouting with fear and rage, Hans deflected a bayonet aimed at Franz, swung it up and stuck the tip of his sword bayonet into the Russian's throat. A big bear of a Russian, mustaches flaring, drove another rifleman back and pinned him to the ground with his bayonet. Hans was trying to get his bayonet out of his victim as the big Russian turned his bloodied weapon on him. Franz leveled his rifle and shot the man in the side of the head from two feet. "Can't miss a shot like that" he observed.

The Russians were wavering and falling back in disorder. "Get them lads! Keep shooting!" Rifle fire from both groups of Schützen added to the chaos on the bridge and the lead elements of the Russian column broke and ran, taking the rear of the column with them and causing chaos in a column of musketeers even now marching up the road.

As their firing died away Hans heard marching feet and barked commands behind him. Turning he saw a company of their own grenadiers form up in a neat line.

"Present!" the Grenadier Lieutenant called out and a line of muskets were leveled.

"Right lads" Scharf called. "Everyone to the mill by files. Move!" Leaving the end of the bridge to be held by the Grenadiers they dragged their wounded over to join their comrades sheltering in and around the big stone mill.

As soon as they were clear the Grenadier Lieutenant yelled "Fire!" sending a volley crashing across the bridge to finish the rout of the confused mass of Russians. The overwhelming shock spread and multiplied as the groups of Russian infantry recoiled through each other.

Feldwebel Harfner was guarding a barrel of beer by sitting on it while he directed the firing. "All those Russians, I thought you were done for sure, sir" he said as Hauptmann Scharf walked up. "Bastards haven't killed us yet, Dominic, you know that" said the Hauptmann, wiping blood off his sword. "Aye they tried their best last year, didn't they?" He made sure everyone got a drink and then positioned them along the river bank.

Some skirmishers moved into the building opposite them but didn't do much except for some desultory sniping. Hans was able to watch the grenadiers firing volleys into the cottage containing the Jaegers. More green coated troops from their light battalion to the left of the grenadiers added their musketry to the firefight. A lot of smoke billowed over the river but the sound from either side didn't seem to diminish.

Then another column of Russian infantry appeared, an officer at their head, waving his bicorne on the end of his sword. "Urrrrah!" they shouted. Hans' blood went cold remembering that cry as Cossacks swept in for the kill over frozen fields. 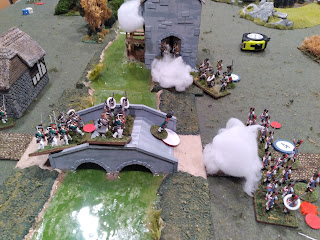 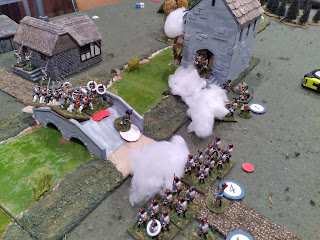 Scharf went along the firing line directing their rifles, pointing out targets with his sword. "Kill those bastards!" he shouted. They aimed into the green column surging over the bridge, firing again and again. Hans watched as coolly as if on a parade square the Grenadier Lieutenant ordered his command. "Load! Present!" a pause as muskets leveled, aiming at the column advancing on them, ignoring the sniping form the Jaegers. The Grenadier lieutenant watched, timing his volley, the breeze rippling the red plume on his helmet.

"Fire!" he bellowed as if by his voice alone he could shout the Russians off the bridge. The muskets crashed out. The Russian officer at their head spun and fell, his bicorne flying away. The Russians had had enough. Hans heard shouts and they began backing away, then as a few more fell from the schutzen rifles, turning and running away. Soon after he saw the Jaegers that they had first engaged leaving he cottage and retiring through the village.

As Huber gave the 'Cease fire' on his horn Hans heard the Hauptmann call out "Feldwebel, is there any bread to go with that beer? I'm starving and I'm sure everyone else is."

"Don't you worry Mein Herr, the Frau Miller is making some good sausage and cabbage soup for us already!"

Hans nudged Franz. "Hear that? Sausage and cabbage soup! That's more like it."

Franz was busy cleaning his barrel out. "Yes, yes it is."

Scharf's Schutzen had a pretty good first outing. They were able to use some hands of Command Cards to get to the bridge first and get a few critical extra rounds of firing in on the Grenadiers. I was shocked when they held the Grenadiers in a round of fisticuffs, winning by a narrow 1 kill, but all the shock put on the Russians counted heavily against them and I felt it overruled the 'Stubborn' trait that I had given them. The Russian Grenadiers had also been hampered by their officer being knocked aside and left behind with a Random Event while marching through the village. I shouldn't have pushed them forward on Command Cards after the Tiffin. But I had thought that they could push the Schutzen side easily and then deploy to meet the Bavarian Grenadiers. In hindsight, the lack of subordinate Big Men also greatly hampered the Russian Formations. Having a level 1 around to take shock off is very helpful. The Musketeers lost an entire Group just from the shock it picked up being interpenetrated by fleeing Grenadiers!

Once again I have proven to myself that advantage in numbers is negated by attacking on a narrow front without adequate supporting fires. I should have waited for both infantry formations to come up and then tried fording one group through the river to broaden the frontage of the attack.