While painting the Grenadiers I had the happy thought to make a battalion of Reserve Infantry. Reservists were an important part of the Prussian scheme to rebuild after the debacle of 1806 and the limits to the size of the Army imposed by the treaty with Napoleon. The Reserves and Landwehr were a significant portion of the army from 1813 to 15, providing approximately one quarter to one third of the strength. 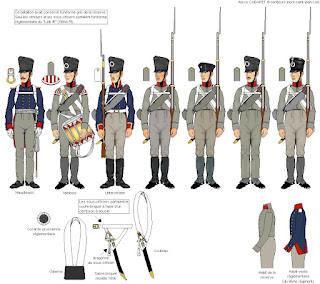 The uniform was simple and a welcome break from unending ranks of dark blue. The biggest difference was a lack of coat tails and turnbacks and simple cuffs. I found that with careful positioning I could make sure the cartridge box and small pack hid the offending coat tails and all I had to do was trim off the sword that the Reservists weren't issued with (despite the graphic above). I chose to just paint over the cuff placket instead of trying to trim it down. The cartridge boxes also shouldn't have any brass plate, but instead of trying to trim that off I just painted it out. Fortunately I hadn't assembled all of the plastic jaegers, so I still had some heads with the peaked cap to give me a nice irregular mix of peaked caps, fatigue caps and shakos. I pondered having a command group, since officers and NCOs wore the uniforms from their regular regiments, but the drummers wore the short Reservist jacket. The Perry figure has very obvious coat tails and I didn't want to have a stray drummer without a unit.

With 16 figures I could make them a small 2 group formation for Sharp Practice as well. The attached Big Men wouldn't be any different in their blue coats.
Painting was pretty straightforward, dark grey, then a lot of mid grey highlights. I opted to further lighten the bedroll some more to help it pop and give a bit of visual interest.
The backdrop is a free download from Jon Hodgson. I've noticed that figures appear brighter against the mountainous backdrop than the misty one.
One battalion of Fusiliers to paint and I'll have a complete brigade of 9 battalions plus Grenadiers done. 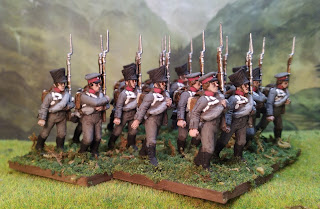 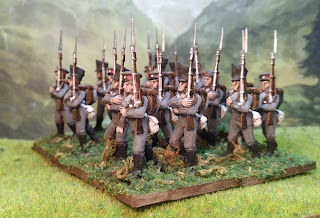 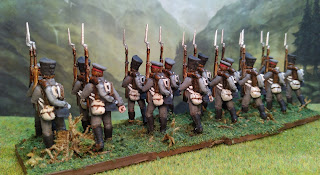 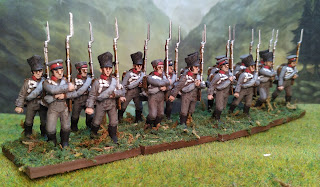 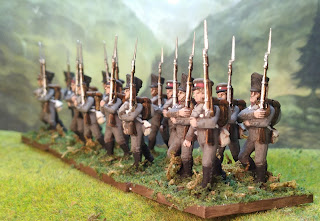