Many years ago I spent a lot of my allowance on Rocco Mini-tanks to use with my Airfix soldiers.
Eventually I passed them along to my friend so he and his young son could use them.
Then while perusing the Bring & Buy at Hotlead I see these 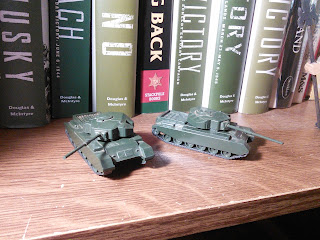 My friend's son is grown and he is moving house, so there were all my old Mini-tanks some 30 years later being sold off at 2 bucks each.
The Centurions were my favourites (I like the Centurion still) and these two were the backbone of the armoured corps for my African Imagine-ation, Ruanda in their long struggle with the neighbouring and quite aggressive People's Republic of Simbaziland.
Now reunited to me, they guard the Canadian section of my book shelf.