With my Canadians in Afghanistan project winding up I've been tidying up on some unfinished projects and pondering what to do for my Next Big Thing.

15mm Middle Earth gaming still calls out to me. Copplestone have some nice dwarves. Eureka have nice elves and goblins. I have enough unpainted Goths to field a Riddermark's worth of Rohirrim. There is also a new company called Battle Valor Games http://www.battlevalorgames.com/ who do nice figures, very Nordic looking dwarves and elves in long chain hauberks. I'll just be ruthlessly picky about what I choose for the armies.

It is something to think more upon.

And I've just heard that Great Escape Games is teaming up with 4Ground on The Chicago Way  http://www.greatescapegames.co.uk/chicago-way.html and gangster skirmishing. Like their successful western gunfight game Dead Man's Hand but with Tommy guns. Certainly the buildings intrigue me, since that was my issue with doing gangster skirmishing previously. I have lots of gangsters and cops. They just need decent real estate to fight around.

The new edition of Sharp Practice could get my 28mm Napoleonic troops another look and time under the brush too.

Or I could just do some British or US Marines for the Helmand.

Or I could keep picking away at half done bits and pieces and not rush my fences.

I've also for a long time had a bizarre notion to do Pulp alt-history airship fleet battles. At the Ontario Model Show I picked up this baggie of spare drop tanks and rockets for 2 bucks. 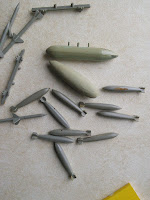 Some flight stands from Litko and some other pieces from Brigade Games (they have airships among their aeronef models) would be cheaper than any of the other ideas.