A Whiter Shade of Pale

A few things I had started before the Elheim Figures arrived and distracted me.

I finished painting those two die cast pickup trucks. They've made appearances in previous games but I thought I'd get them done. The factory finish gloss red was a bit alarming and I'm pretty sure the Taliban had some rules about car colours. 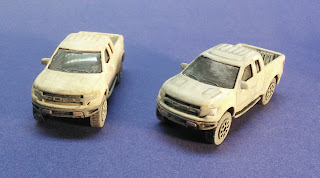 One truck was originally going to be an IED casualty, but I decided having an extra civilian vehicle or Taliban troop carrier available would be a Good Thing.

One truck got a black undercoat and I used thin grey for the creases. The second truck got gessoed white and then light brown undercoat before the white. Both then got covered in a good layer of dust.

Next up are two battalions of Austrians. Some Old Glory grenadiers and some Lancashire musketeers, plus a Lancashire general and a Peter Pig ammunition wagon from his American Revolution range.

The Lancashire figures are OK. The metal is softer and the detail isn't as good but I got them at a good price. The flag staff seems a bit on the long side though. 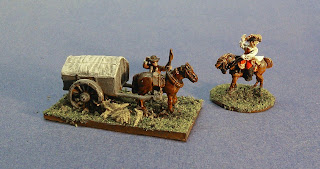 I need to boost the Grenzers and the cavalry next.

That's a lot of white. So here's an appropriate classic rock tune