Gave my NWF army lists a road test this weekend with Patrick. I also wanted to finally give some cavalry and artillery a try too. Patrick was new to the rules, and with the other new things I decided upon a straight forward game with a small Imperial force attacking a tower controlling a valley. 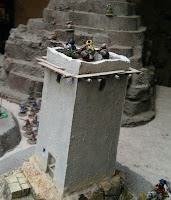 After discussion on the Sharp Practice Facebook page and seeing how few Pathans I got vs. the Anglo-Indian forces, I increased the cost of Imperial infantry by 4 points per group. I also ran the Pathans entirely as skirmishers as suggested by one of the group members.

The Anglo-Indian force had:

For his 10 support points Patrick took a water carrier, an ammunition mule, a Chaplain and upgraded his artillery commander to level 2.

For my 5 support points I took 5 sangars. Although a Holy Man or secondary Deployment Point would have come in handy.

My DP was behind the tower and out of sight so as my formations came on they were able to deploy with the sangars on either side of the tower. One group occupied the tower. Another formation went up the mountain on my right to snipe at the British. Two other formations went left.

The Gurkhas came on first and pushed straight to the tower.

Patrick deployed the screw gun to support them on a small knoll. The Lancers went to his left to contest the narrow defiles at the foot of the mountain. The British infantry formed a firing line in front of the gun.


As the Lancers maneuvered to get ready to charge they had a few saddles emptied by musketry from the defile and the mountain side.

Meanwhile I had pushed a formation out to my left to try and attack the British from the open ground. The Screw gun quickly swung into action and blasted them with canister. The British infantry then formed a firing line and unloaded a couple of volleys before they could activate. The 4 survivors out of the 12 man formation fled away with about 28 shock points and no leader!
The Lancers then charged down the defile before my tribesmen could reload (thus the dramatic musket smoke). Surprisingly, my tribesmen were only defeated 4 to 3. I could afford to lose 4 tribesmen, whereas losing 3 Lancers hurt Patrick very badly. More musketry as they retired reduced the unit even further to one sowar and the Big Man.

This allowed me to shift two formations out  of their sangars and start sweeping around the Imperial left. The Gurkhas had retired with excess shock after a bitter firefight with the tribesmen in and around the tower. So they started shifting to cover the Imperial left flank.
But I was able to get two groups to swoop down on the Imperial Deployment Point, dramatically butchering camp followers. A Random Event left them with a fortuitously covering Pall of Smoke between them and the Gurkhas.
In the meantime, I was also sending another formation of two groups further to my left to outflank the Imperials from the big hill overlooking their right flank too.
It was getting late by this time and the Imperial force was down to 6 or 7 Force Morale, and I was only down to 9. Time for the British to retire back to the main column.
So far so good I thought. The points seem balanced. Playing an entirely skirmisher army is interesting. I could have been more aggressive as the Pathan player too I think. I let a few opportunities slip by because I was unsure how things would work, and I wanted to see how some situations would play out. Getting some more troops in the initial list and then purchasing the gun as a Support Option might have been a way to go too. Although the Chaplain did rally several shock off the Gurkhas keeping them in the game.