The lazy days of summer have proven annoyingly busy for the Mad Padre and I. But I was able to get up to his for an overnight gaming visit this weekend.

After dinner on Friday (delayed by me being trapped on hwy 400 amidst the migrating hordes heading to cottages) we played the mega-boardgame War of the Ring again. This time I took Sauron and unleashed my Doom upon the kingdoms of elves and men.

Lots of little pieces and cards and tokens 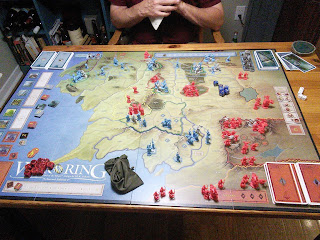 And bespoke dice, you can increase your dice pool by bringing fellows like Saruman or the Witch King into play. 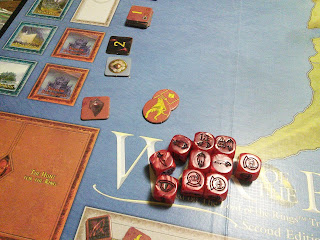 I decided to try and hammer Gondor, but you also have to balance searching for the Ring, which draws off dice and your ability to do things like muster troops and move armies. Mike took an interesting strategy and sent Gimli and Legolas off to rally their kin, while Aragorn and Gandalf moved to Minas Tirith.

I unleashed my wave of Doom 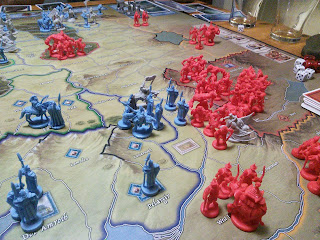 For more Doom, I managed to activate the Balrog in Moria. At the same time I sent the Witch King and other Nazgul to hunt in the area for the Fellowship.
This scared the willies out of Mike as we both had visions of a Balrog led attack from Moria on Lothlorien. But getting the beast to move was very hard and proved unattainable this game.
Meanwhile there was a totally epic siege of Minas Tirith with Aragorn and Gandalf stiffening the defences, until the Witch King's Morgul legions swarmed over the walls.
I played Wormtongue to keep Rohan immobilised and had armies poised to crush Dol Amaroth and the last Gondorim, along with the weakly defended Edoras and Helm's Deep. Meanwhile, Legolas was leading the elves of Mirkwood to attack and lay siege to Dol Guldur, before I could attack Lothlorien.

And that was my high watermark. My dice frustrated me for a critical turn and the the Fellowship got into Mordor and the focus of the game suddenly shifted. My efforts to hunt the Fellowship were for naught and Frodo dropped the Ring into Mount Doom.

So interesting. Quite complex. Lots of Tolkien chrome and details. Many interesting decisions to weigh. Takes a long time to set up and play. It was around 2 AM when we toddled off to bed.

Saturday morning we were joined by another Mike to play Sharp Practice with the Padre's ACW troops.

We used some Divisional commanders as Deployment Points 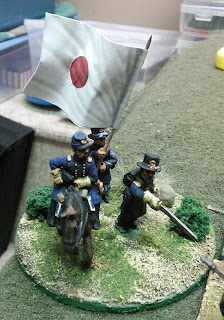 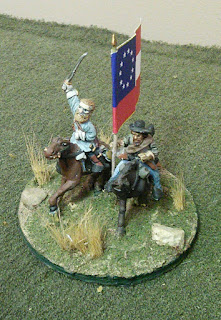 And he put out some period colour out too 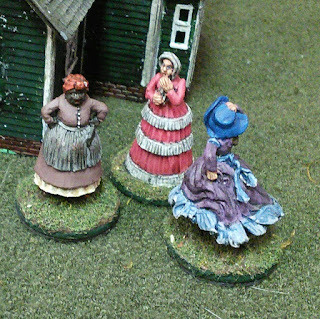 I played the Union with the two Mikes playing the Rebs. Eventually we got a couple of battle lines formed and merrily blazing away at each other. 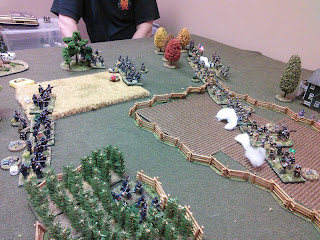 I started out giving controlled vollies which are quite effective, but eventually I found I just wanted to get rounds downrange as quickly as possible. The weight of my musketry combined with the skirmishers in the cornfield eventually told upon the rebs in the ploughed field, driving them back in disarray. A few turns with their colonel being unconscious from a Union Minnie ball helped me a lot, since he could only watch the shock mount up.

Things went quite spectacularly badly for me on the other flank though. The Other Mike then swung this skirmish formation onto my flank to great effect. In the above picture my flank group is withdrawing quite shot up. Black and white dice are shock, red dice and casualty figures are kills.

The Other Mike then fired a volley and charged into me 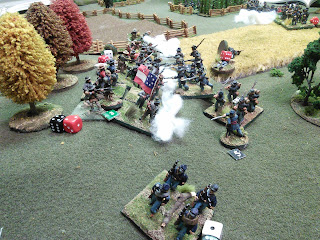 It went badly for me.

The formation in my centre had also fared badly, losing a group and their Big Man got killed by a random event.

We hadn't been tracking Force Morale but a quick calculation at this point had the Force Morale standing at 1 for the Union and 5 for the Rebs.

After a quick tidy of the table we gave Dragon Rampant a go with the Padre's Lord of the Rings kit.

The forces of Isengard were descending upon a village in the West Fold. Burn the buildings and capture the pig. The usual evil objectives. 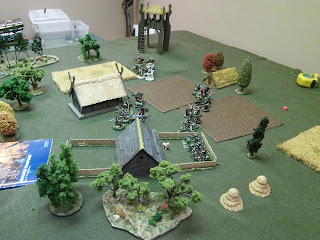 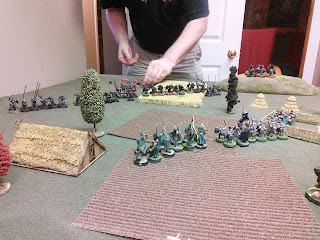 Being familiar with Lion Rampant made the game rattle along briskly. I didn't get Aragorn into things, he was busy trying to outflank the Orc line with some Rohirrim. In the meantime Gimli charged into a unit of Orc berserkers to save my crumbling centre and Eomer charged into the Warg riders. Gimli wracked up a big score of dead Orcs and Eomer was victorious.

The bowmen protecting Bakonraed the Pig thought they were going down under Orcish spears but fell back and drove the Uruks off with a final desperate volley.

The Orc Shaman did a bit of magic, but it wasn't overwhelming. We didn't try any monsters though. So I was pleased and intrigued. And unlike GW games where you have to swallow the back story and not using something leaves you at a decided disadvantage, if something like a particular spell doesn't fit the back story then don't use it.

Dragon Rampant has me looking some more at the Vendel fantasy troops again. http://www.sgmm.biz/Bloody-Day-28mm-Fantasy_c_23.html

Then it was dinner and with everyone at their cottages the highway was open, giving me a breezy drive home listening to Randy Bachman's Vinyl Tap and Saturday Night Blues on CBC 1.
Posted by James at 11:59 AM