Attended Virtual Lard 6 on Saturday. Nothing going on (thank you Covid), so I could play in both the afternoon and evening sessions, which with the the time difference meant I was playing at 0830 and 1330.
The Morning
Game One: Saving Agent Roundwood a Packing Heat game
"Boss! Boss! It's the Feds!"
Nicky "The Skinner" Scorzo swore and rolled off the sagging smelly sofa he'd been sleeping on. "Hey you mooks! Wake up! It's da Feds!"
They had been up late in the abandoned farmhouse trying to beat some information out of Roundie, who'd turned out to be Agent Sidney Roundwood and a Stool Pigeon for the Feds.
Now it looked like Special Agent Clark was riding to the rescue.
Vinnie, one of Nick's trusted torpedoes, and his moll, Gladys went to the front door. "Here dey come Boss!" Vinnie shouted as he fired a burst from his Thompson at three agents crossing the road.
Nick positioned his gunsels around the house to cover the windows and sent another of his trusted torpedoes, Benzo, with the second Tommy gun and a gunsel hot footing to the barn to try and flank any Fed flankers. "Ah jeez my shoes!" Benzo moaned as he took up position in the hayloft.
Not a minute too soon. A couple of Feds were running across to the truck. Benzo let fly with a burst through the trees.
Over at the house the heavy Boom! Boom! Boom! of a BAR slammed slugs around the door frame where Vinnie and Gladys were taking cover, dazing them both.
Vinnie sprayed a long wild burst out the door just trying to get some heads down while they rubbed the plaster dust out of their eyes. 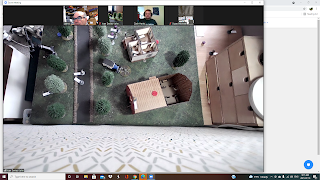 A splinter from the door frame tore into Gladys' arm. Blood ran down her sleeve. "Ow! You bastards! That was my new blouse from Macey's!" she blasted out the door with her pistol. 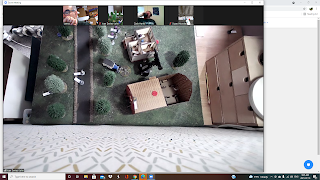 Agents ran through the fire from the barn, clustering at the van. Benzo shifted position. Barn board splintered around him but Tony in the front room started up with his shotgun. Between them, Benzo and Tony put the three agents in a brutal crossfire. 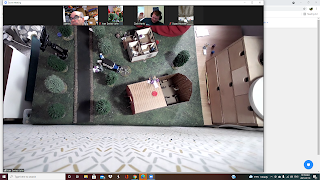 Benzo saw one G-Man go down and another clutched an arm. 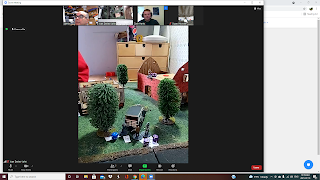 Vinnie and Gladys laid down more fire on the Feds on the lawn, taking out the deadly BAR gunner. The other two dashed around the side of the house. "Gladys! Billy! Someone cover the back!" But Gladys was intent on shooting at the big Federal Agent coming across the road. He was Big Rich, the G-Man who had been after them for months. Vinnie let off another burst.
Nick shook the plaster out of his hair. It was chaos. Bullets tearing into the house, Tony's shotgun booming away. Vinnie's Tommy gun chattering. Then BANG! The roar of a .45 exploded in the living room. Nick saw a Fed at the back window and Vinnie went down with a bullet in his back. Gladys screamed like a banshee.
Nick strode across the room, his arm out, dull grey .45 automatic extended. BOOM! The Fed dropped out of sight with the top of his head missing. "That's how you do it kids" he growled. 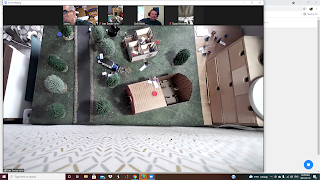 A crescendo of violence rose from the front room as Tony and Benzo poured more lead into the G-Men around the truck until it suddenly stopped. "Hey Boss! Dem Feds is buggin' out!" 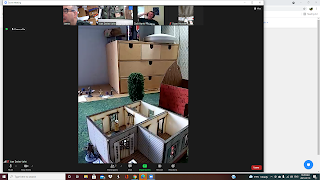 That was my game of Packing Heat, an as yet unpublished skirmish game variation of Sharp Practice. It is for very small forces, essentially one card for every figure in your force. My opponent (in Virginia) and I were shown the full rules (by the author in Wales) and they cover everything from Gangster era to modern cops vs Russian gangs or Mexican drug cartels. Also covered is WW2 for section on section fights. I suggested it would be also very good for my The Expanse oriented 15m SF, or JTF2 vs Taliban. We even speculated on a hero like Batman taking on a bunch of low level goons. Hero Cops are covered for more action movie style shoot outs, or in my case hard boiled PIs taking out a gang of thugs to rescue the kidnapped heiress. The game is intended for a very close in 2 foot by 3 foot size playing area. The stealthy approach is already over when the game begins but some abilities such as "Scout" or "Recon" accentuate the sneaking up aspect of Covert Ops.
This will be a great game when it comes out. I can see it replacing Rogue Stars and Black Ops for me.
After lunch,
Games Two and Three: Day of Days, Brecourt Manor for Chain of Command
I was pretty excited to get into this game. Refighting the most famous action by one of my heroes, Dick Winters on a gorgeous table was great. The only downside was not being able to see it up close. I followed the build on Twitter and the HQ dug out with it's telephone and radio set up is really nice. If you get to Fall-In/Historicon in November you have to check this game out. (the game host is in Virginia!)
It moved so fast we played it twice. First I was the Americans. I sent Winters with 3 men to the left of the picture. Lipton with 2 men and a .30 cal. team set up at the angle of the hedge and Compton with 2 more guys and the second .30 cal. team went right to attack gun no. 2. Once Winters got to the hedge beside gun no. 1 I took advantage of double 6s to launch my attack. 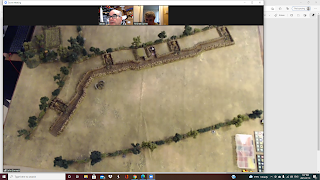 Lipton and his group suppressed the MG42 nest at the angle of the trench line. Winters and Compton threw grenades and then jumped into the gun pits for hand to hand. 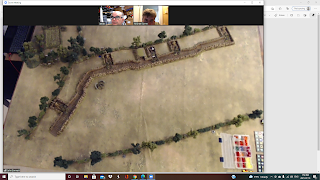 Meanwhile a reinforcing section of German grenadiers arrived, advancing across the field. Being in the open they quickly attracted a lot of .30 cal fire and broke and ran back to the far hedge. Winters took out his gun and spiked it. Compton's attack wiped out their gun but to their own cost. This however broke the German Force Morale so it was game over before the Germans had fired off a 24 shot fire mission from their howitzers. 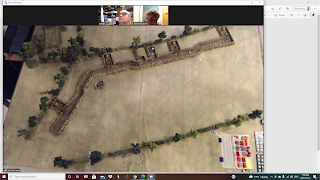 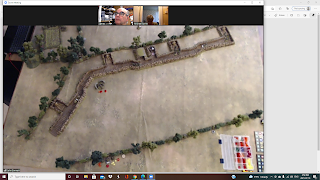 So that only took 90 minutes. After a quick reset, my opponent in Scotland and I switched sides. He also sent Winters to gun no. 1 and Compton to gun no 2 while Lipton and a .30 cal formed a base of fire at the angle of the hedge. 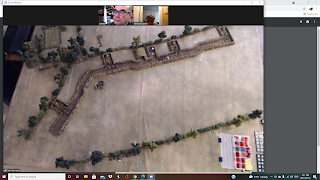 I got a reinforcing section on faster, moving them to reinforce gun no. 1 but they attracted MG fire and took grenade hits. When Winters attacked I had less shock and more MP40s this time so when the dust cleared my section leader and Winters were facing each other in a trench filled with corpses. Winters blasted my JL with his carbine.
Meanwhile Compton had stormed gun no. 2 getting his whole group into the trench and started moving along it. I got 2 more grenadier sections on table, but too far away to do much good, and my Force Morale and Command Dice were disappearing fast. 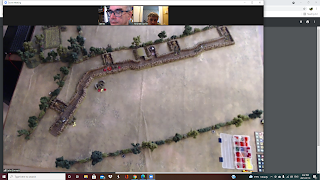 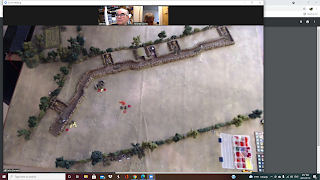 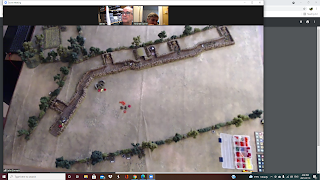 Compton moved past the ammo dugout and HQ dugout to attack the no.3 gun from the rear (so no heavy cover advantage!) while Lipton approached form the other side of the hedge. It was a forgone conclusion as I lost the game three different ways. My opponent had rolled three 6s so turn end, meaning my broken team running across the field was routed (Force Morale loss), a gun team was wiped out (Force Morale Loss) and my JL by gun no.1 was killed (a third FM loss). 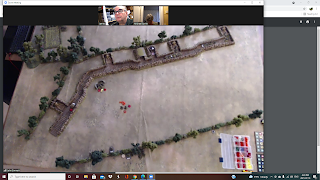 I did get bragging rights for having completed more of the Fire Mission than any previous German player. But my opponent's attack carried more gun pits than I had managed. 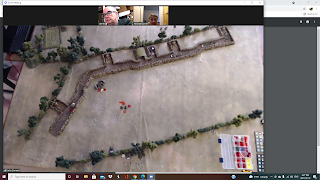 So that was another super fun Virtual Lard gaming day.

A virtual game day certainly has a better drive, no parking problems and no line ups, crowds or gamer funk like at conventional Conventions. Being able to play with people from Virginia and the UK was pretty cool. The games were really excellent too. The only downsides are having to make your own lunch, no close ups of the lovely games and the Dealer Area was, let's be honest here, nonexistent. Although I was done by about 5 or 5:30 which is an early end to a convention day really.