Got some hobby time on Canada Day and finished basing my fleets. 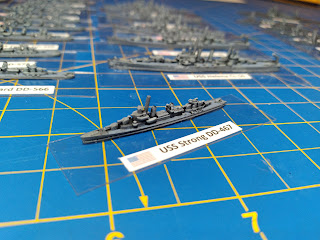 After dinner I tried a small game to learn the rules. Each side got a cruiser and four destroyers. 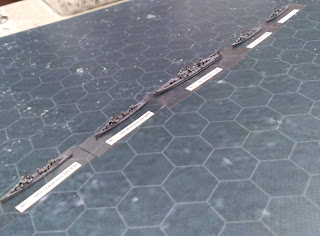 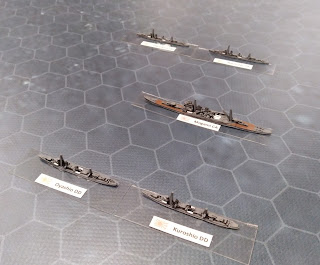 Everyone starts trying to cross Tees a turn too late.

Honolulu took a torpedo aft, knocking out the X turret. But her guns keep getting hits on Mogami, who doesn't roll as well in return.

So a bloody draw. Although I wasn't keeping as close an eye on the Damage as I should have. Both cruisers passed the "crippled" threshold before I was aware. Need proper ship rosters to track torpedoes fired and Damage thresholds.

Victory at Sea seems very focused on classic big ship actions in the Mediterranean and Atlantic. Night spotting and radar are quite basic which is unfortunate since many of the small naval actions in the Solomons occurred at night. Destroyers are treated very basicaly as well, with one fire dice and may as well be throwing marshmallows around once they've launched their torpedoes. The torpedo rules seem odd too. But that might just be me.

Still something to toodle around with until I find a better set of rules. A chap on Twitter is helping with a set of rules that seems just perfect, focusing on destroyer/cruiser actions.