A few weeks ago an old friend, who had moved out of Province and lost touch 14 or 15 year ago, called out of the blue.

"I'm getting out of Wargaming. I'm going to send you a box."

A couple of weeks later, this arrives. 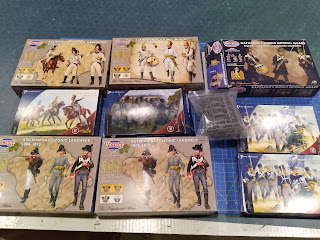 Scott added in the Austrian cavalry set. So now I have a pretty good sized army of Austrians, less artillery.

If my back of an envelope math is correct I'd have 14 or 15 battalions of assorted infantry and two units of cavalry. The Victrix boxes come with 2 mounted commanders each, so there's brigade and army command sorted. Just need artillery, and limbers, and a caisson. The rational part of my brain says "just do enough for Sharp Practice, you fool!"

Perhaps I'll start with a Sharp Practice force for 1809 to fight my Bavarians and see how I get on. Fortunately both the Perry and Victrix sets have lots of command, so getting enough Big Men won't be an issue.

The observant will notice to the right some French Middle Guard in greatcoats and two boxes of Perry Prussians, plus a partial set of Perry British flank company without it's box. I've already started on the Prussians, these extras will provide much needed Fusilier battalions. I had, for a few days, thought of converting the French in greatcoats to Lutzow's Freikorps with extra Prussian heads, but shaving off epaulets would be tedious, so I shan't bother. I'll donate the French and British to the Hot Lead Bring & Buy.