Spoiler Alert: Unless you've already read The Silmarillion (and honestly, why haven't you?) then I might spoil a few things for you. Read on at your peril!

I was anticipating The Rings of Power with a mix of trepidation and cautious hope. A "Let's wait and see" approach.

I mean, it couldn't be anywhere near as bad as that pile of flaming poo that was The Hobbit movies, right? 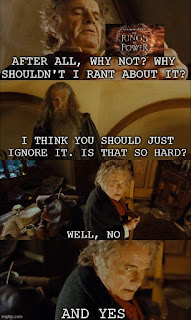 Parts are really quite good, and yet other parts are really quite bad. Grand CGI visual landscapes and a very fine soundtrack are nice, but only good writing can make a good story.
The Professor once described his mythical world as a vast tapestry and he had made the main branches of the story, but around the edges where things were vague, he felt there were places for other creative people (painters, musicians) to participate in the work of sub-creation. He distrusted drama for odd reasons, even though he was an enthusiastic participant in student amateur dramatics.
Read Leaf by Niggle to get an idea of Tolkien's view of the artist, the artistic vision and process, and it's spiritual merits.  Tldr: Art, as an act of sub-creation, participates in, and with, the Divine Creation.

The origins of the Hobbits, as portrayed by the Harfoots, is quite canonical, but was only vaguely described by Tolkien, so there's lots of room to play about in. I'd like more time with them. Lenny Henry as the leader of the Travelleresque Harfoots is quite brilliant. But no, we go straight to a very headstrong Galadriel jumping off a ship on it's way to Valinor and trying to swim back to Middle Earth! Then a whole episode wasted with her on a raft in the middle of the ocean. And there's only going to be what? 6 or 8 episodes? Looks like we're plunging towards the Numenoreans capturing Sauron and bringing him back pretty quickly. Sauron corrupting Ar-Pharazon and bringing about Numenor's fall will be the plot arc for Season 2 I'm guessing.

It seemed a cheap way to get Galadriel to Numenor, and thereby getting the Numenoreans into the story. Numenor is quite well portrayed, just the way I imagined it really. But it is the center of a vast globe spanning seafaring empire, so Numenoreans showing up in Middle Earth to trade with the elves and dwarves isn't a stretch is it?

The dwarves are OK. But when did dwarves become comic-opera Scotsmen? It's a cliché really. Even though Amazon seems to have set up race-baiting to shut down any criticism of the show, I really think they missed a diversity point by not giving Disa (Durin's wife) a very canonical beard. Doesn't have to be a great big bushy beard, but a short, soft, feminine beard would do, maybe with some gems braided into it. The character is still quite good though. Although we already know that they're going to release a Balrog, probably in the season finale. Although maybe they'll save that for Season 2, but I've seen a Balrog in clips for the show. Thus is a perennial problem with prequels anyway.

Elrond's hair bugs me too. I guess the Second Age is the Age of the Mullet. The elves in general bug me. As usual they've gotten the whole motivations of the elves and their relationships with men, Middle Earth, and the Valar rather out of tune. Galadriel is portrayed as way too immature and headstrong to have been around since the first rising of the moon.

Some people who are also Tolkien fans, love the parts I hate, and I hate the parts they love. I remember when Ralph Bashki's Fellowship of the Ring came out a reviewer observing that you can't make every Tolkien fan happy with your portrayal of the imagined.  Rings of Power, I think, is having the same problems.

I don't know. I'll keep watching, I guess. I don't hate it, but it doesn't excite me like The Expanse did.

Or perhaps eventually the irritating niggling details will bug me enough that I'll take Gandalf's advice and ignore it.