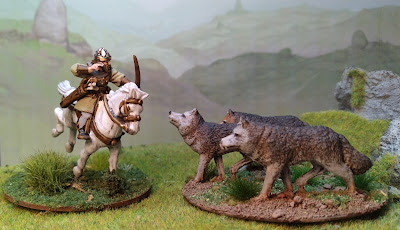 I imagine the Rohirrim were mustered by feudal obligation based upon wealth. A man with a certain wealth in herds would be obliged to appear for the muster with a horse, or horses. Bow for the poorest of the herdsmen, then perhaps spear and shield, then arming themself with a mail hauberk for the richest. Those without any herds of their own beyond perhaps a few pigs would serve on foot with bow or spear and shield.

Being a cavalry based army, light cavalry would be essential for scouting, flank security, raiding, and pursuit. 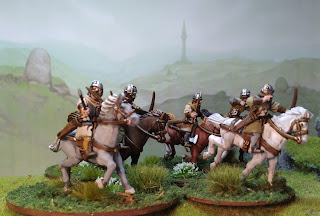 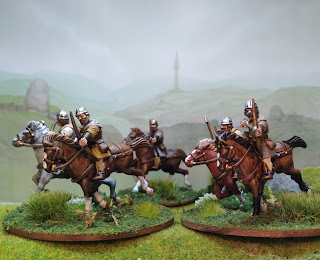 I looked around at various kits. The Gripping Beast Late Roman light cavalry could get me horse archers and spear armed light cavalry, but the tunics were obviously Late Roman with the embroidered patches.

The Gripping Beast Dark Ages cavalry, essentially an unarmoured version of the Gothic heavy cavalry I already use, don't have any option for bows. 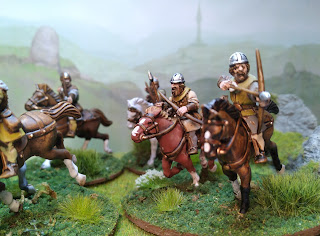 Then the Oathmark range added a Human Cavalry set. 15 figures with options to equip all with spear and shield, or bow, or hand weapons. So I added a box to my order for Lion Rampant 2 to maximize the postage. If I liked them I'd get a second box to do up as unarmoured Riders with spear and shield.

The horse poses seem odd at first, but they've grown on me, or I've gotten accustomed to them. The tiny pads on the points of contact make them hard to balance. I'm guessing that the designer assumed everyone would just glue them to the 25mm x 50mm rectangular bases provided. I ended up using superglue to affix them to the nails I like to use during painting, which was problematic when it came time to remove them.

Lots of parts; legs, torso, left arm, right arm, head, quiver, belt pouch and optional knife. I also cut axes from hands and hung them from a few saddles. One figure started giving me problems while I was lining up the arrow over the hand holding the bow, with parts sticking and moving around on me. I'm afraid I turned the air blue around Mikey's delicate ears with all my F-Bombs. The faces are on the soft side, and a few look rather gormless, so I tried using a spare Gripping Beast head.

For painting I used a limited pallete; 2 light browns, 2 greys, a light green and the muted yellow is Vallejo "IJA Uniform", but it looks like the soft colour you'd get from natural dyes. I just alternated the colours on the pants and tunics. The brown ink is doing a lot of the heavy work to be honest.

The set comes with 15 very nice 25mm x 50mm plastic bases, but I don't see horse archers being all ranked up no matter what the Oathmark rules say. I initially thought about the 3-2-1 basing popular in Lion Rampant circles, which looks quite good and is effective, but I didn't like how crowded 3 figures were on my large round base. 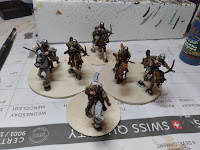 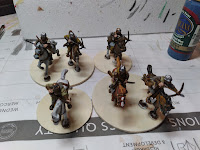 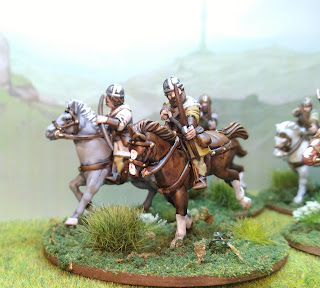 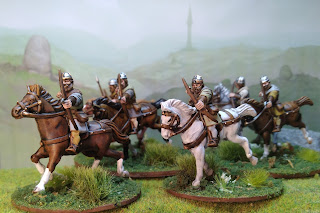 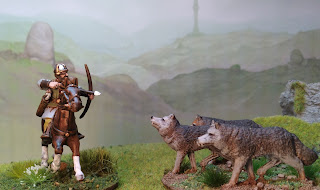