I first met Dan (aka "Pasha Dan") many years ago at a Late Empire game he was running at a MIGSCON, when it was still at the Hamilton Holiday Inn, so early 90s I think. He is a professor of classical history and was an enthusiastic play tester for Legion & Empire as well. So Dan and Romans and I are a common theme.

When I painted my A&A Severan era (3rd century) Romans in 2019 Dan excitedly called me, proposing that he fight them with his later, more Diocletian era (4th century) Romans. Well, our schedules never let us get together and then Covid ruined everything and I haven't played with Dan since well before the pandemic hit. 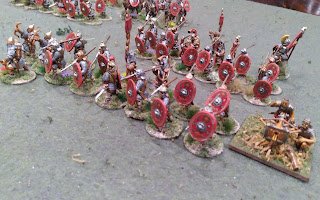 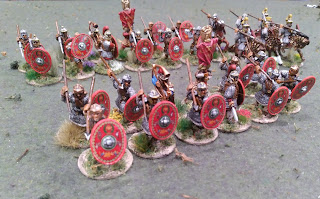 He is now available and brought his cohorts and foederati down to play using Lion Rampant last night. Monday being a holiday, we could shift our usual time slot to accommodate people's long weekend availabilities. Patrick and Mikey joined us to pushed lead, roll dice and gently tease each other.
Each army totalled 74 points. Scorpions were counted as crossbows. 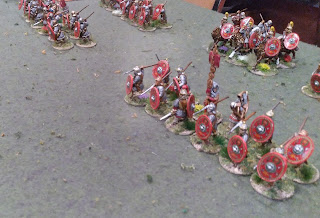