Bavarians With a Tenuous Family Connection

The first step towards completing Phase 1 of my Master Plan is this battalion of Perry metal Bavarians. 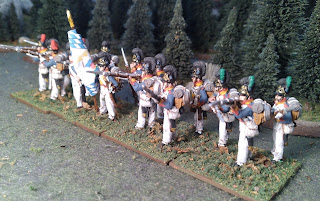 To complete my brigades I need two battalions of fusiliers. I would have preferred marching poses, but that would require 4 figures per base to look right, and that would have resulted in left over figures, which I can't stand. 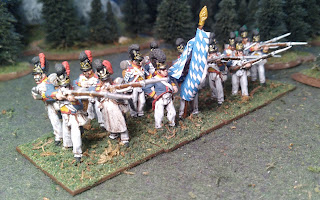 Whereas a firing line can look, at least in my opinion, a little more dynamic (read chaotic). To this end I got a selection of line and flank companies in firing line with the 1812 standing command. 5 boxes, 30 figures, no left overs. Yes, I could have used up left over marching figures in vignettes around wagons or something, I suppose, but I didn't think of that. Sue me. 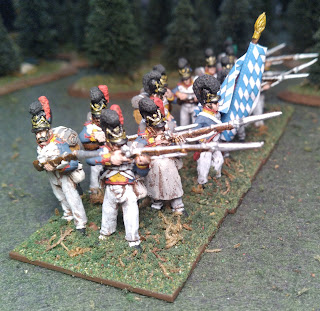 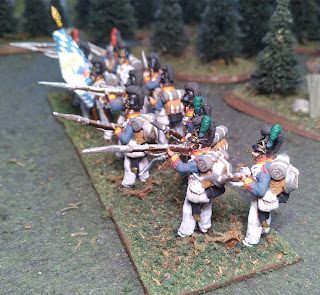 Maybe when I recruit the 3rd Brigade. 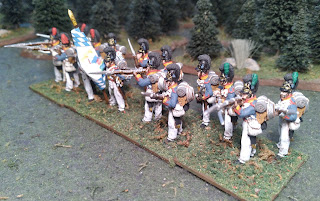 Since these figures won't be used for Sharp Practice, I could use different facing colours. The yellow facing with red piping for IR 4 and 8 is quite striking, and my confidence with painting piping has improved dramatically since working on Russian artillery last summer. The fact that all the belting rather obscures the facings is unfortunate and made them a challenge to paint. It's nice that these figures are properly geared up with haversacks and canteens etc, but that also increases the challenge. We spend so much time worrying about getting the coat colour right, but the average Napoleonic infantryman has so much junk hanging off him we can only see his sleeves really. 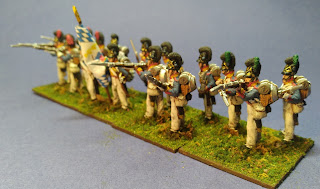 I used some 45mm x 40mm plastic bases that came with a box of Perry Prussians, so that the more dynamic poses could be spread out a bit. 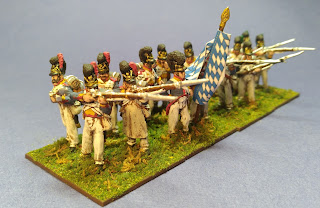 Another nifty thing, this unit being IR 4 Sachsen-Hildburghausen, is that before the reforms of 1799, when the Bavarian army abandoned the hideous Rumford uniform, this regiment was Fusilier Regiment No. 5 von Wahl. Wahl being the surname I was born with, and my ancestors emigrated from Bavaria around the time of the American Civil War. I like to imagine a distant ancestral connection. 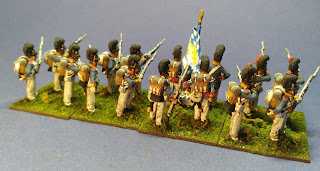 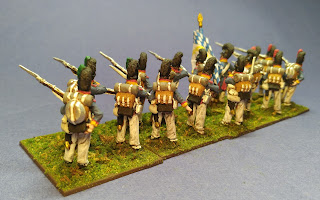