A raven squawked at them from a pine tree expectantly. Grôn looked at the rocky hill sides around the valley, admiring the stone and wondered how easily it would be to quarry. "Our feathered friend seems to know something."

"Orcs you think?" said Sami, looking up from the camp fire.

Their Captain, Thorkl Stonehammer, stomped over from the King's fire. "Right you lumps! Arm up and fall in! We've got a fight coming!"

Grôn, Dani and Sami helped each other don armour and fell in around their banner, a rampaging mountain black bear and waited. Grôn looked at the hillsides around them. "Nice stone here" he said.

"What would you know about stones?" Dani teased. "Except maybe you are one!"

"Ach! You're a stone!" Grôn adjusted his shield and tightened the grip on his spear.

A harsh, blaring horn echoed up the valley towards them. "That'd be Orcs then" observed Sami, putting out his pipe. "Their horns have a terrible mid-range. It's the metal they use, cheap tin or bronze. Or horn." Sami patted the silver horn he carried affectionately. He'd made it himself in his workshop.

After painting the shield wall of new Dwarves, I had to set up a game and get my Dwarf army on the table again. So I played a solo battle over a few nights on some thematic terrain. Each army is 43 points in Dragon Rampant, with some ideas ported over from Lion Rampant. The Dwarves have 37 figures. The orcs and goblins have 96. The objective is to hold the pass.

The deep throated, dragon headed horn of the King's company called out and the Dwarves began tramping up the valley to take position near a big pile of rocks that cut the valley in two.

Soon Grôn could see hunch backed goblins loping along towards them beneath a black and red banner, waving spears and curved scimitars belligerently. Thorkl lifted his warhammer. "Ready javelins!" When he judged the goblins close enough he dropped the hammer and the rear rank of the shield wall hurled javelins and heavy throwing axes at the approaching goblins. Several fell. The others screamed and ran away.
"That was easy" someone mumbled.
"Shut it you!"

Behind the goblins came bigger orcs, heavier armoured and carrying long heavy polearms to smash through their armour. Companies of Dwarves armed with the best hauberks and two-handed axes and great swords moved past the shieldwall on either flank.
Baldor Foe-Cleaver, hero of the bridge that now bears his name, strode forward as well. The Dwarves clashed spears to shields and cheered him on. 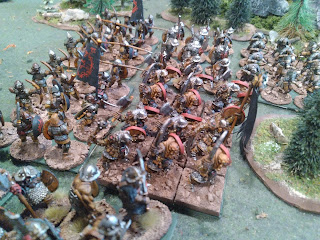 Screams and the crash of axes on helmets rang out and the rocks were turned black with orc blood. 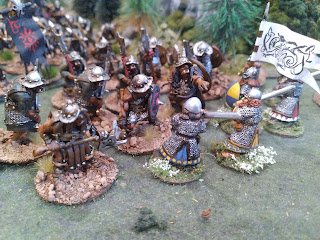 Baldor jumped on the rock in the middle and taunted the orc host in the common tongue. "I  am Baldor, son of Fundin, son of Kim! Holder of the bridge and slayer of trolls! C'mon then if you think you're 'ard enough!"
A company of orcs armed with heavy shields and axes screamed in rage and swarmed up the rocks to get to him, but his great sword swung in great vicious arcs, cleaving heads from shoulders and limbs from torsos. 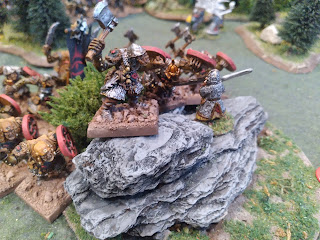 The fight in the pine copse at the foot of the hill swayed to and fro. Eventually the great uruks fled, leaving most of their number dead . But several dwarves were dead too and the company retired with only half their strength. 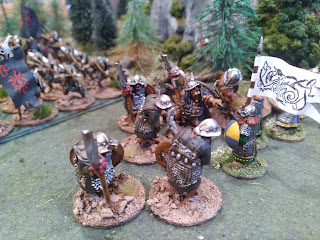 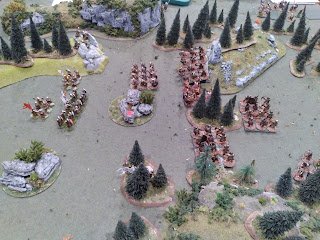 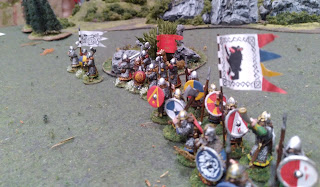 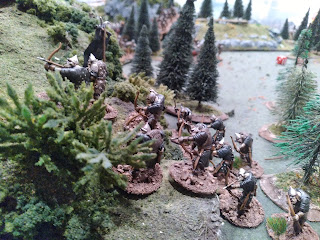 The orc warlord, now brought his third wave forward and sent his goblin archers to climb the hill over looking the battle field. The orcs fighting Baldor fell back, rallied and surged forward again. Again Foe-Cleaver swung, the heavy blade smoking with black blood in the sunlight. The orc captain was struck down, his head and golden helmet rolling at Baldor's feet. The remains of his company fled in terror. 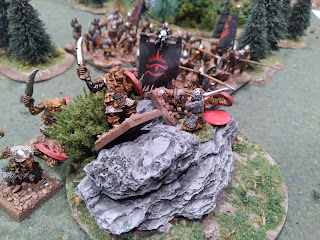 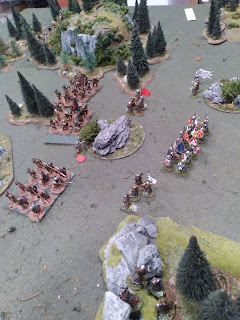 Thain rashly lead his company of Hall Thegns forward to get to grips with the orcs, hoping that if he can defeat the orc warlord's company, he can finish the battle. 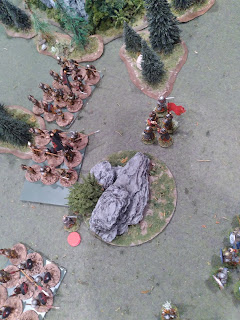 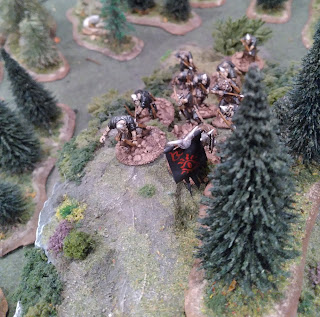 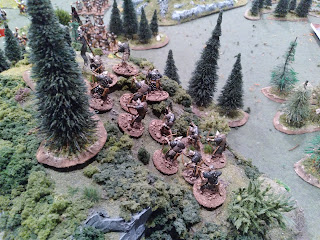 The orcs stop to shoot their black feathered arrows. An unlucky barb hits Thain in the eye, felling him! A ripple of doubt washes through the Dwarven ranks.

With tears and screams of rage, his Thegns charge forward, dying to avenge their Oath Lord.

Baldor meanwhile jumped down from his rock to finish off a panicking company of orcs. He then charged a second in the flank cutting down a third of them in his first attack and routing them thoroughly.

Thorkl rises his warhammer again. "Forwards! To the King!" Keeping shields locked, they tramp past Baldor's bloody rock. Orc arrows thunk into shields. Shields crash into shields, spears stab, Sami takes a spear thrust in the shoulder, orcs fall cursing and stabbing as they die, Dani gets a wound in his neck. The Dwarves fall back battered to regroup. 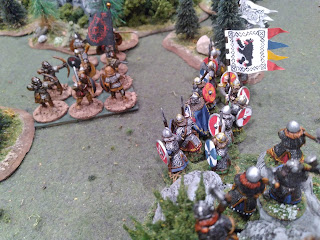 Grôn raised his shield as more black orc arrows patter down like hail from the rocky hill above them. Axemen charge out to strike the orcish warlord in the flank, breaking his company. The goblin archers on the hill fire a few more barbs and then melt away before the Dwarves can climb up to get them. 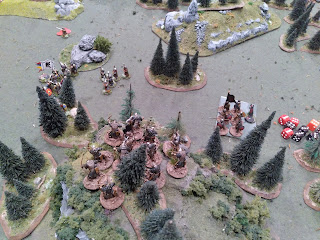 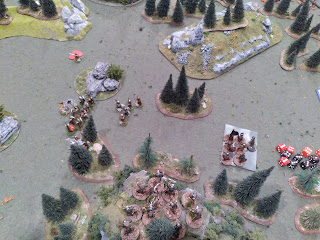 Singing slow, mournful dirges, the Dwarves cleared the field. The heaps of orcs are left for the wolves and ravens after their arms are scavenged for the scrap metal or trophies. Their own dead are set aside and a cairn built over them, with Thain in their midst. As Grôn cut turves to lay over the barrow he passed Baldor, who was getting his many wounds tended. Baldor regarded the golden helmet of the Orc captain he slew and then tossed it on the grass to light his pipe.
"Well!" he growled around the pipe stem as he struck flint and steel. "That was a proper cock up!"
So ended a bloody, close fought victory for the Sons of Durin. The post battle war council lead by Baldor has determined that the Dwarves really need some missile capability, and more shield wall troops. The Dwarves had taken 19 casualties out of 37. The Orcs and Goblins suffered 84!
I felt that the 'heavy foot' profile didn't feel orcish enough. I may try 'bellicose foot/warrior' instead next time.